It was a beautiful day on Mt.  Kailasa, where Lord Shiva and Goddess Parvati were spending time together with their two children, Ganesha and Skanda.  The two children went off to play in the foothills of the mountain while Shiva and Parvati were giving blessings to devotees.

On that day Lord Brahma, the Creator-God, decided to visit Mt.  Kailasa to worship Shiva.  On his way, he saw Skanda at the foothills of Mt.  Kailasa, but ignored him, and went past him without paying his respects.  Lord Skanda got angry and, mischievous as he was, wanted to bring Brahma out of his egoism.

He patiently waited until Brahma returned from worshipping Shiva, heading back to Satya Loka where he resides with his wife Goddess Saraswati.  When he passed Skanda, ignoring him again, thinking that he is just a child, the little boy Skanda ran to Brahma, asking who he was, what he does, and what he is proficient in? 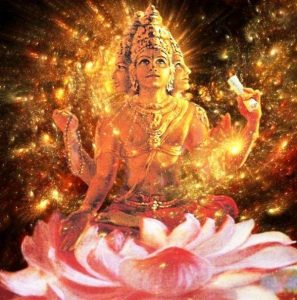 Brahma replied that he is Brahma, the creator of the beings of the three worlds and that he is proficient in the Vedas.  He proudly said that he was creating the beings who have knowledge of the Vedas, and started to recite the Rig Veda text, beginning with the pranava (the primordial sound “OM”),

The Devas (Divine Beings) were worried and surprised by the absence of Brahma.  They went to Lord Vishnu complaining that his son, Brahma was missing, asking for Vishnu to help them find him.  Vishnu, the Protector-God , came to know what had happened. He wanted to leave it to Shiva to attend to this matter, since Vishnu couldn’t win the argument with Skanda.  Vishnu, with the other Devas, went to Shiva and explained the situation. 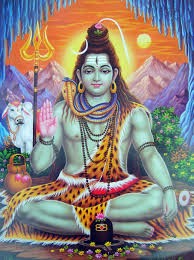 Shiva decided to deal with this himself and went down to see his beloved son, little Skanda.  He with all three of his eyes stood watching Skanda play.  Then he went near his little boy with affection, embraced him and requested him to release Brahma.  Honoring his father’s request, Skanda released Brahma immediately.  Shiva was pleased by his son’s obedience and sat him on his lap.

Then, Shiva asked, “Do you know the meaning of the pranava?”  Being the son of the Supreme Being, Skanda smiled.  He mischievously replied that he does but will only tell the meaning if Shiva was prepared to learn the mantra in a proper manner, as a shishya (disciple) learning it from a Guru.

Agreeing to Skanda’s conditions, giving the proper respect to a Guru by a disciple, Shiva knelt with folded hands and bowed head, before his young son Skanda, the Guru, with great veneration and learnt the mantra from him.  Then Shiva blessed his son, giving him the name Swaminatha, meaning “Guru to the Guru himself.” Brahma went back to his duties, never to ignore anyone again, no matter how young they were.

The hillock on which this took place thus came to be known as “Swamimalai.” Today, thousands of devotees yet go to this holy place, seeking “True Knowledge” from Swaminatha.

Through this act of giving the proper respect to Skanda, Shiva, wanted to show the importance of the Guru.  He also wanted to show that we should never disrespect anyone however young, small or insignificant you may think they are. 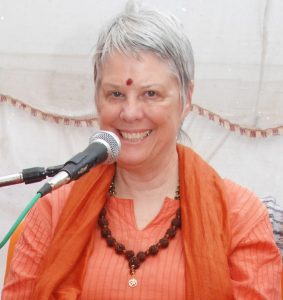 Devas, Gods and Goddesses, oh my!   Is the Creator-God really different from the Protector-God?  And who is Shiva anyway?

Mythology activates a part of your brain that nothing else touches, which is why superheroes are so popular.  I read Ovid’s Metamorphosis to my children, followed by the rich and meaningful tales from ancient India.  But the Western-trained mind asks, “Just how many Gods are there?”

The answer is simple.  One.

Though called by different names in different languages, different times, traditions and religions, the One is still the One.  Just like water, agua and pani all refer to the same liquid, each name points to something beyond the word being used.

You probably have many names, from a childhood nickname, relationship names like “Sis” or “Mom,” screen names, a professional name, pet names used by those closest to you, and maybe even a Sanskrit name to invoke your deepest sense of spirituality.  Each name brings forth a different quality from you, while you are more.

In India, the One Reality is called by different names when performing different functions.  When creating, the One is called Brahma, expressing qualities that makes creating possible:  innovative, focused on the moment instead of the future, and with quick-trigger reflexes.  Yoga’s sages described Brahma, even seeing him in Divine visions, thus making us able to depict him in paintings, statues and stories. 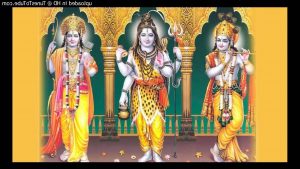 Vishnu is the name of the One Reality while nurturing and protecting that which Brahma created.  And the Goddesses are the energies that they use in their various tasks.  Since we’re talking about the One Divine Reality, how many functions are possible?  Thus, how many names are possible?  Millions!  But they are all forms of the One.  The Sanskrit word, “deva,” is the root word for the English word, “divine.”  Devas are Gods, Devis are Goddesses, each of which is the One Reality in a different guise.

This glorious multiplicity is not limited to the celestial sphere, for the One has become everything that exists, including you and me.  The goal of yoga is to know yourself as the Divinity you are, thus being able to see the One shining as all.  Yogis usually name the One as Shiva, which is technically “Paramashiva,” meaning the One who is beyond your idea of who the One is. 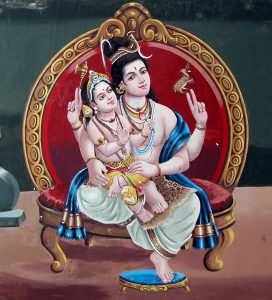 In this story, the many forms of the One play out a drama complete with insult, confrontation, imprisonment, a “presidential pardon,” all superimposed on against a mystical background of the ever-reverberating primordial sound.  Then sweetest of all, the great Shiva takes on the role of a humble student, learning from his own son, Skanda, while knowing that Skanda got everything from Shiva himself.

Nirooshitha says that she chose this story because it’s all about the Guru principle.  “This story is from Skanda Purana, as is Shree Guru Gita.  This is one of the stories, which I was told and read many times while growing up. For me this story is about Shiva being himself and being his own son.”

It’s really a picture of your own condition.  While you are currently experiencing the limitation of human individuality, you are more.  To find the more, you go to one who knows, one who serves by sharing that knowing with you – the Guru.  While bowing to the Guru, you’re bowing to your Self, one really you but simply in another form.  It’s all done with mirrors!