Lord Ram, the seventh incarnation of Lord Vishnu, is well known because his incredible story was passed through the generations of oral tradition and written down by the Sage Valmiki.  One of the oldest, largest and most ancient epics in world literature, The Ramayana (RAWM-AAW-yuh-NAW), it has been adapted or translated into approximately 300 other languages.  It is presented in ballets in Indonesia, Malaysia, Myanmar, Sri Lanka, Thailand, Laos and Philippines.  I grew up with Ramavataram, by Kavi Kambar, in the Tamil language.  The compelling details of Lord Ram’s story is presented in seven kandas or parts.  Let us begin! 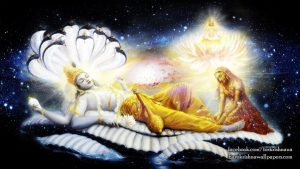 One day in Vaikuntha, Lord Vishnu was in his “Anatha Sayana,” blissful sleep on Adishesha, his five-headed cobra which personifies the energy that becomes the universe.  Feeling someone holding both of his legs very tight, he woke to see Goddess Lakshmi, his consort.  He asked why she was holding his legs so tightly.  She replied that it is to keep him from leaving Vaikuntha, as it has become a ritual of him leaving so often to take different incarnations to save the universe, always leaving her alone in Vaikuntha.

With his usual smile, Lord Vishnu said it is his duty to go on such journeys to protect Brahma’s creation.  He continued, “My next incarnation is to show how a man should live in the world.  If you want, I will take you with me.”  In joy, Shree Lakshmi says, “I will show the universe how a woman should live!” 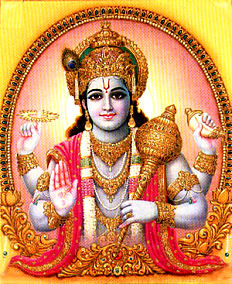 Adishesha hissed, saying, “O Lord, when you were going on these journeys, the only satisfaction I had was in keeping my Goddess safe.  But now you both are leaving me here alone.  What have I done to deserve this type of punishment?”  As Lord Vishnu began to reply, “Okay, I…” he was interrupted.  Panchajanya, the conch in his left hand, and Sudarshana Chakra, the spinning disk-like weapon in his right hand, softly said, “What about us, then?”  Smiling again, the Lord said, “Alright, I will take all three of you with me to be my brothers.”  All were happy.

Lord Vishnu added, “I need to give the opportunity for my dear gate keepers, Jaya and Vijaya, to return to me as well.  This will be their second, out of the three births they need to take because of the curse by the four sons of Lord Brahma.”

Dasharatha was the crown prince of beautiful capital city Ayodhya of the kingdom of Kosala. He was the son of King Aja, of the Kosala kingdom.  Married to Princess Indumati of Vidarbha, they named their son Nemi, but he was widely known as Dasharatha, the one with a chariot that moves in all ten (das) directions, as the name describes.

Dasharatha was a supreme archer, able to hit his target by merely hearing the sound of movement.  On a dark rainy evening, hunting near the banks of the Saryu river, he heard the sound of a deer drinking water.  Without hesitation, he shot his arrow in the direction of the sound.  The arrow found its target, but Dasharatha was shocked to hear a human cry.  Devastated, he ran to find a young boy lying on the river bank with an arrow in his chest. 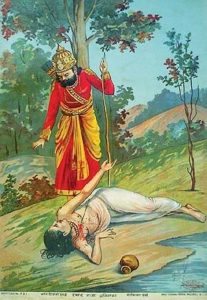 The boy, in unbearable pain, said that he was Shravan Kumara, who lived in a nearby hut, taking care of his blind parents.  He had been collecting water from the river in a pitcher, which created a sound like a deer drinking water.  He asked the prince to take the water to his parents and tell them what had happened.  Then he asked Dasharatha to pull the arrow out of his chest, to liberate him from the miserable pain and to let him die.  With great regret, Dasharatha pulled the arrow from Shravan’s heart.  Shravan died.

Dasharatha, with a very heavy heart, took the water pitcher to Shravan’s blind parents.  The old couple, eagerly waiting for their son, learned what had happened and that their son is no more.  The devastated couple cursed Dasharatha, “Just as we are dying due to the unbearable separation from our dear son, you will also have the same fate!”  This made Dasharatha miserable for a long time but, as time passed, he lost that painful memory.

In time, succeeding his father Aja, Dasharatha ascended the throne of Ayodhya.  He was such a great warrior such that he even helped Indra, the King of Devas (Gods), to fight Asuras (Demons).  A mighty king, he was considerate to all his citizens, ruling the country justly, leaving no room for criticism.

Dasharatha married Kausalya, a princess of Kosala.  Though they were happily married, Kaushalya was unable to bear any children for the Ikshvaku dynasty.  Dasharatha then married Kaikeyi, from the Kekeya kingdom, promising her father Ashwapati that his grandson will be the heir to the throne.  Again with no luck having children, he then married Sumitra from the Magadha kingdom.

Out of the three wives, Dasharatha was very fond of Kaikeyi; it is said that he loved her the most.  This may have been due to the support she gave him during wars.  Kaikeyi accompanied her husband in most of his battles.  She had the heart of a warrior and performed better in battle than most men could.  On one occasion, Dasharatha was injured badly in a war in the Dandaka forest.  Kaikeyi saved him by driving his chariot away from the war, then mending his wounds and taking care of him until he regained his strength.  Praising her devotion and strength, Dasharatha promised to fulfill two wishes for her.  As Kaikeyi didn’t have anything to request, she said that she will use the boons when she needed them. 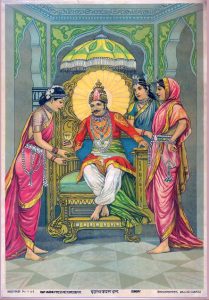 Time passed, but they had no children.  Dasharatha was anxious to produce an heir to the throne, so he performed the Putra-Kameshti Yaj~na (a fire ceremony for the purpose of having a son).  Lord Agni, God of fire, was delighted by the sacrifice.  He appeared from the fire and gave Dasaratha a pot of “payasam” (rice porridge), to be consumed by his wives so that they would bear children.

The righteous King Dasharatha first gave the payasam to his eldest queen, Kausalya; she ate half of it.  Then he passed it to Sumitra, who ate a quarter of it.  Then he gave the rest to Kaikeyi, but she ate only half of the remainder and gave the rest to Sumitra, who finished it.  As promised by Lord Agni, all three of them were blessed with children — four boys: Rama to Kausalya, Bharata to Kaikeyi, and the twins Lakshmana and Shatrugna to Sumitra as she ate from the payasam twice.  Dasharatha was in eternal joy.  Rama is the incarnation of Lord Vishnu, Bharata the Sudarshana Chakra, Lakshmana is the incarnation of Adishesha and Shatrugna the Panchajanya conch.

The four children grew day by day.  Kaikeyi was so fond of Rama, sometimes she would take care of Rama’s needs before taking care of herself or her own son Bharata.  Everyone saw Kaikeyi with Rama even more than with his own mother, Kausalya.  Dasharatha was very happy about this, as he was worried about the promise he made to Kaikeyi’s father when he married her.

Rama and Lakshmana were inseparable, as were Bharata and Shatrugna.  The pairs did everything together:  eating, playing and studying together.   They were well educated, both in the Vedic lore as well as a king’s martial arts.  Sage Vasishtha, Dasharatha’s kula (clan) Guru taught them everything they needed in life and to rule the kingdom well, when their time would come, after their father.  Soon they grew into young men.