Balarama and Krishna had become teenagers.  While Krishna was the savior of Vrindavan, he was also the naughty prankster of Vrindavan.  His naughty work, called the “Leelas” were a nuisance for the young Gopiis (maidens), so hard to take, yet they enjoyed them very much.

Krishna hid near the Yamuna River where the young Gopiis went daily for their bath.  He stole all their clothes, leaving them stuck in the water for hours.  He would bring mouthwatering fruit to the girls.  When they started enjoying it, he will pluck it from their hands.  Then, as they pleaded for the fruit to be returned, he will bite into it and give it back.

If the Gopiis braided their hair beautifully, Krishna would sneak behind them and pull it so hard such that their hair comes out; it is painful too.  He would bring lovely flowers and make the girl cry for them.  Then he will ask her to close her eyes so he could place the flowers in her hair, then while she was blind, he gave it to her friend!  Any Gopii wearing a nice new dress would be sure to get mud on it that day.

Were these really pranks or did they have some inner meaning hidden in them?  You have to decode these pranks, discarding the face value, going deeper to understand the ultimate meaning — letting go of ego, possessiveness, greed and external beauty; building up kindness, inner beauty and a feeling of oneness. 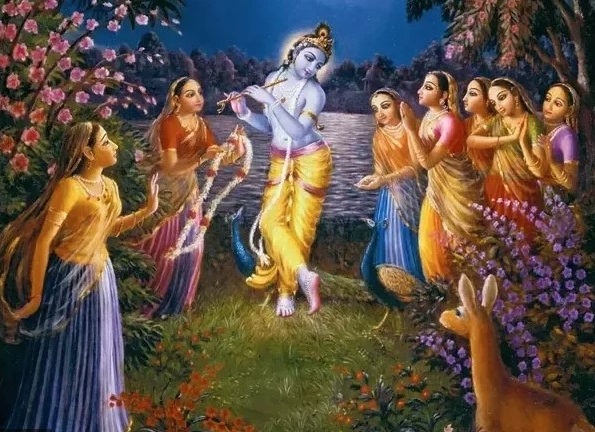 The Gopiis loved and adored Krishna so much.  They presumed Krishna as their ultimate supreme love.  Oh, and his flute, it totally intoxicated them.  His flute music was so mesmerizing, all the Gopiis just lost themselves in the melody.  They enjoyed Krishna’s flute very much and devoted their life to being with him all the time, as much as they can.  The days that they could not see him became the dark days of their lives.  They lived for Krishna, only for Krishna.

It was the same for the cows and the calves too.  The cows would get distracted from feeding their calves, the minute they heard Krishna’s flute.  They would abandon their calves and go searching for Krishna.  The calves too would forget about everything and go in search of Krishna. 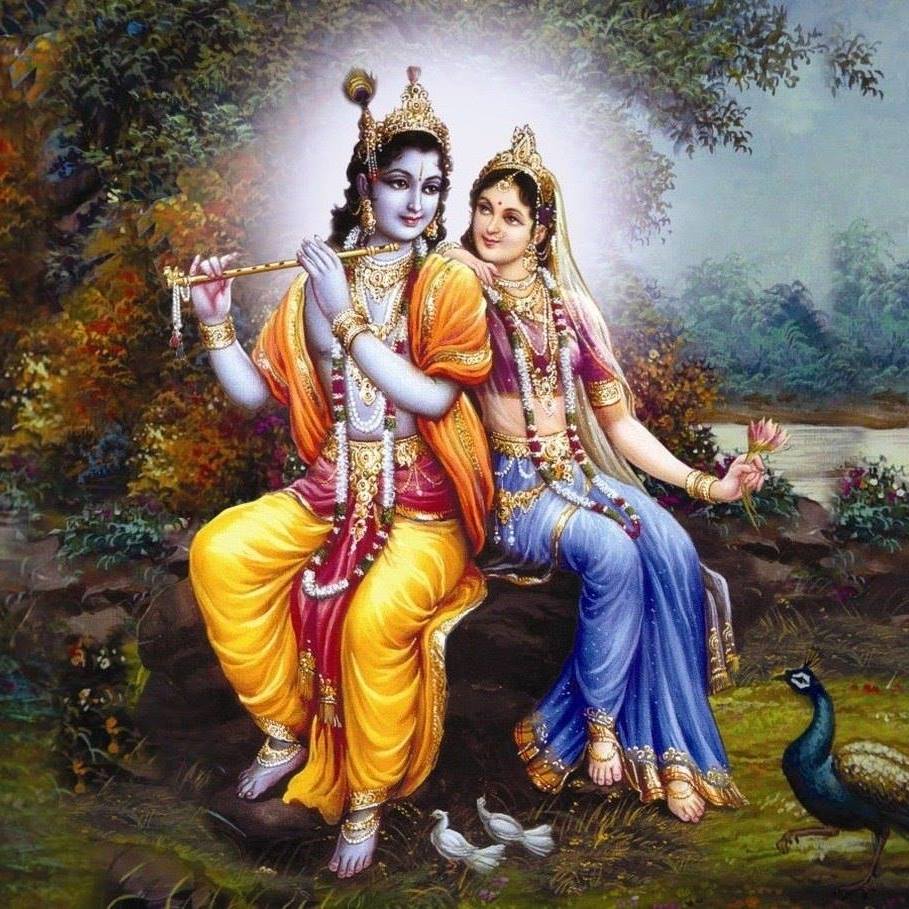 Krishna’s relationship with the Gopiis, Radha in particular, constitutes the private life of Krishna.  In this relationship, love reigns supreme.  Krishna bows to Radha.  The supreme object of devotion worships the highest devotion.  The peak of Radha and Krishna’s love affair was the Rasa Leela, the circular dance of love.  This dance, Rasa Leela, points to the highest potential of the Self.  Here, the highest love conquers the selfishness.

The young Gopiis came to Krishna in the middle of the night.  His flute was the invitation for that wonderful experience of transcendent love.  Willing to leave all else behind, they never hesitated for a moment to think about the consequences of meeting with a young boy in the forest at night.  Of course, thousands of reasons would have filled their minds as to why they should not go.  Leaving their families, while not worrying about the cultural and religious barriers, the Gopiis proved their true devotion in meeting with Krishna in the dark hours of the night.

After Gopiis stole away from their families, Radha would steal Krishna away from the other Gopiis.  Krishna, who steals away others hearts would have his own heart stolen by Radha. 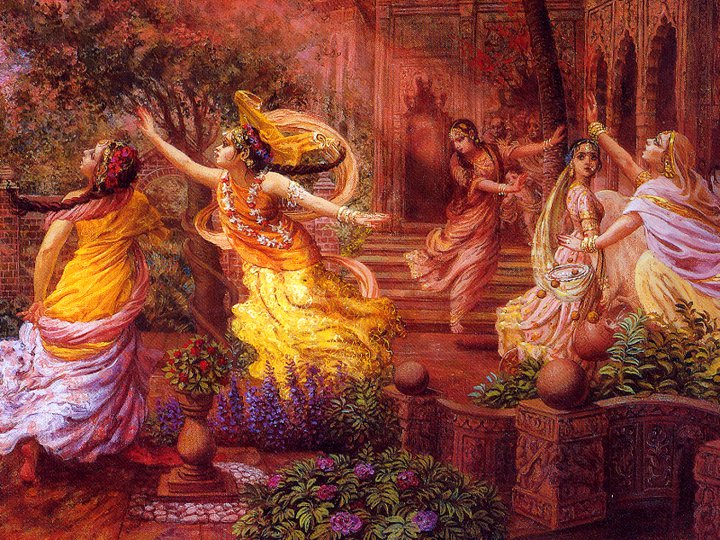 One particular night while Krishna was playing his flute, enchanted by the melody, Gopiis started dancing around him in the moonlight.  After some time, Krishna noticed that the Gopiis had become proud of their good fortune of being with him.  To teach them a lesson, he disappeared.  As soon as he disappeared, the Gopiis hearts were filled with longing.  In great despair, they went searching for Krishna in every corner of the forest, acting like they had lost their minds.  Once they realized their mistake, he suddenly reappeared.

In this way, Krishna gave them the teaching about selfless love, then started to dance to reward them for their pure love and devotion.  With only one Krishna and way too many Gopiis, Krishna had to multiply himself to dance with each one of them — to their great delight.  They danced all through the night, the divine dance of bliss, in a big circle until sunrise.

One afternoon while they were grazing, the cowherds (Gopalas) got really hungry.  They asked Krishna and Balarama to find them something to eat.  Krishna told them about some brahmins doing a special yaj~na (Vedic fire ceremony) in a nearby village, prompting them to go there and ask for cooked food.  He said to ask in his name and in the name of Balarama.

Following instructions, the Gopalas found the priests chanting mantras and making offerings to the fire.  The Gopalas asked for food, reminding the brahmins about the principles of charity.  They also mentioned that any food that they would get was to be shared with Krishna and Balarama.  The Brahmins ignored the boys, too busy concentrating on finishing the yaj~na, anticipating the benefits coming from it.  The Gopalas went back empty-handed and described what happened with a huge disappointment.  Krishna sent them back to the village, not to the priests but to their wives. 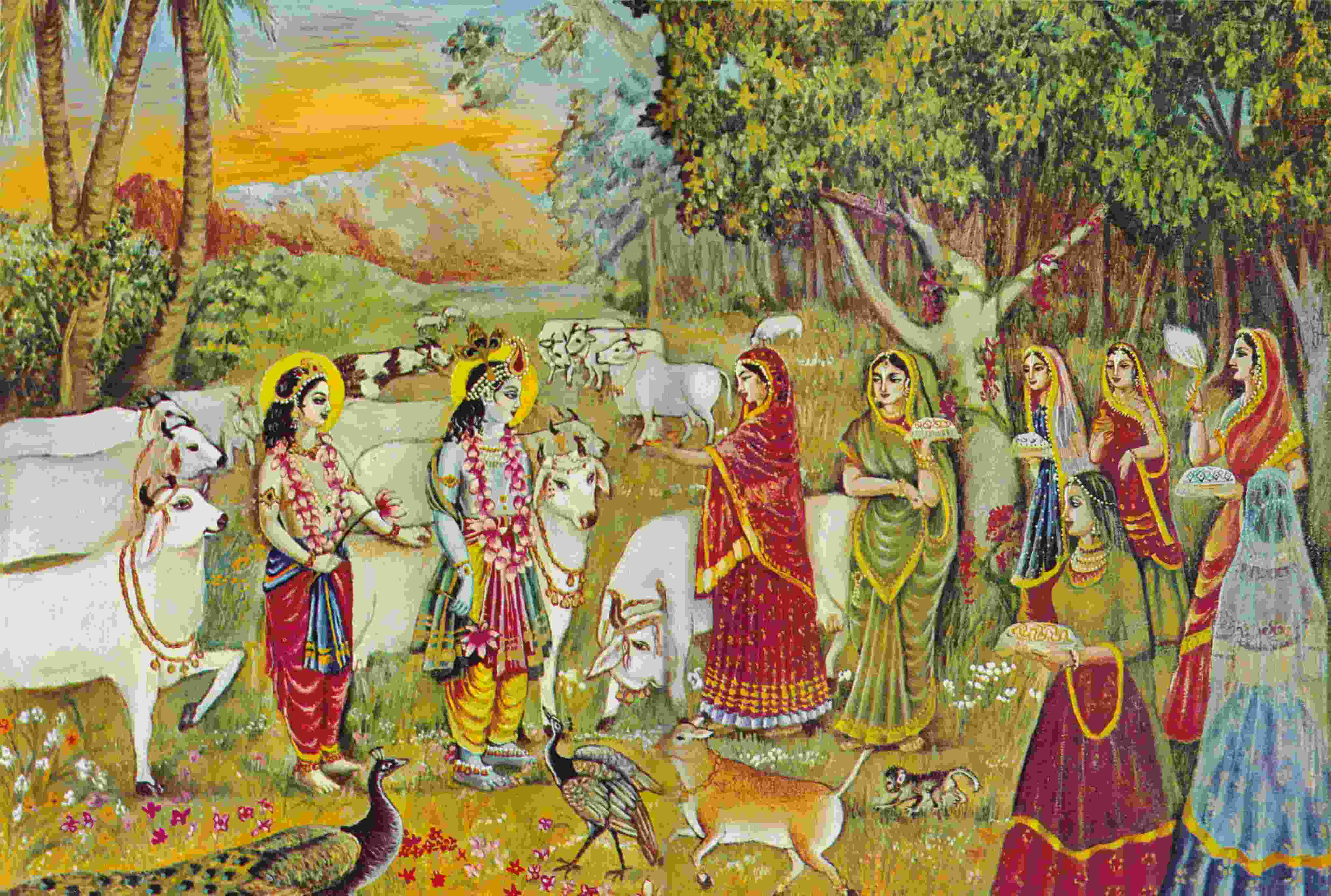 The minute that the Gopalas mentioned Krishna was sending them, asking for food, the wives were thrilled that Krishna was somewhere in their neighborhood.  They prepared a big platter of food, enough for a feast.  They were all ready to go with Gopalas to see Krishna.  As they were about to leave their homes, their rest of their family showed up and wouldn’t let them go to see Krishna.  But the women simply ignored them, leaving with the Gopalas to see their dear Krishna.  When they saw Krishna their hearts melted with delight.

Krishna was pleased with how their devotion and dedication had overcome all obstacles, so they could come to see him and serve him selflessly.  Yet Krishna sent them back to their families, advising them to help complete the yaj~na successfully.  As the ladies were hesitant to leave, wanting to serve Krishna and fearing that their families wouldn’t accept them since they left against their wishes, Krishna promised them that their families will welcome them.  He explained that they can have him in their mind while they do their household duties.  He said, in this way they can attain him.

Receiving this blessing, the women returned back to their homes.  To their surprise the whole family was pleased to have them back.  The brahmins realized how they had been so caught up in the rituals that they forgot what was most important by ignoring Krishna’s request.  The brahmins regretted that they missed the golden opportunity to see and serve Krishna.  Their life changed forever from that instance of realization.

An annual tradition in Vrindavan was to make offerings to Indra, the lord of the heavens, so that he blesses them with enough rain for the year.  Indra had gotten used to this and started to expect it from the earthlings.  Without doing his duty of providing for their needs, he was filled with arrogance, expecting his annual offerings.  Krishna was aware of this and told the Vrindavan citizens that Indra’s duty was to give everyone the rain; thus they should make their offerings to Govardhana Hill, nearby Vrindavan.  He explained that Vrindavan flourished because of its location at the base of Govardhana Hill, so that Govardhana Hill provides all the essentials they needed.  Having hearing this, the people felt that Krishna was correct and decided to make the offerings to Govardhana Hill that year.

All the preparations were completed and they started the offerings to Govardhana Hill.  Indra realized he was not getting the Vrindavan offerings and got angry.  He ordered his servants to show his power by starting a huge storm, complete with thunder and lightning.  The people were terrified, saying Indra was taking revenge on them.  They started questioning their decision to change the offerings. 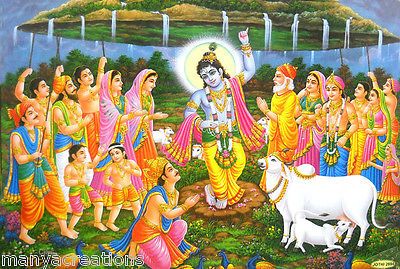 Krishna calmed them, assuring that Govardhana Hill would protect them.  He uprooted Govardhana Hill and held it aloft, as a huge umbrella above his head, using only his pinky finger.  Indra’s servants continued the violent weather for six days, but nothing affected the Vrindavan residents, as Krishna and the Govardhana Hill were protecting them.

Indra’s servants went back and reported their failure to Indra.  Not believing his own servants, Indra himself went to Vrindavan, planning to extend the storm and prove his might.  He increases the intensity of the storm, not knowing the true planner behind the uprising.  Yet he was unable to do any harm to Govardhana Hill and the people it was protecting.

Realizing it was Lord Vishnu in the form of Krishna behind all the drama, Indra understood his mistake and calmed the storm.  As the storm subsided, all of Vrindavan was happy and completed their offering to Govardhana Hill, thanking Krishna for showing them the correct path and safeguarding them.

After everyone left, Krishna laid the hill back in its place and came out to find Indra waiting to beg for forgiveness from him.  As gracious as always, Krishna forgave Indra but warned him not to repeat the mistake.