Krishna and Rukmini were happily living in Dwaraka.  Rukmini gave birth to a healthy baby boy, who was named Pradyumna.  People of Dwaraka rejoiced.  Pradyumna, the eldest son of Krishna, is none other than Kamadeva, the God of Love.  Kamadeva was reborn as Pradyumna due to a curse by Lord Shiva.  We will come back to this story about Pradyumna in a later chapter.  For now, let’s continue with Krishna and the precious Syamantaka Jewel.

There once lived a king named Satrajit.  He was a great friend and devotee of Surya Deva, the Sun God.  Once Lord Surya gave Satrajit the precious Syamantaka Jewel as a gift due to Satrajit’s adoration towards him.  Satrajit was in absolute delight. 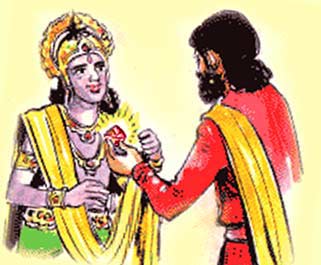 This particular gem is said to have great power.  Whichever land this jewel resided in would never encounter any misfortunes such as droughts, floods, earthquakes, untimely deaths or scarcities.  It would always be full of prosperity.  It also would give the bearer of the gem the dazzling appearance of the Sun God.

Satrajit, who belongs to the Yadava clan, coming from the same family as Akrura, returned to Dwaraka with the Syamantaka Jewel.  People mistook him for the Sun God as the dazzling gem was shining its light on Satrajit.  Such news didn’t take much time to reach the palace.  When Krishna heard about this glorious gem he asked Satrajit to present the jewel to Ugrasena, the mighty king of the Yadavas.  But the greed-stricken Satrajit did not comply with this request.  He refused to give the jewel to the King.

One day, Satrajit’s brother, Prasena, who was also the ruler of a Yadava province, wore the Syamantaka Jewel of his brother while hunting in the forest.  While wearing it, he was attacked by a lion, which killed him and fled with the jewel to a nearby mountain range.  Soon after a bear attacked the lion and, after a fierce fight, killed the lion.  The bear took off with the jewel.

The bear was none other than Jambavan, the King of the Bears who was loyal to Rama of Ayodhya during the Ramayana period of Treta Yuga.  He was also considered one of the seven immortals or Chiranjeevis.  Jambavan gave the jewel to his child as a play toy.

When Prasena went missing with the jewel, Satrajit suspected that Krishna was the cause of his brother’s mysterious disappearance.  He therefore accused Krishna of killing his brother, based on the fact that Krishna had requested the jewel be presented to King Ugrasena.  The rumor was that Krishna had an eye on the Syamantaka Jewel, so Prasena’s disappearance with the jewel became the talk of the town.  The people began to doubt and accuse Krishna of murder and theft. 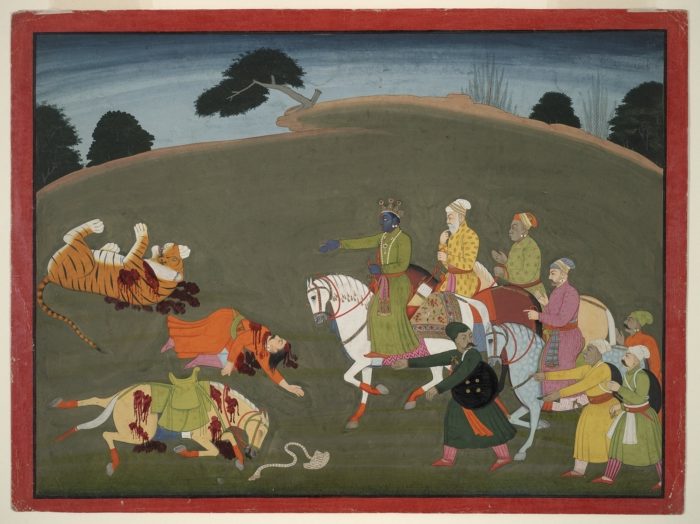 In order to prove his innocence, Krishna decided to find out the true cause of Prasena’s disappearance and straighten out the story.  Along with a few people from Dwaraka, he followed on the trail of the deceased Prasena.  They arrived at the spot where Prasena was killed, finding the corpses of Prasena and his horse still lying there.  They saw the evidence that a lion had attacked and killed Prasena and his horse.

From there Krishna, accompanied by the people of Dwaraka, followed the footsteps of the lion, which led him to the spot of the second incident, where he found the corpse of the lion.  The marks on the corpse led him to believe a mighty bear had killed the lion.

So from there, he followed the tracks of the bear, which finally led him and his clan to the entrance of Jambavan’s cave.  At the entrance of the cave, Jambavan’s little child was playing with the priceless jewel.  The maid who was looking after the child screamed at the site of Krishna and his clan, alerting Jambavan.  She took the little child and ran into the cave. 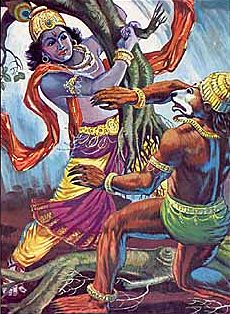 Krishna, asking the people to stay outside, followed them into the cave.  Jambavan, hearing the maid’s cry,  immediately came to the rescue, finding Krishna following his child and the maid.  Not knowing who Krishna was or the reason why he was there, Jambavan engaged in a furious and prolonged fight with Krishna for 28 days.  Jambavan gradually grew tired and wondered who could have the sustained power to weaken him.  Being an immortal and having the strongest body, he couldn’t understand who fought back with this enormous strength and valor.

It was then that Jambavan realized that he had been fighting none other than Shri Rama himself.  At the moment of that realization, he immediately stopped fighting and prayed to Krishna asking for forgiveness.  Krishna embraced Jambavan, full of love, and explained about his visit.  Jambavan placed the jewel at Krishna’s feet, offering it to him with devotion.  He also requested Krishna to accept his daughter Jambavati in marriage as an offering for his sins earned by fighting him.  Krishna accepted both Jambavati and Syamantaka Jewel.

The people were waiting outside the cave for Krishna to come out.  On the 12th day, fearing that something had happen to Krishna, they sent a messenger to Dwaraka.  They did not have the courage to enter the cave and continued to wait outside for some time.  But with little hope, they finally returned to Dwaraka, unable to bear the thought they had lost Krishna.  The messenger informed Vasudeva and Devaki about the danger that they anticipated.

Hearing this news Devaki immediately gathered all family and friends, arranged a puja for Goddess Durga and prayed to her with piety for Krishna’s safe return.  They heard a voice from the sky saying that Krishna will arrive soon.  They were delighted and satisfied, accepting that message as Divine Mother Durga’s pronouncement.  Vasudeva and Devaki were confident that Krishna would return. 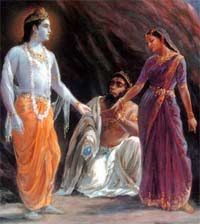 After the 28 days of battle, Krishna returned to Dwaraka with Jambavati, his new wife, and the precious Syamantaka Jewel.  All of Dwaraka rejoiced at his return.  He summoned Satrajit to his royal assembly and explained what happened.  Krishna then handed the jewel over to Satrajit, saying that he never was interested in the jewel in the first place.  The only reason he had wanted to find it was to prove his innocence.  He also warned Satrajit to keep the jewel safe.

Satrajit’s heart was saddened by this knowledge, feeling ashamed of doubting Krishna.  He accepted the jewel with great remorse.  He wanted to make things right and acted immediately with an opportunity to get out of his bad deed.  He gave his daughter Satyabhama in marriage to Krishna, and gave the Syamantaka Jewel as a token of love. 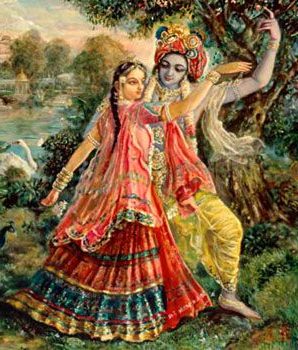 Satyabhama is an incarnation of Bhudevi, Goddess Earth.  Satyabhama was in great delight as she was greatly in love with Krishna and didn’t want to marry any of the other suitors her father was arranging for her.  Krishna accepted only Satyabhama and refused to accept the jewel.  He returned it to Satrajit, saying he could keep the jewel as long as he lived and let it come to Satyabhama as an inheritance afterwards.

Soon after all this, Krishna and Balarama heard that their cousins from the Kuru family were in great danger.  They rushed to Hastinapura to help.  While they were gone, Akrura and Kritavarma of the Yadava Family, who had their eyes on the dazzling jewel, went to see Satadhanva, a wicked king.  They wanted to use him to get the jewel from Satrajit for themselves.

Satadhanva was among those who had wanted to marry Satyabhama.  Satrajit had once promised Satadhanva to give his beautiful daughter in marriage to him.  Later Satrajit changed the decision, out of guilt and to win the favor of Krishna, and married his daughter to Krishna.  Satadhanva was very hurt and angry with this, as he was madly in love with Satyabhama, even though she hated him unequivocally.

Akrura and Kritavarma conspired with Satadhanva to make use of Krishna’s absence from Dwaraka as an opportunity to get the jewel from Satrajit.  They consoled Satadhanva and praised him, firing up his anger, boosting his ego and greed, all to push him into doing what they desired.  One night, Satadhanva entered the house of Satrajit, killed him in his sleep and took off with the jewel.

Satyabhama was devastated to hear the news about her father’s murder.  She rushed to Hastinapura to inform Krishna about the frightening, cruel killing of her father.  Satyabhama, unlike Krishna’s other wives, was well trained by her father in many skills, including warfare.  She had been a very independent woman with a mind of her own.  Krishna consoled Satyabhama and returned to Dwaraka right away with her and Balarama to do last rites and rituals for his father-in-law.  Then he left with his brother Balarama to avenge Satrajit’s death.

When Satadhanva heard about the Yadava brothers coming for him, he fled on his horse, seeking help from Akrura and Kritavarma.  They both refused to help him; they had never wanted to go against Krishna.  Satadhanva left the jewel with Akrura and ran away to save his life.  The horse he was riding collapsed on the outskirts of Mithila.  Terrified, he abandoned his horse and fled on foot.  He was chased down by Krishna and Balarama, finally killed by Krishna by his Sudarshana Chakra.  Balarama decided to stay in Mithila, as he was a good friend of the King of Mithila.

In the meantime Akrura’s absence from Dwaraka spread like wild fire.  People of Dwaraka were disturbed by the belief that there was going to be famine and drought due to Akrura’s absence from Dwaraka.  This was due to the fact that once, in the province of Kashi, there was severe drought.  At that time the King of Kashi, in accordance with advice from an astrologer, arranged the marriage of his daughter Gandini with Svaphalka, the father of Akrura.  Soon after their wedding, there was sufficient rainfall to bring Kashi back to its glory.  Due to this, people were under the impression that wherever Svaphalka or his son Akrura stayed, there would be no natural disasters.

To set things right, Krishna summoned Akrura from Kashi and asked him to show the Syamantaka Jewel in his possession to all.  When Akrura complied and showed the Syamantaka Jewel at the royal assembly, Krishna let him keep it, on the condition that it was to remain in the city of Dwaraka.  The people of Dwaraka were relieved to hear the truth and delighted about the jewel as well as Akrura’s return to Dwaraka.