Nagan was a tribal chief in the jungle area of Potthapi.  He and his wife Thaththai didn’t have children for a very long time and were praying to Lord Karttikeya (Shiva’s son).  They were blessed with a son whom they named Thinnan.

Thinnan grew up to be a reputed archer in his tribe; he often led his people on hunting expeditions.  On one such hunt, Thinnan was separated from his friends chasing a wild boar and found himself in an unknown part of the jungle.  Trying to find his way out, he came across a shrine dedicated to Lord Shiva. 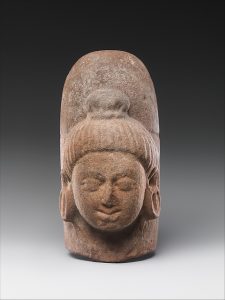 The shrine was a small one, consisting of just a Shiva Linga, but was clean and neat.  Thinnan found himself inexplicably attracted to the Linga.  He was filled with a desire to make an offering to the Deity.  Thinnan had no idea about the rituals to perform the proper ceremonies to the Lord.  He was so consumed with love that he decided to offer the meat he had with him.

This shrine, called Thirukalahasti, was a very ancient one, cared for by a brahman who lived in the nearest town, many miles away.  The poor brahman was an ardent devotee of Shiva, but could not make the long journey every day, so he came to the shrine once a fortnight, bringing the items of puja (worship) with him.  He cleaned and prayed to the Deity and made his offerings before returning home.

The brahman returned to the shrine the day after Thinnan had made his offerings, and was shocked to see meat lying next to the Linga.  He assumed that some animals must have left the meat there.  He cleaned it well with fresh water from a nearby stream before continuing with his routine.  The brahman left that day satisfied that he had done his duty.

The next day, Thinnan returned, bringing more meat.  He did not know any prayers or rituals, so he spent some time talking to the Lord and pouring out his heart.  This gave him so much pleasure & peace that he started coming every day, bringing with him the catch of the day.

One day as he walked towards the shrine he saw some beautiful flowers. He plucked some for his Lord and saved them in his hair, as he was carrying the day’s catch in both arms.  Then he noticed a small stream flowing nearby and had an idea, “How nice it would be to give a bath to the Lord!”  He then bent and filled water into his mouth and went to the shrine where he spit the water from his mouth on the Linga, thus bathing the Lord.  He happily made his offerings and spoke to the Lord before leaving for the day.

The next time the brahman returned to the shrine, the sight he saw repulsed him.  There was meat all over the place again, and this time, the Shiva Linga was covered by spittle.  “This was not the work of an animal, but a human being! How could anyone thus defile the Lord?”  He patiently cleaned up the shrine before chanting the mantras, purifying the Linga and making his offerings.  Again, he left, having done his duty, hoping & praying that such disrespect would not occur again.

But he saw the same thing every time he arrived there.  Heartbroken by the situation, he could not control his tears and addressed Shiva aloud, “O Lord, you are the purest of all, the greatest of all Gods.  How can you allow such indignities to happen to you yourself? You are the protector of the universe.  Please protect yourself from such acts.”

Lord Shiva was moved by the brahman’s plea and spoke out to his devotee, “My dear devotee, what you consider indignities is the offering made to me by another devotee.  He knows nothing of rituals and practices but, like you, he loves me with all his heart.  I am bound by his devotion, and have to accept all that he offers me.  If you wish to see the extent of his love for me, hide somewhere and see what happens.  It is time for him to come.”

The brahman was curious about this devotee whom the Lord himself praised.  The brahman hid himself behind some bushes.  Thinnan came very soon, as usual carrying meat in his hands, flowers in his hair and water in his mouth.

As usual Thinnan started his routine of bathing the Shiva Linga & offering what he brought to the Lord.  Suddenly, he noticed that there was something oozing from the Lord’s left eye.  Horrified, he ran and collected herbs and applied them to the eye, hoping to cure the problem.  It only made it worse, for blood started oozing.  He tried out a few more remedies, none of which worked.

Finally, he decided that the only way he could solve the problem was by offering the Lord his own eye.  Taking one of his knives, he cut his left eye out of its socket, and placed it on the Linga.  At once, the blood stopped oozing, and Thinnan heaved a sigh of relief.  He started dancing around with joy. 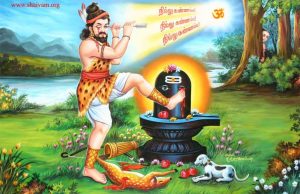 Suddenly, he was shocked to notice that the Lord’s right eye was now bleeding in the same way.  He now knew the solution and decided to offer his other eye too.  But once he had taken his right eye out, how would he see where to place it? He pondered for a minute and came up with a solution.  Lifting one of his feet, he placed it on the place where the Lord had his right eye.  With his knife, proceeded to take out his right eye from its socket.

Shiva could not bear to see this great sacrifice by his devotee and appeared in front of him.  At once, Thinnan regained his sight and prostrated fully before the Lord.  The brahman too came out from hiding and bowed before the Lord.

Lord Shiva blessed both of them and praised them for their devotion, given in their own way.  He especially lauded Thinnan, and declared him to be a saint – a Nayanar, as the greatest of Shiva’s devotees were known.  Since he had given up his eyes (“kann” means “eye” in Tamil) for the Lord, he would henceforth be known as Kannappa Nayanar.