Pregnant with twins, Diti was the wife of the sage Kashyapa.  The twins were incarnations of Jaya and Vijaya, whom we met in a recent blog on Varaha, Vishnu’s incarnation as a boar.  As the gatekeepers in Vaikuntha, Jaya and Vijaya had been cursed to live human lives in which they would hate Vishnu.

Diti foresaw that her children were going to hate God, so she carried them in her womb for a hundred years.  Then she found that her grandson would be a divine soul.  Knowing this, she gave birth, naming the boys Hiranyaksha and Hiranyakashipu.

Hiranyaksha was killed by Vishnu as Varaha, the boar.  Hiranyakashipu was outraged at the death of his brother; so he started harassing all devotees of Lord Vishnu, thinking it to be the best way to get revenge.  He wanted the revenge so badly that he practiced severe austerities, appealing to Lord Brahma for a boon that Lord Vishnu will not be able to kill him. 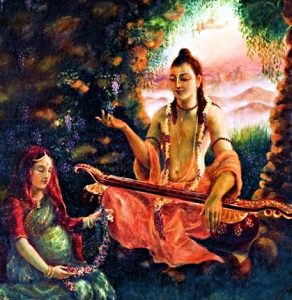 Sage Narada knew Leelavati was sinless, so he advised Indra against taking another person’s wife.  Sage Narada took Leelavati into his care, saving her from Indra.  While in Narada’s care, the fetus in her womb was affected by the transcendental teachings of the sage.  Hearing the praise of Lord Vishnu, by the name of “Narayana,” a Divine mantra imprinted in the child at such an early age — “Om Namo Narayanaya.”

When the beautiful boy was born, Hiranyakashipu’s son, he was named Prahlad.  Prahlad grew to become a devotee of Lord Vishnu, all due to sage Narada’s prenatal training.

Hiranyakashipu requested immortality, which was refused by Lord Brahma, as it was something no one can grant.  Then Hiranyakashipu, learning from his brother’s mistake, requested a cunning boon:  that no human, animal nor God should be able to kill him, with or without a weapon.  He added that he should die, neither indoors nor outdoors, neither during the day nor during the night, neither on the ground nor in the sky.  Unable to refuse, Lord Brahma gave the boon exactly as asked.

Hiranyakashipu returned to his kingdom with this huge power.  He especially continuied to harass anyone devoted to Lord Vishnu.  His successes made Hiranyakashipu more egoistic, proud, self-centered and conceited.  After chasing Indra and the Devas out, he established his kingdom in the heavens and made himself the Lord of the three worlds, forcing people to worship him as God.

Since Lord Vishnu’s devotees recite the mantra, “Om Namo Narayanaya,” all the time, Hiranyakashipu banned it.  Instead he ordered them to say his praise, “Om Namo Hiranyaya.”   Anyone disobeying the order was executed.

The Devas, along with the devotees, prayed to Lord Vishnu for him to incarnate and rescue them.  They heard a divine voice, promising that Lord Vishnu will put an end to their suffering and slay Hiranyakashipu, but only when Hiranyakashipu tries to persecute his son Prahlad.  Hearing this the Devas & all beings of the three words felt peace in their hearts. 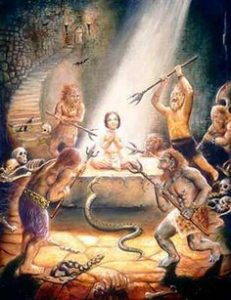 From Narada’s Ashram, Hiranyakashipu brought his wife & son back to his own kingdom.  He sent Prahlad to Sukracharya, the Guru of the demons.  The teachers taught Prahlad all the knowledge and, most of all, the praise of Hiranyakashipu, accepting him as God and chanting the mantra, “Om Namo Hiranyaya!”  As Prahlad’s mind & heart was already filled with the mantra “Om Namo Narayanaya,” no other praise was able to get into it.

This made Sukracharya and the teachers very worried, so they took him to Hiranyakashipu, saying they taught him everything except his praise, “Om Namo Hiranyaya!”  Hearing this, Hiranyakashipu was enraged that, of all people, his own son was not accepting him as God.

Controlling himself to his best, Hiranyakashipu asked Prahlad, “What will give someone everlasting happiness?” Prahlad answered, “Dear Father, whoever renounces the world and its attachments, understanding that it’s all Maayaa’s doing, and surrenders at Lord Vishnu’s feet, will be in eternal bliss.”  Prahlad gave full respect to his father but refused to praise his father as God.

Hiranyakashipu glared at the teachers and ordered them to take his son back to the Guru’s Ashram, and to guard him closely so that the devotees of Lord Vishnu will not influence him.  He warned them not let Prahlad out of their sight and to teach Prahlad his father’s mantra.

The teachers asked Prahlad about who had given him teachings about Lord Vishnu.  Prahlad answered, “Whom but Vishnu himself gave the knowledge.”  The teachers tried punishing Prahlad, to make him accept Hiranyakashipu as almighty, but Prahlad simply refused.  Time passed, and the teachers gave up, so they taught him the four goals of life. 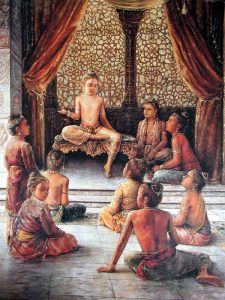 The other students were attracted by Prahlad’s divine nature and started following him.  This made the Guru’s situation even worse.  Unable to handle the situation, the teachers took Prahlad back to his father.

Prahlad gave his pranams (bows) to his father.  Hiranyakashipu took Prahlad onto his lap with affection, patting his head.  He asked, “What have you learnt from your Guru all these years?”  Prahlad answered, “Dear Father, I learned that the most worthwhile occupation for anyone is the worship of Lord Vishnu.”

Hiranyakashipu looked at Guru Sukracharya with anger, but the Guru immediately clarified that this was never taught by anyone at the Ashram.  In fact, he said that they were afraid that Prahlad’s behavior was influencing the other students.  Hiranyakashipu furiously asked Prahlad who taught him all this nonsense?  Prahlad answered humbly, “Vishnu himself reveals these teachings to those who are devoted to him.”

Blinded by anger, Hiranyakashipu threw Prahlad from his lap onto the floor and ordered his guards to kill Prahlad.  However, Prahlad just sat silently and meditated on Lord Vishnu, so none of the weapons had any effect on him. 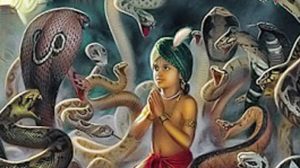 His guards then threw Prahlad beneath an elephant’s feet.  They cast him into the midst of huge fearful snakes.  They hurled him from a hilltop.  They gave him poison.
They starved him.  They exposed him to severe cold, winds, fire and water.  They threw heavy stones to crush him.  But throughout these trials, Prahlad was simply absorbed in thoughts of Lord Vishnu and thus remained unharmed.  Unable to kill Prahlad, the guards brought him back to Hiranyakashipu.

Hiranyakashipu became furious and didn’t know what to do next.  He asked Prahlad, “The Lord you worship, Vishnu, where is he?  Can you show me where he is so that I can kill him and prove to you that I am the most powerful person in the three worlds?”  Prahlad answered, “He is everywhere!”

Hiranyakashipu’s temper was out of control, “Tell me one place where he is.  Is he in this pillar in front of you?  If I don’t find him, I will kill you with my own hands.”  Praying to Lord Vishnu, Prahlad replied without any hesitation, “Yes!”  Hiranyakashipu took up his sword, got up from his royal throne and, with great anger, struck his fist against the pillar.

His blow broke the pillar into thousands of pieces, and out came a ferocious half-man, half-lion creature, never seen before.  This creature had angry eyes like molten gold, a shining mane on the fearful lion-like face, deadly teeth and razor-sharp claws. 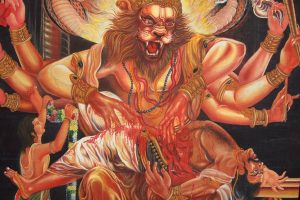 Hiranyakashipu used all sorts of weapons, with no effect on the creature in any way.  At twilight (neither day nor night, according to the boon he received), with one blow, the creature brought Hiranyakashipu down.  Then the creature picked up Hiranyakashipu and took him to the entrance of the palace (neither inside nor outside), placed him on his thighs (neither on the ground nor in the sky) and began to rip Hiranyakashipu’s torso with its claw-like nails (with and without a weapon).  Hiranyakashipu perished, by which Vijaya completed his first birth on earth.

All the Devas and the sages at the palace prayed to Lord Brahma to protect them.  Lord Brahma appeared, saying, “This is Narasimha.  Lord Vishnu himself has taken this form to save the little boy Prahlad, his devotee.”  Nara means man, simha means lion.

They asked Lord Brahma to calm Lord Vishnu down, but Brahma said only Prahlad could do so, as he was the one for whom Lord Vishnu had taken the fearful Narasimha avatar.  He told Prahlad to go to Narasimha.

Without any hesitation, knowing it is the ever-loving Lord Vishnu in this terrifying form, Prahlad went closer to Narasimha and fell at his feet.  Lord Vishnu calmed down instantly and showed his blissful form, blessing Prahlad with a hand on his head.  Like a bolt of lightning, Prahlad was given the ultimate knowledge and started singing the praise of Lord Vishnu.

Lord Vishnu asked Prahlad to name any boon, so he asked to purify his father’s sins and bless everyone in the three worlds.  Prahlad then participated in the rituals to liberate his father’s soul and became the king of Asuras (Demons).  With the blessings of his Guru Sukracharya and the other celestials, Prahlad ruled the Asura realm gracefully for a very long time.

To your inherent Divinity, again and again I bow.