Indra, the King of Heaven was riding on His white elephant.  As He returned to Heaven, He was greeted by Durvasa, a great sage, who offered him a very special garland of flowers vibrating with the energy and presence of the Divine Goddess Parashakti herself. 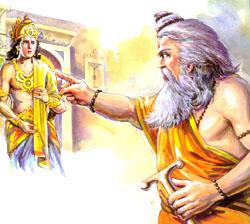 Indra, being a king, was arrogant, so while He accepted the garland, He gave it to the elephant.  The elephant was irritated by the smell of the garland, threw it to the ground and trampled it.  Durvasa, known to be a hot-headed sage, was predictably enraged, as the garland held all beauty and auspiciousness in it.  It was to be treated as sacred prasad, a Divine Gift.  Sage Durvasa cursed Indra, “Your pride has made you egoistic about your position and wealth.  Goddess Lakshmi will now forsake you.”  Because of the sage’s curse, without Goddess Lakshmi’s blessings, Indra and all the gods lost their strength, energy and wealth.

With all His powers diminished, Indra with the other Devas ran to Lord Vishnu seeking His advice.  Lord Vishnu said the only way to get back what was lost was to churn the ocean, then made of milk, to bring forth “amrit” (the nectar of immortality).  Thus Indra and the Devas could drink the amrit, which would make them immortal again and help them regain their lost powers.  Because of their depleted powers, Vishnu explained they would need help from their half-brothers the Asuras (demons), even though they had always been in conflict with them, in order to achieve this. 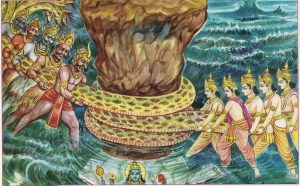 Indra led the Devas in approaching the Asuras for help.  After deliberations, they all agreed to churn the ocean together and share the proceeds.  The churning of the ocean of milk was not going to be an easy task, though they were working together.  They needed a huge churning rod and a very strong rope.

They sought the help of Mount Mandara to be their churning rod and the great snake Vasuki, the snake god, to be their rope, which they wrapped 3½ times around the mountain.  The churning of the ocean began with the Devas holding Vasuki’s tail (as advised by Lord Vishnu) and the Asuras holding the head.  The Devas and Asuras pulled back and forth alternately, rotating the mountain and churning the ocean.

As they were churning, Mount Mandara started sinking in the ocean of milk.  To prevent this, Lord Vishnu assumed the form of a tortoise and held Mount Mandara up from underneath.  This is known to be “Kurma Avatar” (kurma=tortoise, avatar=incarnation), one of Lord Vishnu’s ten Avatars.

The first thing to manifest from the churning ocean was a deadly poison, known as “hala hala,” which threatened the very existence of all the worlds.  As instructed by Lord Vishnu, the Devas and Asuras prayed to Lord Shiva, who is healer of sickness and remover of all poisons.  Lord Shiva came to their aid, while the Devas and Asuras watched in amazement, by swallowing the hala hala poison in one gulp. 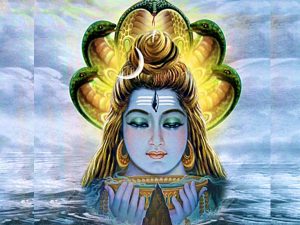 Goddess Parvati, standing by His side, was terrified at the thought that it might poison Shiva, so She squeezed His neck to prevent the poison from going into His stomach.  The poison remained stuck forever in His throat, staining it a dark blue.  This gave Lord Shiva the name “Neelakantha,” which means Blue Throated (neela=blue, kantha=throat).

Not knowing what would happen to Shiva, they all stood vigil with Him through the night.  This was the first Shivaratri or Night of Shiva, which is still celebrated on the dark of the moon in February or early March.

Once the danger had passed, the Devas and Asuras began churning the ocean again.  As they continued to churn, several objects came out:

Sura or Varuni — the goddess of wine

And Lakshmi — the goddess of wealth

The Devas and Asuras divided the objects among themselves.  Lakshmi was gifted to Vishnu who had been supporting them all along as the tortoise.

Finally, Dhanvantari (the Divine Physician) appeared with the vessel of amrit in His skillful hands. 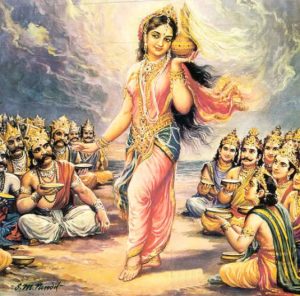 The Asuras overpowered the Devas in order to drink it all themselves.  Looking at the situation, Lord Vishnu turned into the loveliest of the nymphs of the Heaven, called Mohini.  Mohini distracted the Asuras, then stole the amrit and gave it to the Devas.

As Mohini was distributing the amrit to the Devas, one of the Asuras, called Svarbhanu, sneaked in to sit among the Devas and get some amrit.  The moment Chandra (Moon) and Surya (Sun), who were sitting beside him, saw that he was an Asura, they informed Mohini.  Lord Vishnu took on His real form and threw out the Sudarshan Chakra (a spinning disc-like energetic weapon).  The Asura’s neck was separated from his body, but he did not die as he had drunk one drop of the amrit.  His head was called “Rahu” and his torso “Ketu.”  Now, Rahu and Ketu periodically swallow the moon and sun to have their revenge, causing the eclipses to happen.  Rahu and Ketu are part of the nine planets of Vedic astrology.

After Indra and the Devas drank the amrit, they regained their strength.  The three worlds became filled with radiance and power.