The asuras (demons) and their descendants were taking over the earth, harming the good, righteous, virtuous people and influencing others to harmful deeds.  The earth was not in a good state: the people were in turmoil all the time, fighting with each other, using devastating weapons that harmed Bhudevi (Mother Earth).  She couldn’t bear the devastations so She sought help from Lord Brahma.

She went to Brahmaloka and stood in front of Lord Brahma with flowing tears and deep sorrow.  Lord Brahma was deeply touched and decided to escalate the issue to Lord Vishnu, who is the savior of the three worlds.  Together with Bhudevi and all the devas (Gods), Brahma went to Vaikuntha seeking help from Lord Vishnu.

While the others were praying and singing to Lord Vishnu, Lord Brahma was meditating.  He received a message through his heart and shared it with all.  The message from Lord Vishnu was that He would be born into Yadu Kula (the Yadava clan), to save the world from the evil which prevailed on Earth.  He also commanded the devas to be born into Yadu Kula,  Also, Adishesha (the five-headed snake, the part of Lord Vishnu serving him as his bed) will join him as his elder brother.  And his Shakti Maya, Lakshmi, will also have a role in this incarnation.  After revealing this information to the devas and Bhudevi, thus calming them down, Lord Brahma returned to Brahmaloka. 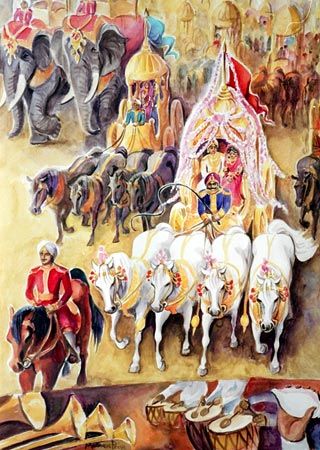 Here on earth at that time, king Ugrasena ruled Mathura, one of the leading cities.  Belonging to the Bhoja Vamsa (family), he had a son and two daughters.  Though Ugrasena was a very kind-hearted king, his son Kamsa was a cruel ill-natured prince.  Yet Kamsa’s sister Devaki devoted her life to the worship of Lord Vishnu.  When she came of age, her father arranged her to marry Vasudeva, a Yadu Kula prince, son of King Surasena.  [Please note that the name Vasudeva differs from Vaasudeva, a name for Lord Vishnu, often used to address Krishna.]

It was a splendid wedding, the two kulas coming together as one.  On the day when the newlyweds departed from Mathura to go Vasudeva’s kingdom, Kamsa himself offered to drive the chariot, as it’s the tradition for the brothers to go with the sister to her new home.  Many golden chariots were following the hundreds of elephants, horses, maids, etc.  While this wonderful procession was going on, all of a sudden, a thundering voice from the sky startled everyone.  It said, “Kamsa, you fool!  You are innocently serving them your sister, yet her eighth son is going to be the cause of your death.  He will kill you.”

Being cruel by nature, Kamsa immediately drew his sword to kill Devaki.  Vasudeva, shocked by this action, jumped in front to protect Devaki.  Being a wise person, Vasudeva decided to handle this situation with intellect.  He told Kamsa, “Devaki is not the threat.  Killing your newlywed sister is going to bring you a lot of karmic repercussions.  All you want are her children, so I promise you that I would deliver them to you when they are born.”

Though he was already mourning his unborn children, even hoping it wouldn’t happen, Vasudeva said this to save his wife from the heartless Kamsa.  Kamsa was somehow convinced by Vasudeva’s words and let them go.  Vasudeva quietly went home with his wife, having succeeded in putting off the danger. 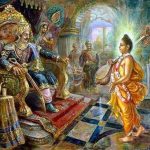 Maharishi Narada was watching all this drama, not too happy about the postponing of Lord Vishnu’s avatar, so he decided to visit Kamsa in order to provoke him into action sooner.  As everyone knows, Narada makes a lot of trouble, but always for the greater good of the world.  All the mischief and trouble he causes, at the end always brings happiness to the world.

Narada planted seeds of fear in Kamsa, saying he’d made a bad decision that in letting Vasudeva and Devaki go, trusting them to deliver their children.  He also revealed Lord Brahma’s plan, including about the devas being born into Yadu families, and anxiously awaiting and preparing themselves to protect Devaki’s eighth child, who will be an incarnation of Lord Vishnu.  Upon receiving this news, Kamsa wanted to imprison Vasudeva and Devaki.  His father, Ugrasena, objected, so Kamsa overpowered him, imprisoning him and taking over the kingdom.

Kamsa pronounced himself as the king of Yadu, Bhoja and Anthaka clans.  Then he imprisoned Vasudeva and Devaki in the dungeon.  Thereafter Kamsa’s tyranny threatened all, even including the sages.  Especially he targeted the Yadu Clan people, harming them and making them flee into other cities and villages, living in exile, disguised, hiding from the tyrant. 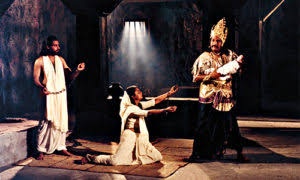 Devaki gave birth to her first child.  The guards informed Kamsa who came to the dungeon.  Even though he knew that only the eighth son is his enemy, Kamsa, being a oppressor, decided to kill all of Devaki’s children, afraid that they may be Lord Vishnu’s avatars.  As Devaki cried out for sympathy, Kamsa took the newborn baby by his feet and throws him towards a dungeon rock wall, killing the baby instantly.  Laughing arrogantly, Kamsa returned to his palace, above the dungeon.

There was nothing Vasudeva could do, but to console his wife and give her courage.  An year passed, the second child was born and Vasudeva and Devaki faced the same fate.  This cruel act of Kamsa continued with each child until the sixth.  The people spoke in hushed tones, afraid about this evil deed of their king.  Even the relatives and friends of Kamsa couldn’t stop him, so they ended up praising him, afraid for their own life and position.

It was time.  Lord Vishnu ordered Adishesha to be born as Devaki’s seventh child.  Devaki could tell that this child was different and was more scared for the safety of the child.  Yet she knew that, without help from Lord Vishnu, the fate of the child could not be changed. 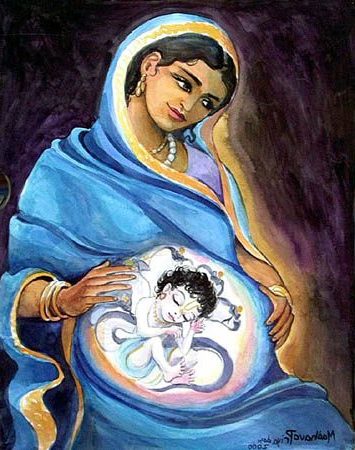 Lord Vishnu called upon Yoga Maya, the Shakti of the universe, asking her to transfer the embryo in Devaki’s womb to Rohini, another of Vasudeva’s wives, who was secretly living with her sister’s family in Vrindavan.  Revealing his plan to be born as Devaki’s eighth son, he also wanted Yoga Maya to be born at the same time, in Vrindavan, as the daughter of Queen Yashoda, the wife of Maharaj Nanda, head of cowherds.  Hearing this from Lord Vishnu, Yoga Maya executed the command by switching the unborn child from Devaki’s womb to Rohini’s.

Thus Devaki’s seventh child was presumed dead in her womb and Kamsa was blamed for harassing her into this state.  Kamsa didn’t care about the blame; he was happy that the seventh child was dead, not knowing what really transpired.  Devaki was in a lot of grief and worry, not only due to losing her seventh child, but also thinking of how she was going to save the eight child, so he could save the world from her tyrant brother.

In Vrindavan, Rohini gave birth to a son, an incarnation of the powerful Adhishesha, all by the grace of Yoga Maya.  Gargamuni, their family priest, secretly performed the rituals for the newborn baby, naming him “Rama,” and adding “Bala” to his name, predicting his extraordinary strength and valor.  Thus he was called Balarama.  Lord Vishnu’s eighth avatar had taken place, Adishesha being part of the Lord himself.  Balarama was growing up in Virindavan, expecting Lord Vishnu to arrive soon.