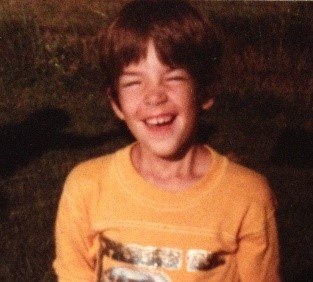 “You are Consciousness-Itself. You are the Source and Essence of the Universe, and Beyond.” Swami Nirmalananda

I first heard this teaching in 2001. After many years of searching for the spiritual path that would answer my questions, this teaching stopped my searching. Somewhere deep inside of myself I felt like I found it, the Truth. I couldn’t explain it at the time but I knew I found what I had been looking for. I’ve been on this path ever since.

From the time when I was around 8 years old I knew there was more to life than just mundane existence, but I didn’t know what that “more” was. I was raised to be Christian. I tried hard to connect with God in the way that I was taught but, when I asked some of the harder questions, people in my church or my Mom told me, “God just doesn’t want you to know certain things.” I was never satisfied with that answer. It never made sense to me that God was “out there” somewhere.

I spent over 20 years searching for the spiritual path that would fill the void in myself that I was feeling.  Then I discovered the teachings of Kashmir Shaivism that says that I am Consciousness, that Consciousness is my own Self. I read that Consciousness manifested as this whole universe including me.  God is not separate from me. God doesn’t live in the sky somewhere.

An analogy for this is the ocean waves. You see many waves in the ocean and each wave appears to be individual. But really, it’s all the ocean. When you look around and see all the different people, animals, trees, grass, the sky, the stars, and beyond — it’s all Consciousness.  The essence of all things is the same, there is no difference. The teachings of Kashmir Shaivism explain this in detail and promise that you can know this experientially, within yourself.

The teachings are not theory.  Following the teachings and practices, given by Masters who have found this Truth within themselves, will give you the experiential knowing that you are Consciousness. You are the source of the Universe.

Swami Nirmalananda describes it this way:

It was Baba Muktananda’s presence that made the theory real for me.  He was flesh and blood, alive, tangible, undeniable.  Being in His presence propelled me into my own Self, precisely because Baba was established in Self.  He also gave me teachings and practices to do, so I could get there on my own.  And He made me able to share this with you.

By chanting, meditating, studying, and especially being in relationship with a Guru you will come to know that you are so much more than you think you are. 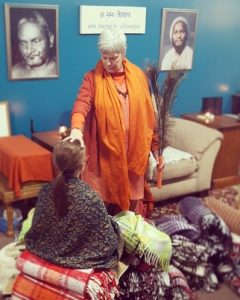 Swami Nirmalananda, the spiritual head of Svaroopa Vidya, is such a Guru. She is able to reveal the Truth of your own being to you, because she has found it in herself and lives in that knowing all the time.

To your inherent Divinity, again and again I bow.