Katha japa.h
Every word of a great Master is mantra.
Even their ordinary conversation is the repetition of mantra.
— Siva Sutras 3.27

This yogic text describes an enlightened being, plus it tells you how to get there.  Mantra is one of the most important tools.  When you repeat a mantra, especially one that has been enlivened by a Self-realized teacher, something happens on the inside. Repeating an enlivened mantra turns your awareness inward and gives you the experience of your own Self. But, for the Self-realized being, every word they speak is a mantra.  They’re not limited to Sanskrit.

I first became aware of this at Swami Nirmalananda’s ashram. A number of us were in the dining room having lunch with Swamiji.  I was fortunate that she sat right next to me. In our lunch conversation, I noticed that when Swamiji spoke, my awareness began to turn inward, just like when I repeat mantra or meditate. I realized in that moment that there was no mundane conversation with Swamiji. I realized that even in a seemingly mundane conversation, her words were revealing my Self to me.

Another thing I realized from that experience is the importance of having a Self-realized teacher. Yogic teachings have traditionally been handed down from teacher to disciple verbally. The reason is that the teachings are living teachings, something gets lost when they are just written down.

It’s magic really. When you sit in a room with a Self-realized teacher and hear them give teachings, you are having the experience of the teachings at the same time you are learning about them.  This can’t be found in a book alone. 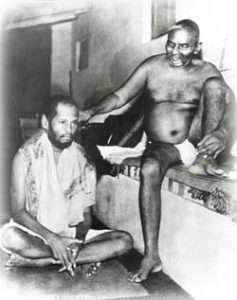 The closest I’ve come to having this experience outside of being with Swamiji is when I’m repeating mantra. It’s not a mantra that I got out of a book or on the internet. It is a living mantra, one that was verbally bestowed on me. The only reason I’ve really been able to have this experience on my own is because the mantra was given directly to me. Swamiji calls it “an investiture.”  This is the power of the words of a Self-Realized teacher.

Time spent with such a teacher is invaluable. If you have the great fortune of spending time with a great being cherish it. You are receiving something that cannot be found anywhere else, you are receiving your own Self.