The last of Lord Vishnu’s avatars that have already taken place are the eighth, Balarama (the powerful one) and the ninth, Krishna (the one with dark complexion).  His avatar that will come in the future is Kalki.

As Rama Avatar, Adhishesha incarnated as Lakshmana, the younger brother of Rama.  He obeyed Rama and spent his entire life to serving him.  Lord Vishnu wanted to return the favor in His next incarnation: to honor Adhishesha’s devotion he made him be one of his Avatars while also making him his elder brother.  Therefore, Balarama Avatar was at the same time of the Krishna Avatar, Krishna being the younger brother of Balarama,

Krishna always obeyed Balarama; Balarama protected Krishna at all costs.  Unlike Krishna, Balarama was fair complexioned.  Otherwise they looked alike in many aspects.  Both these avatars of Lord Vishnu will be written in the same story, which is part of the great epic Mahabharata.

What is the Mahabharata? 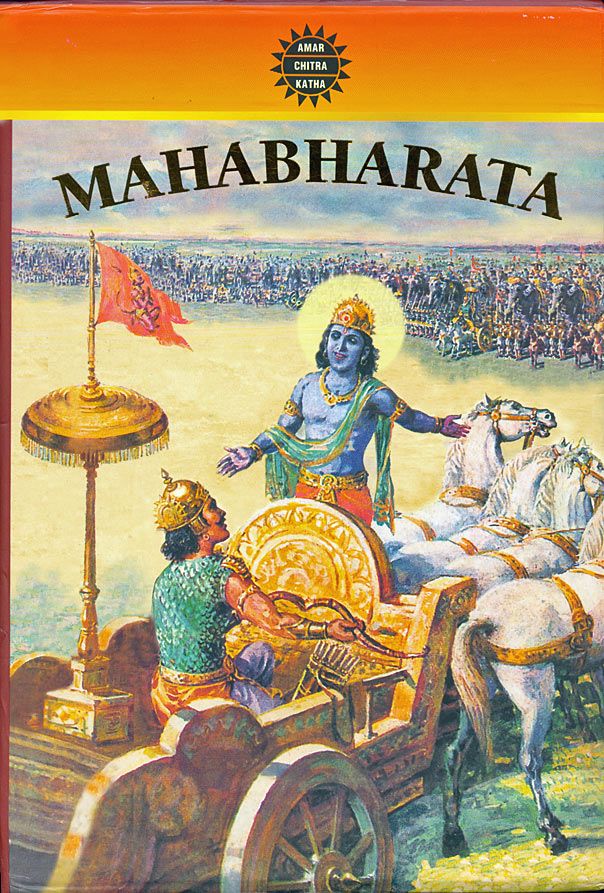 The Mahabharata is the longest epic poem in the world.  It consists of numerous branches of stories, with hundreds of characters shaping the story line.  With over 100,000 slokas (a couplet), meaning 200,000 individual verse lines, and long prose passages, it has around 1.8 million total words.  It is about ten times the length of the Iliad and Odyssey combined, nearly four times the length of the Ramayana.

In the Indian tradition Mahabharata is sometimes called the fifth Veda, after the well-known four, Rig Veda, Yajur Veda, Sama Veda and Atharva Veda.  In the Mahabharata, unlike Rama in the Ramayana, Krishna uses some of his divine powers to get things done, steering the way through the evil he is trying to overcome.

Now, we are in Kali Yuga, with good and evil residing in the same person.  The yugas (ages) have progressed, from Satya Yuga to Treta Yuga, to Dvapara Yuga and now to Kali Yuga.  In this cosmic timeline, the state of affairs has degraded from all good to mostly evil.  With this progression, who can predict what Lord Vishnu will have to do and what powers he will have to use in his final avatar, Kalki?

The Mahabharata is divided into 18 sections or books, with many sub-stories supporting the main story line.  The main story line revolves around two groups of cousins, the Kaurava and the Panḍava princes, and the war between them, the Kurukshetra War.

On the battlefield of Kurukshetra, the Bhagavad Gita was given to the world by Krishna as a teaching to Arjuna, one of the Pandava cousins in the war.  The Bhagavad Gita is one of the most important texts of ancient India.  The Bhagavad Gita presents a synthesis of Hindu ideas about dharma, theistic bhakti and the yogic paths to liberation or self-realization.  It talks about four paths to spirituality: karma yoga, bhakti yoga, raja yoga and jnana yoga.

Known as the “Father of the India,” Mahatma Gandhi referred to the Bhagavad Gita as his “spiritual dictionary.”  He used it as a guide in leading the Liberation Movement of India, helping gain independence from the British without a war, through upholding ahimsa (non-harming).

While Krishna and Balarama are the third set of cousins in the Mahabharata, Krishna is the center of all the drama that takes place.  He directs everything to perfection, teaching humans about what evil can bring about in the world.  In contrast to Rama Avatar, where Lord Vishnu as Rama shows the world how a person should live, in Krishna Avatar he shows how people should not live.

Vyasa (often called Veda Vyasa) is the author of this great epic.  He is credited with classifying the Vedas, writing the eighteen Puranas, writing the Yoga Bhasya (a commentary on Patanjali’s Yoga Sutras), and composing the Mahabharata, among other things.

It is mentioned in the first section of The Mahabharata, that Lord Ganesha wrote down the text as Veda Vyasa dictated it.  As per the legend, Vyasa wanted to compose the Mahabharata.  For this he needed a very intelligent person to write it down.  So he prayed to Lord Brahma to help him find such a person.  Brahma said that the only one capable of handling such a task would be none other than Lord Ganesha.  Vyasa prayed to Lord Ganesha, requesting him to help.

With a smile, Lord Ganesha agreed to Vyasa’s request but under one condition.  Ganesha will not stop writing once he starts the work and, if at any point Vyasa lags, then Ganesha would stop writing and Vyasa would need to find someone else.  Vyasa agreed to the condition and made one of his own.  He requested that Lord Ganesha needs to understand each sloka before writing it down.  This bought Vyasa some time to in order compose the following sloka.

The writing of the Mahabharata began; Lord Ganesha was writing and Vyasa was dictating.  Halfway through, Lord Ganesha’s pen broke.  As he had given his word that he would not stop writing, he broke off one of his tusks in order to continue writing.  This is one of the many legends regarding Lord Ganesha’s one broken tusk.

Vyasa, son of Rishi Parasara, gave the Mahabharata to his son, Sukha Muni and his other disciples.  The sage Narada gave this knowledge to the devas, and Sukar gave it to the gandharvas, yakshas and the rakshasas.  Sage Vaisampayana gave this knowledge to the earthlings at a great yaj~na performed by Janamejaya, the great grandson of the Pandava prince Arjuna.  This knowledge was also shared by Suthar to all the rishis lived in the Naimisaranya forest.  This is how the Mahabharata reached our modern times.

We are concentrating on Krishna’s and Balarama’s life story, with the Mahabharata in the background.  In other words, if focused on the Mahabharata as the story, the start and progress of the story line would be different.  Yet the entire plot will be covered. 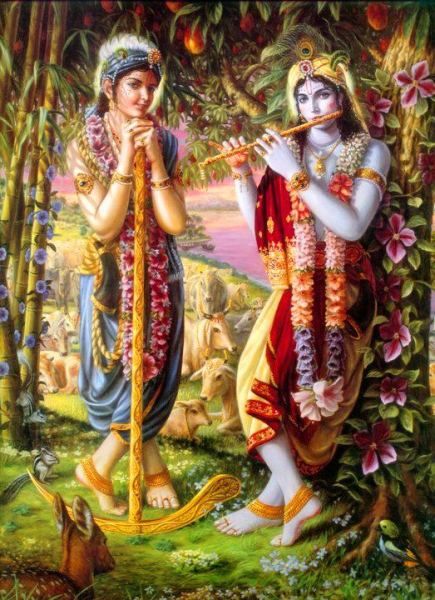 We will start with Krishna’s and Balarama’s birth, their growth, the Krishna leelas (mischiefs), their young age, Radha and Krishna, Kamsa’s (Krishna’s uncle’s) end, entering into adulthood, Balarama’s wedding and Krishna and Rukmini.  Then we will move on to the Pandava and Kaurava brothers’ ancestors, Pandavas’ and Kauravas’ birth, their growth, the conflict between these cousins, the dice game, Pandava brothers’ twelve years of exile and year incognito, the peace talks, the Bhagavadgita and Kurukshetra War.  Also we will covering Jaya and Vijaya’s liberation from their curse, due to their third human birth as Shishupala and Dantavakra, enemies of Krishna Avatar.

Balarama is usually depicted in blue garments, wearing bracelets and armlets.  His weapons are the plow (hala) and the mace (gadaa).  His hair is tied in a topknot, showing his strength, the reason for his name.

Krishna is often depicted wearing a peacock feather on his wreath/crown.  Playing the flute, he is usually shown standing with one leg bent in front of the other.  He is sometimes shown with cows or calves, which symbolizes the divine herdsman, herding the souls.

The story begins in the next installment.