Lord Vishnu incarnated as Parashurama in order to exterminate the evil kings who had derailed from their path of justice and righteousness.  These kshatriyas (warriors) had become a great burden to Bhumata (Mother Earth) and her children.

The great king Gadhi had a beautiful daughter, Satyavati.  Richika, son of Bhrigu (one of the seven Rishis), wanted to marry Satyavati, so asked for her hand from King Gadhi.  Richika was an ascetic, so King Gadhi was not interested in marrying his daughter to him.  The king decided to demand something extraordinary from Richika, to bring an extraordinary gift for his daughter — one thousand white horses who each had one green ear. 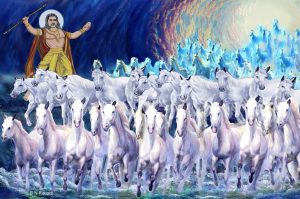 Being the son of a great rishi, Richika went to God Varuna for help and was thus able to bring these unique horses.  King Gadhi was very pleased by Richika’s determination and gave his daughter in marriage to him.  The king gave blessings to both of them to live happily.

While Satyavati adjusted well to an ascetic life due to this blessing, she did not have any children.  Meanwhile, at her home kingdom, her father had no heir to the throne.  She pleaded with Richika to help her and her mother with getting children.   Richika agreed to help both of them.  With the help of his father, Rishi Bhrigu, Richika prepared two portions of sacred rice and milk.  The portion for Satyavati was so she would have a son who would become a great sage; the portion for her mother was for her to have a mighty kshatriya son to rule the kingdom.

Unfortunately, not trusting her son-in-law, Satyavati’s mother switched the containers.  In time, both mother and daughter found they were expecting children.  Looking at both women, Richika knew that something was not right, asked his wife about his concern.  Coming to know what had happened, he said to his wife that her mother has committed a grave blunder.  Satyavati’s brother will be a great sage instead of a warrior, and Satyavati’s son, though being a sage, will be an ill-tempered warrior, far from the sage Satyavati was expecting to have.  Seeing her distress, unable to turn everything around, Richika made amends, such that her grandson would be of such ill-tempered nature.

Satyavati gave birth to a son, Jamadagni, who became a great rishi.  Once grown, Jamadagni was married to Renuka, known for her chastity and devotion to her husband.  Such was her faith that she was able to fetch water every day from the river for her husband’s puja in a leaky pot of unbaked clay she made each day, with the pot held together only by the strength of her devotion. 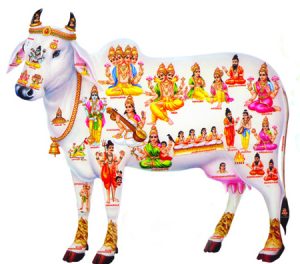 Rishi Jamadagni’s Ashram was on the banks of the Narmada River, where he educated whomever sought knowledge.  Due to the family’s poor financial situation, Jamadagni meditated and received a sacred cow, “Kamadhenu,” from Brahma, capable of fulfilling the needs of any number of people in Jamadagni’s Ashram.

Renuka gave birth to five sons (some stories say seven): Vasu, Viswa Vasu, Brihudyanu, Brutwakanwa and Rambhadra (also known as Rama).  Rama was the sixth incarnation of Lord Vishnu, an ill-tempered warrior sage known as Parashurama.  For good or bad, due to His grandmother and great-grandmother’s mistake, though being a rishi’s son, Parashurama had an inordinate love for weapons and had Kshatriya (warrior) traits in him.

Parashurama always carried an axe, which he had received from Lord Shiva after pleasing him with His meditation, thus the name “Parashu” (axe) + Rama = Parashurama.  He was an ardent devotee of Lord Shiva, from whom he learned the methods of warfare and other skills.  Parashurama would not tolerate any harm done to Shiva’s name or Shiva’s devotees.

As usual one day, Renuka went to the riverbank to make her clay pot and bring water to the Ashram.  While at the river, in the water she saw the image of a gandharva (heavenly being) in a chariot, passing by in the sky above.  She thought, “What a handsome man!” and lifted her head up to look at him.  Filled with desire for only a moment, losing her chastity, the unbaked pot she held dissolved in the river.  She tried making the pot over and over again, but failed.  Afraid to return to her husband, she waited at the riverbank, uncertain of what to do next.

It was getting unusually late and Jamadagni grew impatient.  Through the power of his meditation, Jamadagni came to know what had happened at the riverbank.  Unusually enraged, he ordered his first four sons to behead their mother.  Horrified, they refused and the enraged rishi turned them into stones.  He waited for his youngest son, Parashurama to return from an errand and gave him the same order.

Without any questions, not knowing what had happened, Parashurama, the ever-obedient son, went to the river bank.  He worshiped Renuka Devi and beheaded her.  He returned to the Ashram with unbearable grief.  Pleased with Parashurama, Jamadagni offered to give anything Parashurama wanted.

Parashurama asked for two boons, by one he wanted His father to forgive His mother, purify her of her sin and bring her back to life with no memory of this event.  The other boon was to bring back His brothers to life and flesh, again with no memory of this event.  Impressed by the affection and devotion of his son, Jamadagni granted both His requests.  Then, Parashurama went to the forest to do a severe penance for killing His mother.  He returned to the Ashram after years of penance.

The kshatriya king of the local kingdom was Kartavirya Arjuna.  He was an evil ruler, harming all the people and the earth for selfish reasons.  Kartavirya Arjuna was born as a deformed child with no legs.  He worshipped a God known as Dattatreya, embodiment of Lord Vishnu himself, born to Sage Atri as his son.  For Kartavirya Arjuna’s obeisance, Dattatreya had granted him a flying golden chariot that could travel wherever he wished, as well as one thousand arms.

With these boons, Kartavirya Arjuna became immeasurably powerful, conducting many military conquests with ease.  He also was fond of hunting with his entourage, ranging in the forests of his kingdoms.  Kartavirya Arjuna’s violence was unbearable.  All the sages, people and even Devas approached Lord Vishnu, requesting him to help them.  Understanding the agony everyone was going through, Lord Vishnu said that he will be taking incarnation to protect them all.  This is why Lord Vishnu incarnated as Parashurama.

When Kartavirya Arjuna was on one of his usual hunting trips, he accidentally came upon the hermitage of Jamadagni.  Parashurama was away in the forest at the time.  As with any visitor, Jamadagni greeted the king and offered food to him and his entourage, as Jamadagni had Kamadhenu to feed any number of people.

Amazed by the amount of food offered to him and his entourage, coming to know that it is from Kamadhenu, Kartavirya Arjuna decided that Kamadhenu should belong to him.  As Jamadagni refused to give Kamadhenu to him, Kartavirya Arjuna ordered his soldiers to forcefully take the cow and its calf with them to the palace, devastating the Ashram. 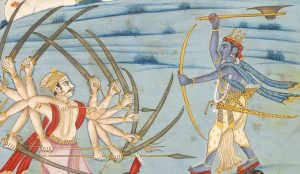 Parashurama found His mother and father in dismay on His  return from the forest.  Enraged, he went to the palace requesting the cow and the calf back.  When Kartavirya Arjuna refused, Parashurama challenged him to a battle.  Kartavirya Arjuna came out to fight, with his one thousand arms firing five hundred arrows at the same time.  Parashurama defended himself with ease, cut all of Kartaviryaa Arjuna’s one thousand arms and killed the mighty king with His invincible and terrible axe.  Retrieving the cow and the calf, he returned to the Ashram.  Hearing what had happened, Jamadagni ordered his son to undertake a pilgrimage to holy places to get rid of His sin of killing a king.

While Parashurama was away on the pilgrimage, Kartavirya Arjuna’s sons came to Jamadagni’s hermitage to avenge their father’s death.  Jamadagni was meditating in the Ashram; they beheaded him.  The virtuous Renuka Devi’s cry reached the ears of Parashurama, who returned to the Ashram at once.

Coming to know what had happened, took the vow to punish any kshatriya king who was deviating from the path of justice and righteousness.  He started with the sons of Kartavirya Arjuna, slaying any king who he found guilty.  Soon, kshatriyas across the land learned to fear Parashurama and His great axe.  So great was their fear of Parashurama, that they sent their women and children into hiding, disguised as brahmins. 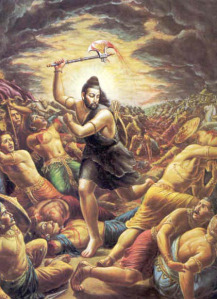 Parashurama travelled around the earth twenty-one times and exterminated twenty-one evil king dynasties, as His mother in agony had pounded her chest 21 times after her husband was killed.  At last, Parashurama’s great anger was appeased.  He had accomplished the mission that he was born for.

He then donated all the kingdoms that he conquered.  Most of the kingdoms were without a ruler.  Some of the kshatriya children, who escaped by going into hiding, continued the line of kings, so a new ruling class emerged.  These new rulers remembered the lesson that Parashurama’s dance of destruction had taught them.  They were a great deal better than their predecessors and ruled justly.

Parashurama is chiranjivi (immortal), still living among us.  Parashurama’s story continues all through the rest of Lord Vishnu’s avatars.  He will be the martial arts Guru to Kalki, the tenth incarnation of Lord Vishnu, yet to come.

There is another interesting episode in Parashurama’s story that isn’t part of any other of Vishnu’s avatars.  While there are many versions of the story of Lord Ganesha’s broken tusk, this is the version with Parashurama. 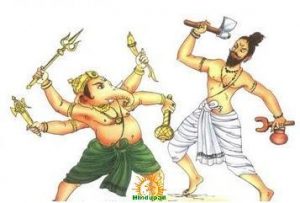 They fought for a long time without clear victory in sight for either one of them.  Finally, Parashurama, with a lot of anger, took His axe, the Parashu given to him by Lord Shiva himself, and threw it towards Lord Ganesha.  Lord Ganesha saw the axe coming, while knowing that His father had given the axe to Parashurama.  He didn’t want to disrespect His father’s gift, so He allowed the axe to strike him.  It struck one of Lord Ganesha’s tusks, breaking it with a thundering sound.

Seeing this, Parashurama stopped fighting.  Hearing the sound, Mother Parvati came rushing out.  Seeing what had happened, She was enraged, ready to punish Parashurama for what He had done.  Lord Ganesha pleaded with His Mother to forgive Parshurama and somehow succeeded in calming her down.  Parashurama was so pleased with Ganesha that He gave Him His axe and blessed Him.