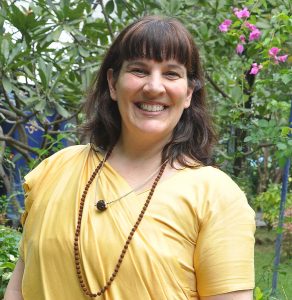 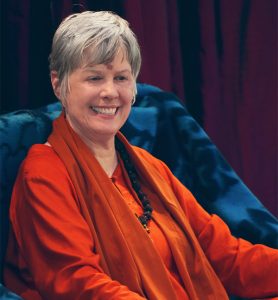 In India, the land of its origin, the poses are only 10% of yoga’s technology.  The other 90% is about your mind and getting beyond your mind, to experience svaroopa, your ever-blissful Divine Essence. Body-centered practice goes by the generic hatha yoga.  The West offers many brand names, including Svaroopa® yoga.

The generic hatha has two translations, literal and mystical.  Literally “effort-filled,” it is even translated as “forceful” and “violent.”  It doesn’t mean you should hurt yourself!  It means you can propel yourself towards enlightenment through rigorous self-effort.  You can push yourself.  Hatha yoga is DIY (Do-It-Yourself). 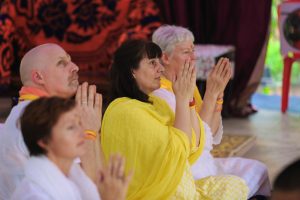 Contrast this with 90% of the yogis in India.  They are sitting:  sitting to listen to their Guru expound on the teachings, sitting to contemplate the teachings they’ve heard, sitting in meditation, sitting to watch the sunrise or sunset, sitting as they participate in rituals, sitting and waiting for their own Divinity to fill into the stillness they’ve created in their mind.

Swami Nirmalananda describes a yoga therapy conference she attended, “I arrived fresh from a yoga retreat in India.  I’d been sitting for long sweet hours of meditation and traditional ceremonies.  I joined 2,000 other yoga teachers and yoga therapists for the first plenary session, a full two hours of PowerPoint presentations by medical researchers, showing how they proved that yoga works.  I arrived a little late, so I sat in the back of the hall and watched the drama play out.

“Within 30 minutes, the 2,000 yoga teachers and therapists were squirming in their seats.  They couldn’t pay attention to the presenters.  They were wiggly, noisy and distracting.  After another 30 minutes, the moderator announced, ‘I know it’s hard for you to sit, so we’re adding in a break after our next presenter.’ I was shocked.  They couldn’t sit!  They think yoga is about movement.” 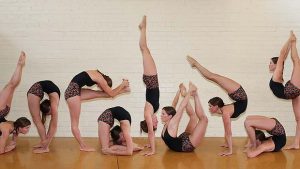 Yoga has been growing in the West since 1893, when Swami Vivekananda brought it from India.  Western yogis now compete for championships and even Gold Medals.  Google it; yoga is a sport.  This is a different direction than the sages intended.  Hatha yoga is described in the texts as efforting practice, a way to apply yourself physically, but for progress toward Enlightenment, not towards mastering a pose or perfecting your body.  Ultimately your physical mastery gives you the ability to apply yourself to more subtle and interior practices.

Let’s look at the second meaning of hatha, the mystical meaning, found in every Sanskrit word.  The syllables ha and tha name the energies that flow along the two sides of your spine:  ha — along the right side of your spine; tha — along your left.  When you open and balance these two flows, the energy shifts and flows through the center of your spine.  In the beginning, this flow is prana, your body’s own healing power.  Grace invokes a stronger flow: the transformative power of Consciousness, the power of your own upliftment.  This is Kundalini.  This is the Svaroopa® yoga difference.

In this mystical meaning, hatha doesn’t mean effort-filled or forceful.  You won’t get any spinal release if you’re forcing.  You have to ease off.  You may have already experienced the difference: working, pushing and trying in a pose compared to propping, softening and settling into the precise angles. More change happens when you effort less.  When you combine precision with compassion, something happens. This is Grace, the power of inward expansion.

To summarize, hatha has two meanings: 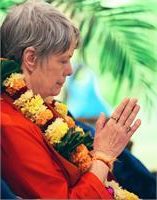 Svaroopa® yoga is a path of Grace.  Everyone else is on the other path.  In Rukmini’s first yoga class, the movements of those athletic, acrobatic yogis were graceful.  But the Grace of Svaroopa® yoga is completely different.  Swami’s beloved Guru, Baba Muktananda, gave her Shaktipat initiation, awakening the dormant energy called Kundalini.  Kundalini is your own Divinity in a seed form that grows and blossoms within.  That transmission created Svaroopa® yoga and enlivens it today.