From the time of the Churning of the Ocean of the Milk, the Devas and Asuras have been in turmoil, because the Asuras had to forego the Amrita due to their attempt to steal all of it.  Victory alternated from one to the other.  The defeated party then declared war at a favorable time later.  The continuous hatred between the Devas (gods) and the Asuras (demons) affected all three worlds, due to the suffering and death of war as well as the fear of war.

After the successful reign of Prahlad, his son Virochana became the king of Asuras. Virochana’s son Mahabali (Bali) often played on the lap of his grandfather, Prahlad.  Bali became a great leader who brought peace to his land.  Like Prahlad, Bali was a great devotee of Lord Vishnu.  Bali learned the Vedas from his grandfather and later from his Guru, Sukracharyara, the Great Guru of the Asuras. 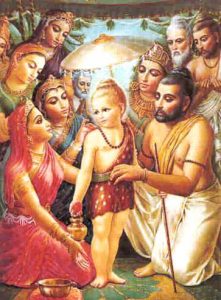 The Asuras became bold and courageous with Bali as their king.  Many heroes and scholars, who had previously taken shelter elsewhere, now rallied together under the Bali’s leadership.  Bali appointed scholars and wise men as officers in his administration.  Sukracharyara, the renowned wise ascetic, continued as their Guru, also serving as chief priest and chief adviser to the king.

Bali set out on an adventure of world conquests with his ministers and generals at the head of his army.  Who could have opposed the invincible warrior-king?  A few kings accepted his over-lordship, surrendering without fighting.  A few did so after their defeat.  A few more courted his friendship.  Having conquered the whole world, Bali became the emperor.

Not content with his emperorship of Patalaloka (the Nether World) and Earth, due to some of the Asura’s influence, Bali became greedy and wanted to rule Heaven too.  In order to take the place of Indra (the King of Heaven), being guided by his Guru Sukracharyara, Bali performed the Vishwajit sacrifice on the bank of the Narmada River, a yaj~na for the purpose of becoming the king of three worlds.

Bali then set out to conquer Amravati, the capital of Heaven, in his divine chariot which he had obtained from Agni, the fire God.  Bali was also wearing the lotus flower garland presented by his grandfather and carrying the conch gifted by his Guru.  Lord Indra knew He was not going to be able to stop Bali, due to the guidance of His Guru Brihaspati, He abandoned Heaven and went into exile.  Bali ascended the throne of heaven and became the lord of the three worlds.

Indra’s mother Aditi was saddened by His defeat and, with the help of her husband Sage Kashyapa, made a vow to seek help from Lord Vishnu.  Pleased by Aditi’s devotion, Lord Vishnu appeared and asked what she wanted.  Aditi said that she wanted her son Indra to be reinstated as the King of Heaven.  Lord Vishnu said, “Even though Bali is a great king and a great leader, your worship shall not prove fruitless.  Since Bali has become greedy and has shortened your son’s rule, I will be born as a son to you to protect Indra and the Devas.”

A few months later, Lord Vishnu was born to Aditi as His sixth incarnation.  As Kashyapa and Aditi stood amazed, Lord Vishnu changed His form to a very short-statured brahmin (priest).  Named Vamana, clad in a loincloth, with matted hair, He carried a wooden umbrella in one hand and a kamandala (a small water-pot) in other one. 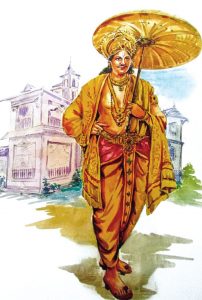 Though Bali was ruling all three worlds, his desire continued to grow.  To become even more powerful, he performed the Great Yaj~na, as guided by his Guru Sukracharyara.  For the yaj~na to be successful, the person performing it must give whatever anyone asks from him.  Last in the line of people waiting to receive gifts stood the short brahmin, Vamana.  Everyone watched him, as He was illuminating the whole place with His gracefulness, even though He was a dwarf.

When Vamana came forward, Bali and his wife followed tradition by washing His feet.  Bali then asked, “O holy brahmin, what can I do for you?  Ask from me whatever you desire.  Do not hesitate; ask for whatever you want!  Cows, elephants, horses, chariots, villages, anything?”

Vamana shook His head and said, “All I need is the amount of land that is three paces long as measured by my stride.”  Bali was very disappointed with Vamana’s humble demand and said, “I am ready to grant you a whole continent, but all you wish is three paces of land?”  Bali laughed, “You shall have as much as you want.”

At that moment, Shukracharya felt something was wrong.  He stopped Bali as he took the holy water kamandala in his hand, to grant the request.  Pulling Bali aside, Shukracharya said, “Stop!  There is some scheme or plot behind this midget brahmin.  He is not the person He looks to be!”  Bali replied, “Nothing can be done now, I have given my word.  How can Bali, the grandson of Prahlad, refuse to fulfill a promise, like a common cheat?”

Shukracharya was convinced that this little Vamana was none other than Lord Vishnu himself, the sustainer of the three worlds, but in disguise to help Indra and the Devas.  He warned Bali, but it only made Bali happier, knowing that his Lord had come to ask something from him.  Since he couldn’t persuade Bali from his own destruction, Shukracharya changed himself into an insect and went inside the kamandala to blocked the spout so that Bali couldn’t pour the water to fulfill the request.

Lord Vishnu saw the situation.  He took a stem of holy grass and poked open the spout of the kamandala with it.  That injured one of the eyes of Shukracharya so that water flowed out from it.  Taking that water in his hand, Bali announced, “Holiest of all brahmins, Vamana, with this water I grant your wish.”

To everybody’s surprise, except Shukracharya, Vamana began to grow and grow.  Bali and everyone were astounded when Vamana began to measure the three paces with His feet.  With the first stride He covered the entire Earth & Patalaloka.  With His second stride, He covered Heaven. 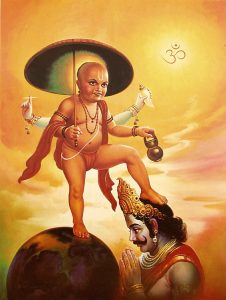 Then Vamana asked Bali, “You promised me three paces of land.  I have covered all that was yours in two.  Where should I place my third stride?”  Now, confirmed that Vamana was none other than Lord Vishnu, Bali said, “O Lord, I am humbled by Your presence.  Please place your third step on my head and get rid of my greed!”  Lord Vishnu smiled and placed His third step on Bali’s head.  With the immense pressure of Lord Vishnu’s foot, Bali was pushed down to Patalaloka.

Indra was reinstated to Heaven’s throne, which made Aditi happy.  The Devas were very happy for getting their kingdom back.  As Bali had been His true devotee, Lord Vishnu blessed him and gave him the right to rule Patalaloka as long as he wanted to.

Then He told Bali to ask for anything he wished for.  Bali asked Lord Vishnu to be present in front of him day and night, so that he can worship him constantly.  Lord Vishnu said, “Your wish is granted, you will see me all the time!” and vanished.  To keep His promise, Lord Vishnu became Bali’s doorkeeper, standing in front of Bali all the time, though Bali had no clue.

Goddess Lakshmi and all of the Devas missed Lord Vishnu, who was not in Vaikuntha.   earning what had happened, She disguised herself as an ordinary woman and visited Bali in Patalaloka.  She said to Bali, “Your Majesty! My husband has gone to fulfill some errands and is not at home.  I need protection.  I heard that your kingdom is the safest place, please give me protection too!”   Moved by Her words, Bali said, “Lady!  You are like a sister to me.  Please come and stay in my palace, stay here as long as you wish!”

She thanked Bali and started living in the palace in Patalaloka.  Since the Goddess of wealth was in Patalaloka, it became a very prosperous place and everyone living there was very happy; Bali’s kingdom was flourishing.

One day Bali heard his sister saying her prayers.  Bali asked, “What are you praying for?”  She said, “I am praying for a long and healthy life for you, my brother.”  Bali was so happy and said, “Ask me for whatever you want, I will give it to you, my sister!”  She smiled and said, “Brother, I want my husband back.”  With a puzzled look Bali asked, “Your husband…?”  She then pointed towards the gatekeeper and said, “That is my husband….” Bali was unable to wrap his head around what was going on, but was intent on keeping his word, so he said, “Yes, you may have Him back…” 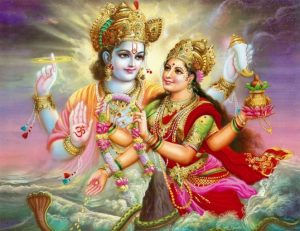 Before Bali realized what was going on, Lord Vishnu and Goddess Lakshmi appeared.  Bali was shocked to learn that, all these days, it was Lord Vishnu as his gatekeeper and that his so-called sister was Goddess Lakshmi.  He fell to their feet and apologized.  “I was keeping my word!”  Lord Vishnu said and continued, “It was your honesty and which brought me here.  As promised, I was in front of your eyes day and night.”

Bali then sought forgiveness from Goddess Lakshmi for unknowingly keeping Lord Vishnu away from Her for a long time.  Goddess Lakshmi said, “Bali, it is not your fault, this is always His behavior.  He is always in front of His devotees, day and night, even if they don’t realize it!”  Lord Vishnu and Goddess Lakshmi returned to Vaikuntha. Bali wisely ruled Patalaloka as long as he wanted and attained moksha at His Lord’s feet.