Newly introduced to the mysteries of yoga, this idea clashed with what I had been taught — that God incarnated only once, thousands of years ago, and I missed the chance to meet him.  As a pre-teen, this made me angry.  I would have wanted to live 2,000 years ago!

As I got to know the teachings more fully, and as I observed and benefitted from my Guru, a Divine Human himself, my mind and heart expanded to embrace all forms of Divinity.  What a benevolent God, who will incarnate to help us as many times as needed.  I love it!

Whenever dharma, the inherent order of the universe, is endangered, God comes to rescue us.  Lord Vishnu is the one who serves as our Protector and Sustainer.  He promises to incarnate into this world to reinstate dharma, to protect and to destroy evil and reinstate righteousness.

Unfortunately, there have been many times that we needed such Divine intervention.  Of His numerous avatars (incarnations), ten are mainly for the purpose described above, so they are called the Dashavataras (das = 10).  According to the Puranas, nine of them have already taken come, with the tenth to come at the end of this age (called Kali Yuga). 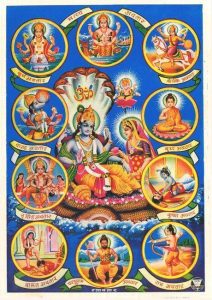 The ten avatars are:

In some areas of India, Gautama Buddha (Siddhartha Gautama) is honored instead of Balarama.

The orders in which these avatars came is similar to the theory of evolution:

This blog is an introduction to a series telling the stories of each of these avatars. Some of these avatars have a lot of information available about them, while some have less.  Therefore the length of the stories will vary accordingly.  Swami Nirmalananda says, “They each bring important lessons, to help you in your process of spiritual upliftment, the discovery of the inner mystery of your inherent Divinity.”