Krishna and Balarama were growing up.  Krishna was so good a flutist, everyone was mesmerized by the music and sat listening to it for hours and hours.  Not only the people of Vrindavan, but also the birds and animals went through the same experience.  Both his father and mother, King Nanda and Yashoda, were so proud of their son, not really knowing who Krishna was.  Of course, if he had a flute in his hands, who would not experience a blissful state?

One day, taking the calves out for grazing, Krishna and the gopalas went along the Yamuna River to where a multi-hooded black serpent, Kaliya, lived with his family.  Kaliya previously lived near the banks of Ramanaka Dvipa, but had been chased away by Garuda, the king of the eagles, because Kaliya had been polluting the waters with its venom.

Now Kaliya was poisoning the Yamuna waters, knowing that Garuda wouldn’t come there due to a curse by Saubhari Muni.  Kaliya’s poison contaminated not only the waters, but also spread miles around, even polluting the air such that flying birds would fall unconscious or dead to the ground.  No one from Vrindavan went to the vicinity of Yamuna where Kaliya lived. 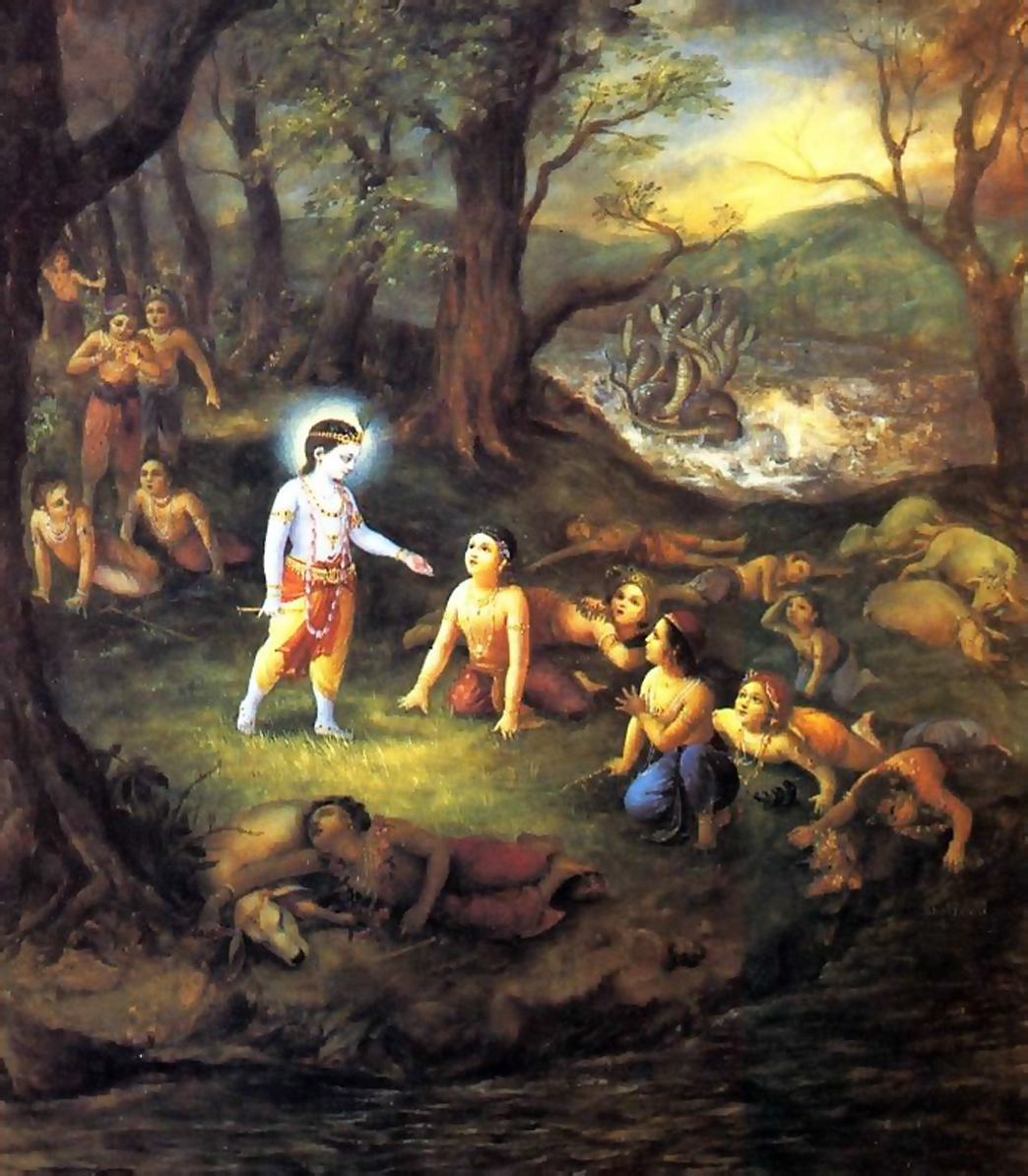 Reaching there, the boys were very tired and desperately thirsty.  They drank the poisoned water from Yamuna and fell unconscious on the riverbank.  Seeing this, Krishna immediately revived them with his divine powers and decided that Kaliya must be stopped.

Krishna climbed one of the largest trees on Yamuna’s bank and jumped into the middle of the poisoned body of water. His huge splash woke Kaliya, who started searching for the intruder.  Finding Krishna, Kaliya slithered near, furious that Krishna had entered its territory and disturbed its rest.  Not knowing who Krishna was nor his intentions, Kaliya ferociously attacked Krishna.

When they arrived, Kaliya had grabbed Krishna in his mighty coils and was squeezing him hard.  While Krishna was calmly watching what was happening from within the coils, the villagers were trying to figure out a plan to help Krishna.  On seeing this, as usual, Yashoda fainted, screaming her son’s name, ”Krishna!  Krishna!  Krishna!“

Balarama was enjoying the show, laughing inside because knew exactly what was going to happen.  When King Nanda was preparing to jump into the river, Balarama calmly restrained him and others from going in.  Then he attended to Mother Yashoda.

Krishna had been in Kaliya’s grip for a long time, though Kaliya was not able to crush Krishna.  Yet the villagers were in distress.  Deciding to relieve them from the distress, with one push Krishna came out of Kaliya’s grip.  This enraged Kaliya, as no one had ever escaped his coils, so he tried to sink his fangs into Krishna.

Kaliya spat poison all over Krishna, who was evading all the snake’s attacks.  The battle went on for a long time, above and under water.  While Krishna was having fun, the villagers were highly tense, but Balarama was enjoying the show. 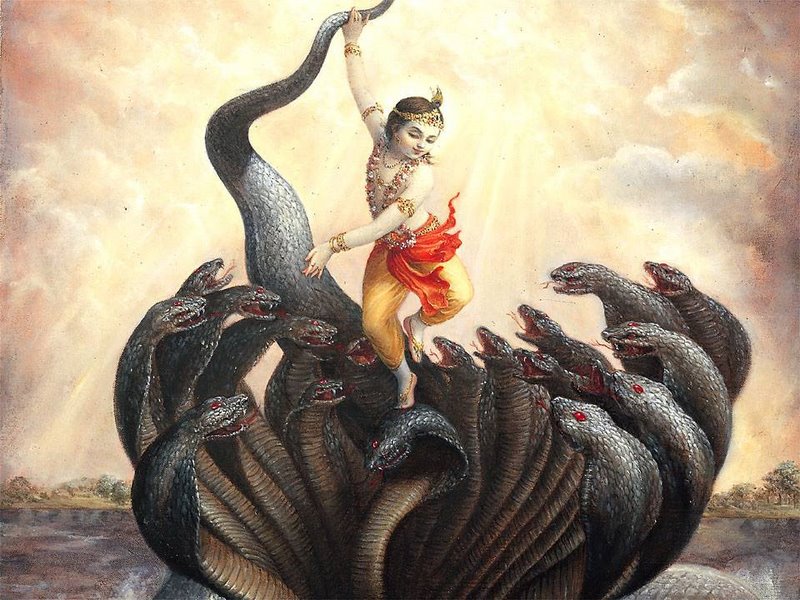 After a while, Krishna jumped on top of one of Kaliya’s hoods and started dancing, embossing his feet on the snake’s hood.  Krishna moved from one hood to another, making Kaliya spit out all the venom and some blood too.  Krishna made sure that Kaliya didn’t have any venom left to harm anyone.  While on the snake’s hood, Krishna started to dance and play his flute with a blissful melodious sound.  Everyone could see this dance from the river bank, all puzzled about how this was possible.

The serpent got weaker and weaker, losing all his venom and energy.  He was at the verge of losing his life, so all of Kaliya’s wives prayed to Krishna to let their husband live.  They bowed to Krishna.  Krishna stopped his dance, with Kaliya barely conscious.  He ordered Kaliya and his family to leave Vrindavan, never to return to the vicinity.  He also commanded them to return to Ramanaka Dvipa, promising that Garuda will not hurt Kaliya due to Krishna’s footprints embossed on Kaliya’s head.

After gaining full consciousness, Kaliya complied with Krishna’s command, promising never to attack anyone, and returning to Ramanaka Dvipa with his family.  No one knew of the conversations between Krishna, Kaliya and his family, but everyone was relieved that Krishna was safe and Kaliya was gone.  Yashoda was the happiest!  Balarama was the only one smiling and calm through what was going on.  Since that day, that portion of the Yamuna was back to its original beauty and resourceful state.

It was already night.  The villagers of Vrindavan were all very tired from witnessing the long fight between Krishna and Kaliya as well as Krishna’s divine dance.  Their day had been filled with intense emotion and they had little energy to walk back to their village. The cows were hungry and tired too.  So, they decided to spend the night on the Yamuna riverbank.  King Nanda was worried about Krishna, thinking he may have been poisoned by Kaliya, so he wanted to keep an eye on him. 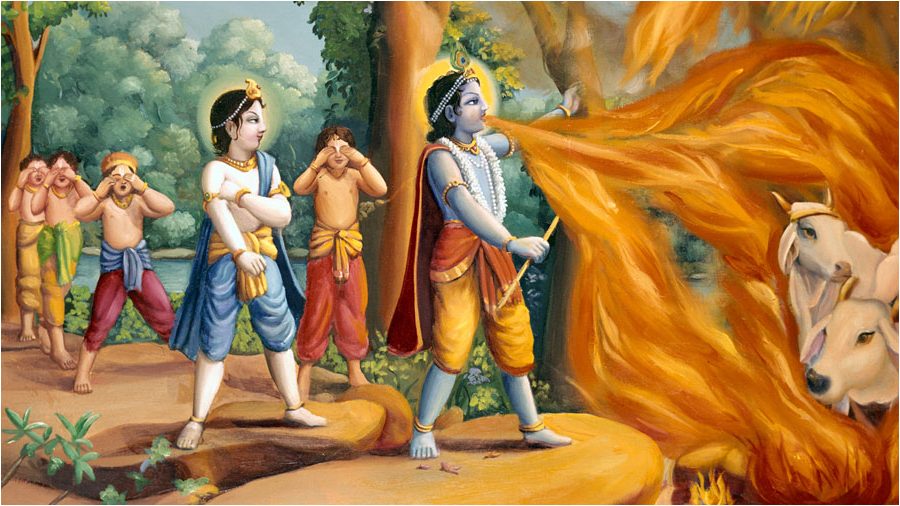 While they were sleeping, a great forest fire broke out.  It spread quickly due to strong winds. When the villagers felt the heat of the fire, they woke up and cried out for help. Hearing their cries, Krishna immediately opened his mouth very wide.  With one gulp, he swallowed the whole forest fire, saving all the villagers and their cows once again, as always the Lord protects his true devotees. Krishna was taken in grand procession back to Vrindavan by his friends, parents and villagers singing and rejoicing his victory and safe return.

King Kamsa was very tired of losing all his demons to Krishna.  He called the strongest demon he knew, Pralambasura, ordering him to kill Krishna.  They devised a plan to separate Krishna and Balarama, as it would be easier to kill them one by one.  Pralambasura waited for Krishna and the children in the area for few days.

One evening, Krishna, Balarama and their friends were playing in the meadow while the cows and calves were grazing.  Soft breezes carried the fragrance of the flowers over the meadow, through the forest and into the whole area of Vrindavan. The boys played different games each day, like hide and seek, tag, swinging under the trees, wrestling, and sometimes they would innovate new games as well.  They would dance while Krishna played the flute, or they admired Krishna’s dancing while they sang and clapped.

That particular day was hot and sunny, so they went deep into the shade of the forest, staying cool under the trees.  Pralambasura disguised himself as a boy and went toward the children.  He hid behind the trees. waiting for a good opportunity. Krishna saw him, a boy hiding behind a tree, and realized it was a demon in disguise.  Of course, Lord Krishna knows all things, including past, present and future, so he recognized the boy as Pralambasura.

Krishna invited the disguised Pralambasura to play with him and the gopalas.  He proposed they play tug-of-war, dividing them into two teams.  The losers were supposed to carry the winners back to the village when it was time to return.  Everyone liked the idea of a joy ride, hoping their team gets to win.  With Balarama on one side and Krishna on the other, Pralambasura joined Krishna’s team.   Pralambasura, as the boy, thought that his plan was working, that Krishna was so stupid as to invite him to play with him.

The tug-of-war ended with Balarama’s team winning.  Pralambasura devised the brilliant idea to carry Balarama away, he can deal with him first. He offered to carry Balarama back to the village while the other losing team members carried the winners.  As they started running, Pralambasura lagged and strayed, taking Balarama deeper into the forest, going in a different direction than the village.  Slowly Pralambasura shed the boy’s body, taking on his real form, hurrying to take Balarama away in order to kill him. 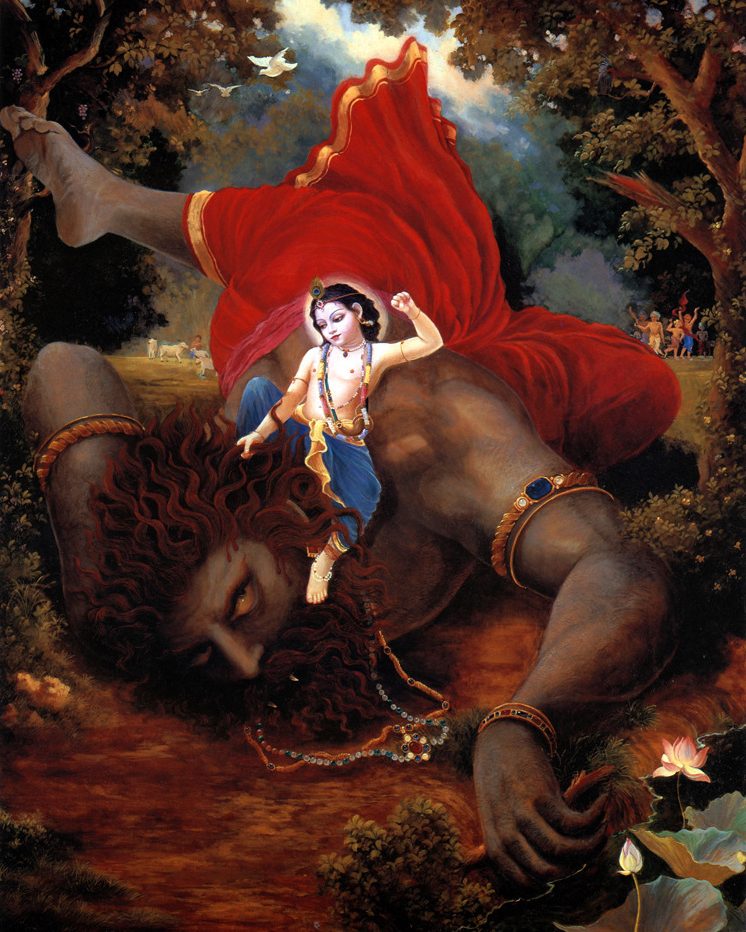 When Balarama identified that he was riding on a demon, he shouted, “I am being carried by a demon in the opposite direction of where my friends are headed.”  Krishna heard him and understood that Balarama wanted Krishna to stay with their friends and take care of them.  Their friends were worried that a demon had taken Balarama.  Krishna told them that he was worried too, but not about Balarama.  Krishna was worried about the fate of the demon.

Krishna was right; Balarama fearlessly began to strike Pralambasura. First Balarama tightened his legs around the demon’s neck, strangling him.  Then Balarama used his mighty fist to land a single blow on the demon’s head. The demon let out a fierce roar and fell to the ground, dead.

The loud sound was heard miles away. Balarama came dancing towards his friends. The gopalas embraced Balarama with great affection and began to praise him.  With his divine smile, Krishna stood looking at his beloved brother.  Pretty soon, all of Vrindavan resounded with the tale of Balarama’s strength.  His foster father, Nanda, remembered why he was named “Bala” Rama and Garga Muni predicting his extraordinary strength and valor at the naming ceremony   Kamsa had failed again.