After Rama’s crowning, his Ayodhya kingdom was flourishing.  Some time passed with the citizens in unbounded joy.  One day, as Rama was doing his routine checks on his citizens by going in disguise from street to street, he overheard a conversation that concerned him.  A husband and wife were arguing.  The wife had been away from home for some time and had just returned home to be with her husband.  He was refusing to accept her back, since she had been away from him for a long time, as he was doubting her chastity.  Thus, the husband was shouting at her, “Do you think that I am Rama, King of Ayodhya, accepting his wife after her being away for so long, staying under the custody of a stranger?”

Rama felt as if his heart was pierced by an arrow.  He thought, “All this time, I have been living by the law of righteousness but I have not realized about what my citizens thought about my actions.  I need to understand my citizens’ feelings in order to be able to rule the country well, with laws that fit everyone!”  His heart was filled with sorrow as he returned to the palace, thinking he failed on his duties. 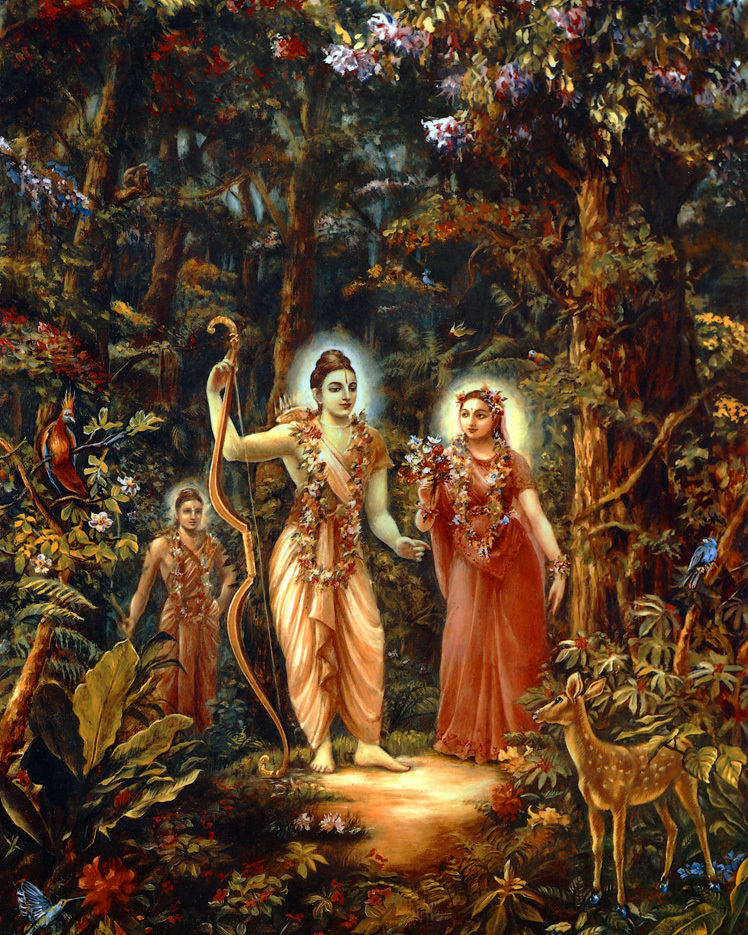 Being a democratic ruler, he decided to banish his pregnant wife Sita from Ayodhya, though it was with unbearable pain.  He asked Lakshmana to take Sita to the forest, there to inform her of his decision.  No matter how much Lakshmana tried to present a case against Rama’s decision, it didn’t work.  Lakshmana found that he was hurting his brother more, for he was already in unbearable sorrow with what he had ordered.

Taking his brother’s orders, Lakshmana left to fulfill this duty.  With a very heavy heart he took Sita to a nearby forest and told her that Rama had ordered him to leave her in the forest, giving all the details.  At his first explanation, Sita cried out, “How can Rama do this to his pregnant wife, who proved her chastity in Lankapuri!”  Then, coming to terms with what was happening, she decided to abide by her husband’s wishes and said farewell to her beloved brother-in-law.

Unable to bear what he was doing, Lakshmana sought Hanuman and let him know what had transpired.  Without a word, Hanuman just leapt up to fly in the direction where Lakshmana had abandoned Sita.  Nothing was the same after this: the Ayodhya kingdom was in darkness, as was Rama, who preferred to be alone with his thoughts of his beloved Sita. 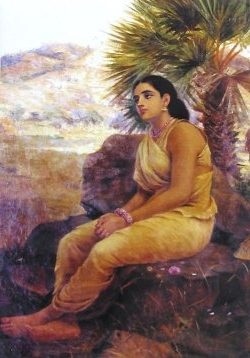 In the meantime, after a long search Hanuman found Sita, but he kept himself hidden since he had not gotten any orders from Rama to help her.  But he promised himself that he will not let any harm come to Sita.  Sita roamed in the woods for hours and days, sobbing in grief.  Hanuman silently followed her around with no direct way to help her, leaving fruits on her way for Sita to eat.  In her state of mind, she only nibbled on them and continued to wander aimlessly through the woods.

Sita was very tired and sat down to rest a bit.  Some young sages-in-training walked by her and stopped in surprise when they saw her.  They wanted to know who she was.  Not wanting to reveal who she really was, Sita said that she is a pregnant woman seeking shelter.  They started hurrying back from the way they had come, saying they were going to bring help.  Taken by her divine beauty and her sorrowful state, the young sages went back to the ashram and told their Guru Valmiki about what they saw.

There once lived a hunter named Ratnakara, a thief and ruthless man.  He killed harmless birds and gentle animals for food, robbing anyone and everyone who passed through the forest in which he lived.

One day he came across the Saptarishis, the seven great sages of all times.  He decided to rob them as well.  He stopped them, threatening them with his weapons, demanding all the wealth they possessed.  The sages explained that they had surrendered themselves to God and didn’t own any wealth. 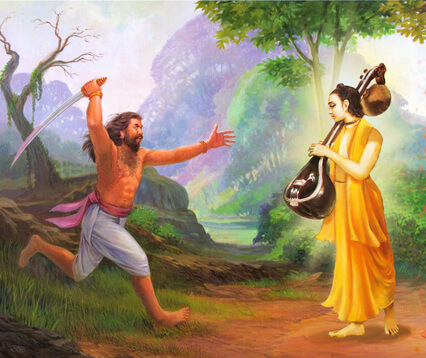 The hunter went straight to his wife and asked whether she is willing to share his sins.  Even though she was benefiting from his sinful life, she refused to share the sins.  Hoping that at least his children would partake of the sins with him, he was heartbroken by hearing the same answer from his children.  In disbelief at what he had heard, he returned back to the sages with a heavy heart.

Ratnakara threw himself at their feet, asking to redeem his soul.  The sages blessed him and gave him a mantra.  He couldn’t remember and say the holy name of “Rama,” so they gave him the mantra “ma-ra,” meaning “kill,” but which is an inverted version of “Rama.”  He was asked to repeat the mantra without interruption until they returned.  Ratnakara sat in a meditative pose, reciting the mantra for years.  An anthill formed around him, ultimately covering him fully.

After many years, the seven rishis returned and brought him out of his great tapas (austerities).  He came out a person different in every aspect.  The rishis blessed him as one of the great rishis, naming him “Valmiki” since he came out of “valmik” (anthill).  With the rishis’ blessings and with his spiritual energy and knowingness, he earned the respect of everyone from everywhere.

Once he was visited by Maharishi Narada.  Valmiki welcomed Narada with great respect.  Narada blessed Valmiki and they started conversing about great beings living by righteousness.  Valmiki asked Narada to name the most perfect being, who is living a dharmic life.  Narada immediately named Rama, the King of Ayodhya.  Narada started telling the wonderful story of Rama, which fascinated Valmiki.  Valmiki was very grateful to hear the story of Rama, and continued to repeat it in his mind all the time as though he were hearing it afresh. 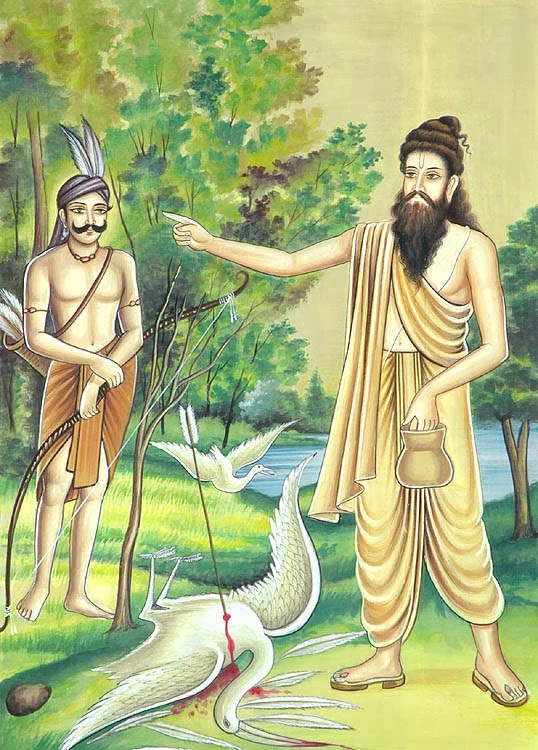 One day Valmiki was on his way to have a bath in the Tamasa River, attended by one of his disciples.  He saw two birds on a branch of a tree, courting and cooing together.  Mesmerized by the birds’ love for each other, Valmiki stood there watching them.  As he was admiring them, a hunter killed one of the birds; the other one was devastated and in deep sorrow.

In his grief, Valmiki cursed the hunter for being so cruel.  The Sanskrit words he uttered spontaneously, because of his grief (shoka), came out in verse form, with melody and rhythm.  This was the first “shloka” (Sanskrit stanza) ever.  At that very moment, Lord Brahma, the lord of creation, appeared in front of him and requested Valmiki to write the story of Rama as narrated by Narada.  Brahma blessed him to write what he knew and that the unknown would be given to him.

With that blessing, Valmiki sat in a meditative pose and the story started unfolding in front of him as though he was witnessing the whole thing all over again.  Valmiki started writing the first epic of all times, “Ramayana” in stanza form.  After finishing writing the Ramayana, he started reading it to the public at large.  The crowd was spellbound by the story.

Back to the main story…

A little while later, the young sages returned with their Guru, Rishi Valmiki.  As soon as the Rishi saw Sita, through his spiritual insight, he knew who she was.  He introduced himself as Valmiki and invited Sita to his hermitage, greeting her with utmost respect, offered her help, assured her of his guidance and protection.

Not revealing Sita’s true identity to anyone, Valmiki asked everyone at the ashram to treat her with all the love they had.  Sita, abandoned by her husband, found love and support from Valmiki and his disciples.  Especially the female ascetics took special care of her, as she was pregnant.