Even though Krishna returned from Hastinapura in haste due to Satrajit’s death, he never stopped fulfilling his duties to the Kuru family.  Knowing in his heart that the Kuru cousins were safe, still he sent Uddhava to find them and report back to him.

So, who are these cousins of Krishna from the Kuru family?

The above question takes us into the epic of Mahabharata!  They were the Pandavas of the Lunar Dynasty.  We have to go back a few generations to start the story of the Pandavas.  Let’s begin with the name of the epic, “Mahabharata.”  While it is a long story, we will look at a concise version of it.

There once lived a king of the Lunar Dynasty, named Dushyanta.  He had a great passion for hunting.  On one of his hunting trips in the jungle, he found Shakuntala, the daughter of Menaka, a celestial nymph of Lord Indra’s court and the great sage Vishwamitra.  It is said that Lord Indra himself, frightened by Vishwamitra’s yogic powers and fearful of losing his position as Lord of the devas, sent Menaka from heaven to earth to lure Vishwamitra and disturb his intense meditation.  Menaka successfully inflamed Vishwamitra’s lust and passion; she succeeded in breaking his meditation.

However, she genuinely fell in love with him and had a baby girl.  The baby girl born to them was left at Rishi Kanva’s ashram with both the parents departing to follow their own pursuits.  Rishi Kanva found the baby surrounded by shakunta birds, so he named her Shakuntala.  Thus Shakuntala became the foster-daughter of Rishi Kanva. 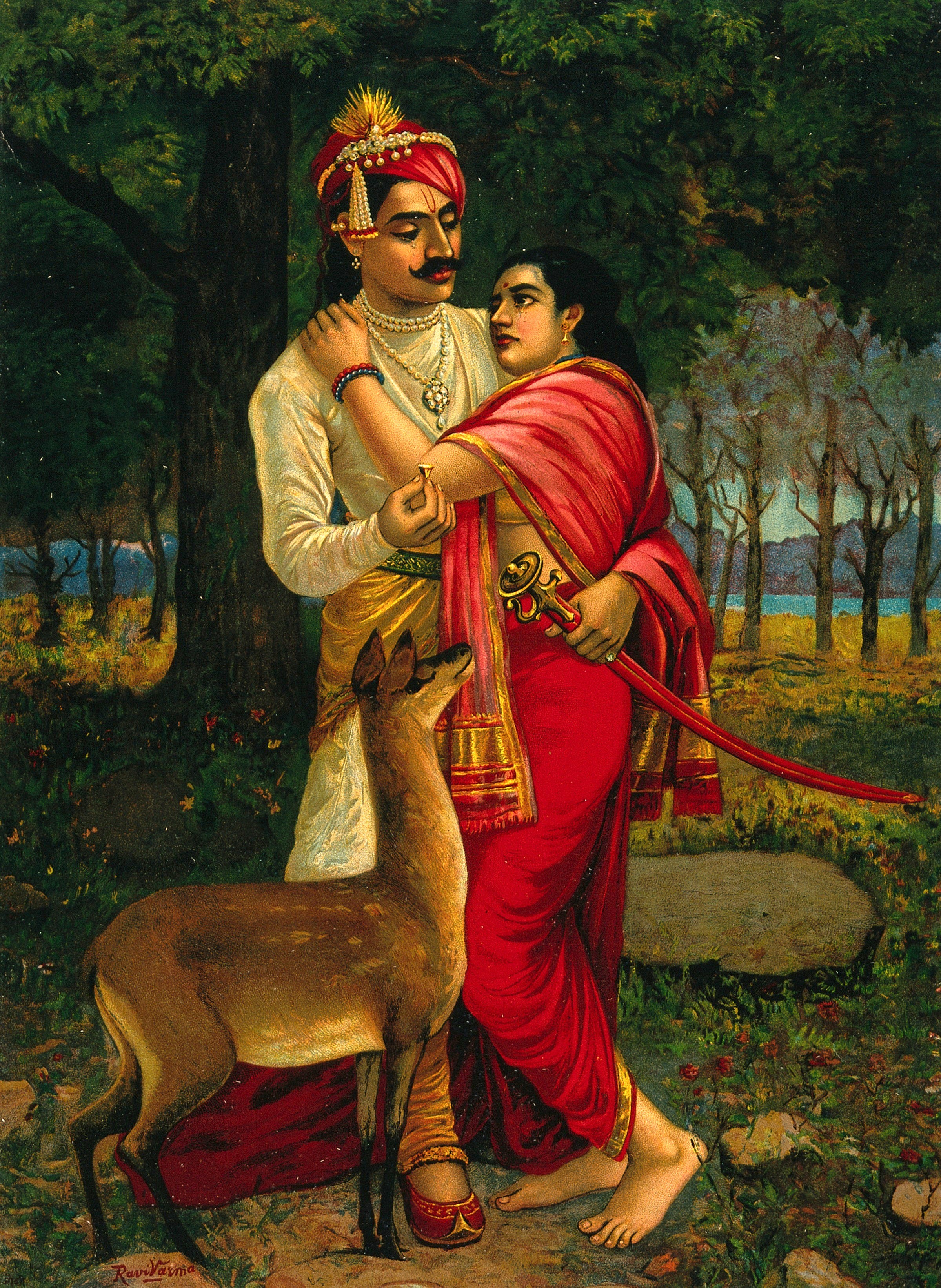 Mesmerized by her beauty, Dushyanta married Shakuntala in a Gandarva marriage (love marriage with no rituals or witnesses), promising to return for her even though being with her in the jungle for only a few days.  He gave his royal ring, embossed with his name, as a token of love.  Shakuntala anxiously waited for Dushyanta, losing herself in thoughts of him.

One day Sage Durvasa, known for his fiery temper, visited Rishi Kanva.  However, Shakuntala was inattentive to Durvasa as she was thinking about Dushyanta.  Angered, Durvasa cursed that the person of whom she was thinking would forget her.  Shakuntala pleaded with Durvasa, but he said he couldn’t take the curse back, but that she could show Dushyanta something he had given her, such as the ring, and he would be freed from the curse.

Due to the curse, Dushyanta forgot Shakuntala.  He never came back for her.  Desperate, Shakuntala went to Dushyanta’s kingdom.  On the way, she lost the ring in the river.  A fish swallowed it and swami away.  As Shakuntala didn’t have the ring to bring Dushyanta out of the curse, he didn’t recognize her.  Shakuntala had to return to the forest and remain deserted by Dushyanta. 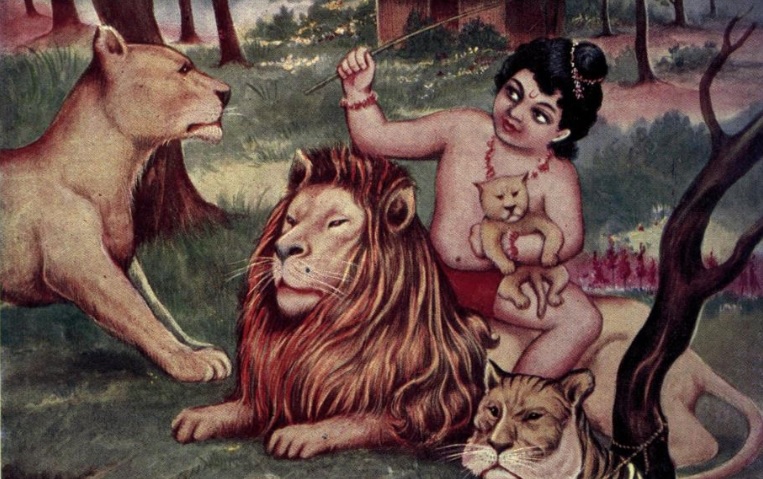 In time, Shakuntala gave birth to a baby boy.  Shakuntala’s son was brave and courageous.  His name was Bharata.  From an early age, he played with lions, tigers, elephants and other wild animals.  It is told that he opened a lion’s mouth with his bare hands to count the number of teeth it had.  Shakuntala, watching her son, was sure that he would become a great courageous leader one day.

A few years later, a fisherman found the royal ring in a fish in his catch.  He took it to Dushyanta, as his name was on it.  Upon seeing the ring, the curse was lifted.  Dushyanta remembered Shakuntala and rushed to the jungle to find her.  Arriving at Rishi Kanva’s Ashram, he found Bharata playing with the wild animals like toys.  He approached the little boy, asking who he was?  The little boy replied that he was Bharata, the son of the great king Dushyanta and Shakuntala.  Astonished by this answer, Dushyanta sadly realized his error of leaving Shakuntala.  He hugged his son with great love and affection.  He took Shakuntala and Bharata back to the palace.  Succeeding his father, Bharata became the king and soon an Emperor.  He became the greatest of all the kings, a universal emperor.  India’s original name came from him, “Bharat” or “Bharatavarsha,” before the European invasion.  Hence we see the name, “Mahabharata,” which is Maha + Bharata, meaning Great Bharata.

A number of descendants in Bharata’s line ruled Bharatavarsha.  In that line, King Hasti and his grandson King Kuru, were very popular.  Hastinapura was named after King Hasti and the Kuru family got the name after King Kuru.  Kuru’s son was Pratipa, whose son was Shantanu.  The saga of Mahabharata formally begins with the rule of King Shantanu, known for his valor and wisdom.

King Pratipa had three sons; Shantanu was the youngest.  King Pratipa’s eldest son, Devapi, had leprosy and therefore gave up his inheritance to the throne and became a hermit.  The second son, Bahlika, abandoned Hastinapura, and lived with his uncle in Balkh, later inheriting his kingdom.  Thus, Shantanu was crowned as the king of Hastinapura.  He was young when crowned because his father had him later in life. 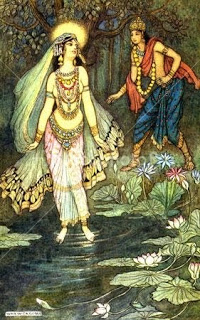 Shantanu was a benevolent and wise ruler, very much liked by the people of his nation.  One day, the young king Shantanu was walking along the river Ganga, and saw a beautiful young lady.  She walking on the water as though she was walking on the ground, then came ashore and continued to walk on the riverbank.  He was mesmerized and fell in love with her in an instant.  He told the beautiful lady that he had lost his heart to her, that he is the king of Hastinapura who wants to marry her.  He would make her the queen of Hastinapura.  She said she would accept his proposal under two conditions: 1) he must never ask her about who she is or where she came from, and 2) he should never interfere in what she does.  Continuing, she told him that if he violated either of these conditions, she will leave him immediately.

The conditions stunned Shantanu; they would never be agreeable to a king.  But, for the love stricken Shantanu, it was unthinkable to refuse any of her demands, in order to have her hand.  He accepted both conditions immediately.  The beauty married Shantanu under the Gandarva marriage rites (love marriage with no rituals or witnesses) on the spot.

King Shantanu left his ministers to take care of the kingdom and completely concentrated only on his wife.  He called her “Ganga,” as he had found her near the river Ganga.  Shantanu’s life went smoothly and happily for some time.  In due course, Ganga gave birth to a lovely baby boy.  Shantanu was overjoyed to hear the news and rushed to his wife’s quarters.  The queen was silently taking the newborn towards the river Ganga, where Shantanu had met her for the first time.  Shantanu was puzzled but followed her quietly.  When she arrived at the riverbank, she turned and smiled at Shantanu, then put the newborn into the river, letting the currents wash the baby away.  She started walking back to the palace with satisfaction in her face.  Shantanu was speechless, unable to believe what he had seen the love of his life do to their child.  He wanted to ask her, why she did it, but remembered the conditions and kept quiet.

A few weeks passed, then Shantanu came to know that Ganga was pregnant again.  His sadness about the earlier son faded away.  He was eagerly awaiting the birth of his child.  The day came and he was blessed with another son.  To his astonishment, Ganga marched with the baby in her arms towards the river again.  It was the same fate for the second son as the earlier one.  Shantanu was in great grief, but he could not say or do anything as he was bound by his promise.

Ganga did the same thing over and over again, giving Shantanu’s sons to the river.  After she drowned the seventh son, Shantanu was lost in deep thought all the time.  Life was very painful for him.  He couldn’t tolerate what Ganga was doing, but his love for her prevented him from saying anything as he didn’t want to lose her. 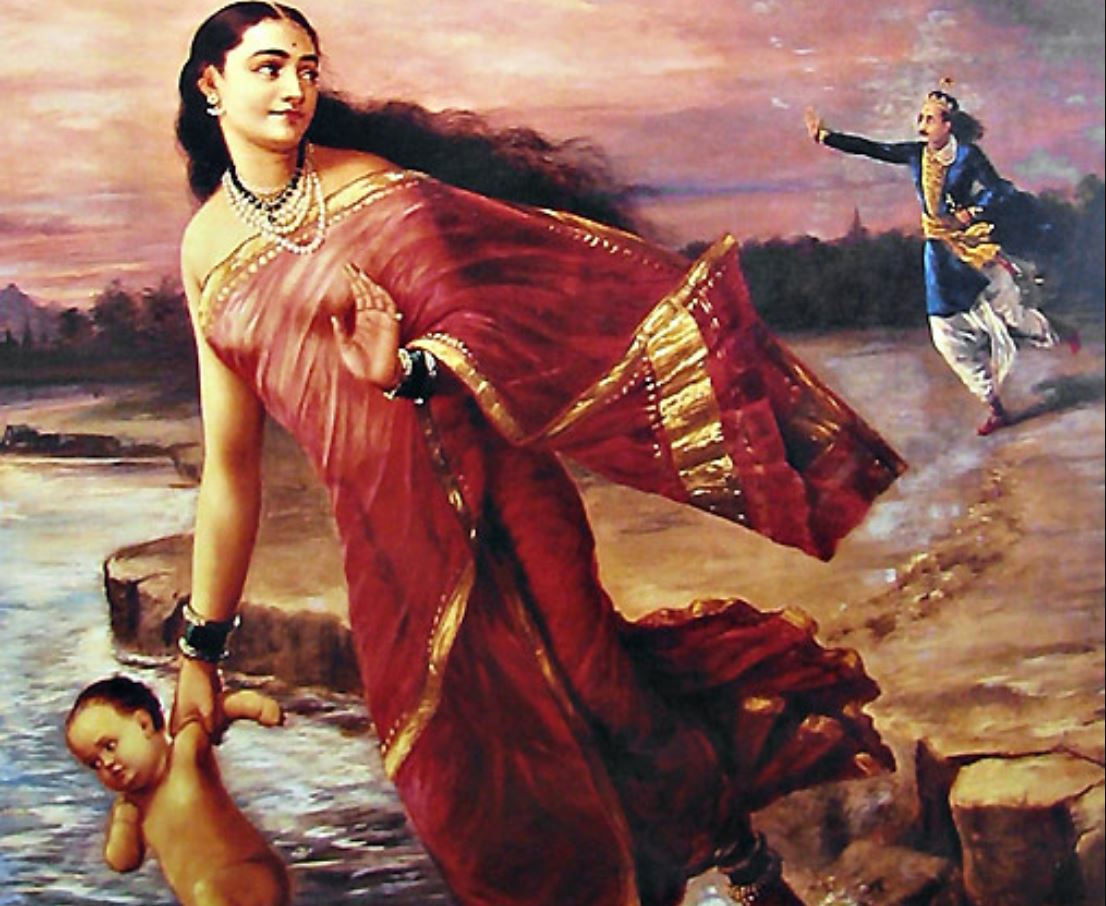 Running out of patience, Shantanu decided to stop the drowning of the eighth child.  The time came.  His eighth son was born.  As usual, the queen was off to the river.  When she was about to drop the baby into the river, Shantanu shouted “Stop!  You are murdering my eighth son, and I can’t allow it to happen.  Are you here to put an end to my kingdom and my dynasty?  Why, my love?”

The queen looked at Shantanu.  She said “Dear King, I am Ganga, the river itself, who came from the heavens.  Now that you have questioned me, you have broken your promise.  As for the conditions, I will not be able to stay with you any longer.  But before I leave, I will reveal the entire secret of what has happened here.”  She continued, “The children born to you were the eight Vasus, the eight elemental attendants of Indra, representing the aspects of nature.  Once, sage Vasishta got angry with them as they stole his pet cow Nandini.  He cursed them to be born as humans and undergo mental embarrassments.  Hearing this curse, seven of them implored the sage to be excused, but the eighth stood without any remorse.  Vasishta compassionately amended his curse for the first seven, so they would as soon as they are born on earth, to be able to return to Indra’s heaven.  But the eighth would have a very long miserable life due to mental suffering.  The eight Vasus came to me, asking me to be their mother on earth.  To fulfill their wish, I had to take a human form and free them from their curse.  I liberated the first seven.  My job is done here.  I will take your eighth son with me, to teach him to be potent enough to withstand what this world is going to throw at him, mentally and physically.  When he grows up to an age, studying everything he needs to know, I will come back and return him to you.”  Saying this, hugging her baby, she flashed into the sky.