Ganga was born as the eldest daughter of Himavan, the king of the Himalayas.  She was not only beautiful, but also had the power of purifying anything she touched.  This quality made her a favorite among all, especially the Devas (Gods).  Led by Lord Brahma, they came to Himavan requesting him to let Ganga go with them to the heavenly realm. 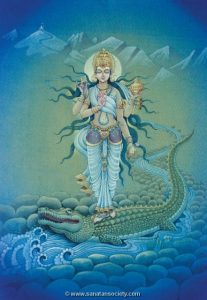 King Himavan was saddened by this request, but for the greater good of the three worlds he agreed to part with his first-born.  He blessed his daughter to go with them and told her to serve them dutifully.  In her absence, it became impossible for the people to live peacefully on the earth.  The Asuras (demons), who hid in the ocean during the day, came out at night and started harassing everyone.  Not knowing what to do, the people decided to hide in caves.

Lord Brahma and the Devas felt sympathy towards the people of earth and decided to help them to find and conquer their mysterious tormenters.  They went to Lord Vishnu, the sustainer of the three worlds, to ask for guidance.  Lord Vishnu told them the only way to defeat the Asuras was to dry up the ocean they hid in.  He then said that Sage Agastya was the only one capable of doing that job. 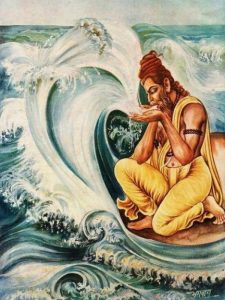 Hearing this from the Divine Protector, the Devas led by Lord Brahma went to see Sage Agastya.  The great sage agreed to help the Devas by drinking up the ocean.  This exposed the Asuras, helping the Devas vanquish the Asuras.  The Devas pleaded with Agastya to fill up the ocean with the water again, but the sage couldn’t do it as he had already digested it.

Devastated, the Devas ran back to Lord Vishnu seeking help to solve the new problem.  Vishnu told them that only the descendants of King Sagara could cause the ocean to be filled up again, so they needed to be patient as Sagara had no children yet.

King Sagara was yearning for heirs, so he decided to perform intense tapas (yogic austerities) dedicated to Lord Shiva, to win the boon of having children.  Lord Shiva responded, appearing to King Sagara and his two wives.  Shiva was pleased by their devotion and granted the boon.  By this boon, Keshini gave birth to one son and Sumati gave birth to the 60,000 sons.  While Sumati’s 60,000 sons grew up conscious of their royal status, Keshini’s son Asamanja was a wicked prince.  However, Asamanja was the only son who had a son, Amsuman.  He was opposite of his father, strong and brave like his uncles, also kind and loving.

King Sagara decided to perform the great Ashwamedha Yaj~na to earn the blessings of gods, making him a mighty king.  In an Ashwamedha Yaj~na, a horse was set free with an army following it.  As the horse goes where it likes, if no one opposes it and imprisons it, it then returns to the yaj~na location.  If the horse is imprisoned, the king must free it by peace or by force.

Indra, the king of Devas, suspected his own position would be threatened by Sagara’s Ashwamedha Yaj~na, so Indra stole the horse and tied it to a tree at Sage Kapila’s ashram.  When the horse didn’t return, King Sagara ordered his 60,000 sons to find it.  After a long search, they found the horse in Sage Kapila’s ashram and accused Sage Kapila of stealing the horse. 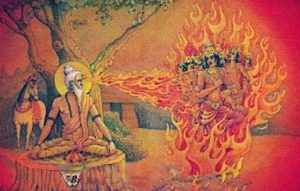 Angered by their audacity, the powerful sage opened his third eye and burned all of them to ashes, cursing their souls to be stuck in the world with no liberation and no heaven.  When his 60,000 uncles didn’t return, Amsuman went in search of them and the horse.  Finding the horse at Sage Kapila’s ashram, unlike his uncles, Amsuman greeted the sage with great respect and inquired of his uncles.  Discovering what had happened, grieving, he asked the sage for a way to liberate his uncles’ souls and send them to heaven.  The sage replied that the only way would be to bring Ganga to earth and make her touch the ashes, thus purifying their souls.  Kapila allowed Amsuman to take the horse back with him because Amsuman was patient and righteous.  Amsuman told King Sagara, his grandfather, about his uncles’ ill fate and the remedy given by Sage Kapila himself.

For many years, King Sagara, Amsuman and his son Dilipa tried but failed to bring Ganga to earth.  Day and night, the thought of the fate of the 60,000 princes tormented all of them.  Dilipa’s son, Bhagiratha made a vow at his father’s deathbed that he wouldn’t ascend the throne until he brought Ganga to earth.

Bhagiratha did severe tapas and meditation for several years, dedicating them to Lord Brahma.  Pleased by Bhagiratha’s efforts, Lord Brahma appeared before him and granted him the boon to bring Ganga back to earth.  He also said that Bhagiratha would need the assistance of Lord Shiva to soften her fall onto the earth, as no one else would be able to bear the force of her descent from the heaven.

Hearing this, Bhagiratha performed many more years of tapas and meditation, dedicated to Lord Shiva.  Lord Shiva appeared and agreed to receive Ganga on her descent to earth.  But Shiva warned Bhagiratha that Ganga should be conducted properly on earth, because she is so used to flowing anywhere at her own will.

After all Bhagiratha’s great efforts, at last Ganga started to descend to earth.  Being willful and powerful, she decided that she would come down in a torrent and sweep away everything in her path.  Shiva foresaw her intention and imprisoned her in his matted hair, only letting her flow onto earth after Bhagiratha’s plea.

But, along her way, she capriciously flooded sage Jahnu’s ashram, only to be swallowed up by the great angry sage.  Again, Bhagiratha had to pacify a great sage to release her.  Jahnu poured her out through his ear, so she is called Jahnavi, the daughter of Jahnu.

After being released, Ganga flowed over the ashes of the sons of Sagara, purifying them and releasing them to go to heaven.  Then she reached the ocean bed, filling the ocean up again.  Since she was brought back to the earth by Bhagiratha’s great penance Ganga is also known as Bhagirathi. 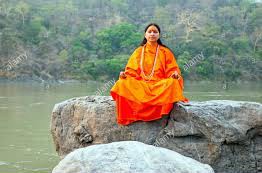 Her earthly body as a river still flows today, with her purifying everyone who comes to her.  When Brahma granted the boon that brought her back to earth, she resisted because she would collect so many sins and impurities from the millions of people who would bathe in her.  Shiva promised her that she would be freed from the weight of those burdens any time a great being stepped in her waters.