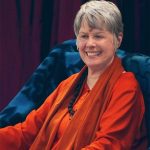 The oldest known language, Sanskrit is called the language of the gods.  It even has a verb conjugation you use only when speaking to God.  “Devanagari” is the name of the alphabet, like Cyrillic is the name of the script used for the Russian language.  Deva (देव) means god, while naga (नाग) means snake, referring to the coiled energy that brings the universe into existence.  Of course, it also names the coiled Kundalini, which certain Sanskrit mantras are designed to activate or awaken.

Svaroopa® yoga teachers often say your pose names in Sanskrit as well as English.  The English name helps you learn how to do the pose, but the Sanskrit name helps you go farther into it.  It’s easy to try.  Stand up and lean your torso forward, bending at your hips for a simple Uttanasana, letting your arms hang toward the floor.   Repeat “Standing Forward Bend” for 45 seconds.  Stay in the pose and say “Uttanasana” (oot-awn-AAW-saw-naw) for 45 seconds.  See what happens.  You’ll prove how powerful Sanskrit really is. 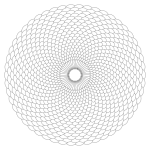 The shape of each Sanskrit letter maps the way its sound reverberates in your head, awakening the thousand-petaled lotus at the top.  Learning to use your mouth, tongue and breath to enunciate the words properly is a lesson in ecstasy.  I’ve been chanting in Sanskrit for over 40 years and know how Grace-filled this yoga practice is.  I got it from one who knows, the great yogi who gave me everything, and who empowered me to give it all to you.  Yoga is so much more than poses!

Baba always emphasized chanting in Sanskrit rather than learning the language.  Of course, I’ve picked up technical terminology along the way, just like you learn important words in other languages (i.e. burrito and lasagna).  My little joke has truth in it, for the important Sanskrit terms are about you being fed on a spiritual level (i.e. shaktipat and darshan).

Many words have no direct translation into English, like svaroopa and ahamkara.  Self is the word used to translate them both, distinguished by a “capital-S” or a “small-s” to clarify which level of personhood is being described.  But that doesn’t work well when speaking, or even at the beginning of a sentence.

Svaroopa is your “true form,” meaning your inherent Divinity.  Your body and mind are merely the outer levels of the multiple dimensions of your being.  The science of yoga gives you tools to explore the depths and vastness within.  Svaroopa® yoga specializes in this, from a powerfully different way of doing the poses to an easy and deep meditation technology.

Ahamkara means “I am what I do.”  It is how you construct a superficial sense of self, constantly judging yourself compared to others, hopefully feeling self-respect and a sense of self-worth.  It is an activity of your mind, which keeps your mind very very busy.

When you know your own svaroopa, you still do things in the world, but you’re not looking for them to give you a sense of self.  It’s like going to an ATM.  When you want your relationships and actions to build up your ahamkara (small-s self), you’re trying to withdraw money from the machine.  When you base your sense of self in svaroopa (capital-S Self), you’re making a deposit.

To your Inherent Divinity, again and again I bow.