Rama and his new wife, Sita, along with the other newlyweds, traveled to their capital city of Ayodhya.  On their return, the whole kingdom joyfully welcomed Rama and his three brothers, all with their new wives, with great devotion and respect.  Ayodhya was flourishing more than ever, after the arrival of the princes with their consorts.

A few years passed, and there was a message from Ashwapati, Kaikeyi’s father.  He wanted his grandson Bharata to stay with him in the Kekeya kingdom for some time, as his health was not good.  Dasharatha and Kaikeyi immediately sent Bharata and his wife Mandavi there to help.  Ashwapati was very happy to have his grandson with him in his last days.  Though Bharata was Dasaratha’s eldest son, thus the heir to the throne, he extended his stay in his grandfather’s Kekeya kingdom.

After a few more years passed, the aging King Dasaratha wanted to name the Crown Prince.  He decided to crown his son Rama at the Pattabishekham ceremony at the earliest possibility.  He assembled his ministers and all the elders to announce his decision.  All of them liked and agreed to Rama as Crown Prince.  Dasaratha felt that his time was running out, so he planned the Pattabishekham for the following day, especially since the next auspicious day was a few months away.

Manthara, a close personal maid of the Queen Kaikeyi, was secretly listening to this 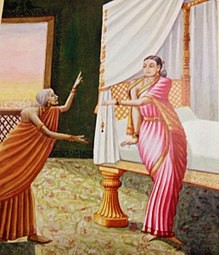 conversation and was not happy.  She remembered that Rama, as a young boy, accidentally struck her with a mud ball; she was still angry about it.  She ran to Kaikeyi with the news of Rama’s Pattabishekham on the next day.  Kaikeyi leapt out of her chair with great joy and gave Manthara the gold necklace she was wearing as a gift for bearing the happy news.

Manthara threw the necklace to the ground, asking Kaikeyi why she was so happy, “Is it because your own son, Bharatha, is not getting the crown?”  Kaikeyi replied, “No.  Rama is like a son to me; my son Rama is going to ascend the throne!”  Manthara sat with Kaikeyi and told her negative things that might happen if Rama was crowned, slowly poisoning her mind.  Manthara warned that Queen Kaushalya would be the Queen Mother, while Kaikeyi herself would be under her.  Sita, as Janaka’s daughter, might influence Rama to conquer the Kekeya kingdom, especially because Janaka and Ashwapati were not in good terms.

By the end, Kaikeyi had been convinced that her son Bharata should be the next king of Ayodhya.  But she didn’t know how to stop Rama’s Pattabishekham.  She knew her husband would not change his mind as he loved Rama so much.  Manthara slowly reminded Kaikeyi about the two boons that Dasaratha had granted her, urging her to finally use them: the first one for the Pattabishekham to be done to Bharata, the second one to send Rama into exile for fourteen years, because Bharata would not be able to serve as their real king due to the people’s great love for Rama.  Manthara also plotted with Kaikeyi about how to act when Dasaratha came to give her the news.

While Manthara was poisoning Kaikeyi’s mind, the news of Rama’s Pattabishekham spread like wildfire.  The whole of Ayodhya was singing and dancing in joy.  The people were decorating the whole kingdom in preparation for the Pattabishekham.

The king brought the news to Kaushalya and her son Rama.  Though Rama agreed to become Crown Prince, he was unhappy that Bharata was absent, so he asked for the Pattabishekham to be postponed.  Dasaratha refused, saying it needed to happen the next day. 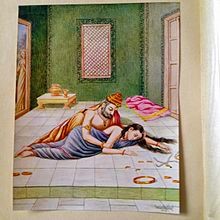 Then Dasaratha came to Kaikeyi, thinking Kaikeyi would be the happiest of all since she was the closest to Rama.  Dasaratha was in a very happy and joyful mode when he entered Kaikeyi’s palace, but found Kaikeyi lying on the floor.  Her jewelry was thrown all around, her hair undone and she was miserably clothed like a poor person.  Manthara had been a great tutor.   Shocked, Dasaratha sat next to where Kaikeyi was lying and asked what had happened.  Was she ill; should he call for a doctor?  Liftin her head slowly, Kaikeyi said she was not ill and there was no need for a doctor.

Dasaratha helped her to a nearby chair and asked why she had such a dreadful look in her eyes.  Kaikeyi said she wanted her son, Bharata, to become the next king, and that Rama should be sent into exile for fourteen years.  This was the greatest shock of his life for Dasaratha.  He fell to his knees, asking Kaikeyi to reconsider her requests, remembering that Dasaratha had a special place in his heart for Kaikeyi.

Kaikeyi’s mind had been poisoned by Manthara so much that she said these are not simply requests.  These are the boons that she had postponed from earlier, so Dasaratha had no choice but to give them to her.  Dasaratha fell to the floor with a very heavy heart.  He spent the whole night trying to pursue Kaikeyi to change her mind, but she didn’t budge an inch.  As nothing could be done, Dasaratha agreed to her request and fainted on the floor.  While this was going on in Kaikeyi’s palace, the rest of Ayodhya was getting ready for Rama’s Pattabishekham the next day.

The next morning, the ministers came to fetch Dasaratha, but Kaikeyi refused to allow them to enter.  She asked them to send Rama to her palace so his father could speak to him.  She was 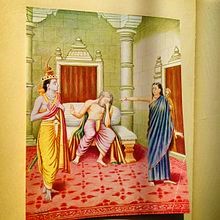 thinking that Rama would throw a tantrum when he heard the new decisions, so Kaikeyi prepared herself to be strong.  Rama came at once, obedient as always.

With a stern voice, Kaikeyi told Rama that, on her request, his father had ordered him into exile for fourteen years, and that Bharata would be installed in the Pattabishekham ceremony right away.  To Kaikeyi’s astonishment, without the least change smile, Rama told Kaikeyi “Oh, dear Mother!  I will go to the forest immediately.  You could have sent me a message to go to the forest and I would have done it wholeheartedly, simply because it is my dear loving mother’s wish.  I thank you for giving me this opportunity to be with the sages who are rooted in dharma.  Please inform my father that I am taking leave.”

He returned to his residence to prepare for the exile.  Upon telling Sita that he must go, and that she should stay in the palace until he returns, she outright refused.  She started getting ready to join him, saying, “Where Rama is, is the Ayodhya for me!”  Lakshmana found out what had happened.  Always short tempered, he was enraged, so Rama had help him bring his temper down.  Lakshmana would never part from Rama, so he joined Rama as his brother and 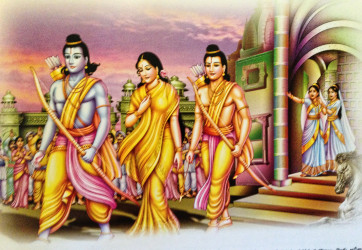 personal attendant.  Rama, Sita and Lakshmana said their goodbyes to their mothers and started their journey by foot to the forest.

The news of Rama’s exile spread like wildfire.  The people of Ayodhya were following Rama to the forest, saying they had no reason to remain in the kingdom without Rama.  No matter how much convincing Rama tried to do, it didn’t work, so he let them follow him to the forest.

When everyone fell asleep that night, Rama, Sita and Lakshmana sneaked deeper into the forest.  He asked the Chief Minister Sumantra to take everyone back to Ayodhya.  The next morning, with Rama missing, they returned to Ayodhya with a heavy heart, as commanded by Sumantra.

Meanwhile in Ayodhya, Dasaratha came to his senses after fainting the previous night, but found Rama gone.  He told Kaikeyi that she got her boons at the price of her husband’s life, and will live as a widow for the rest of her life.  He went into unbearable grief, suffering from the 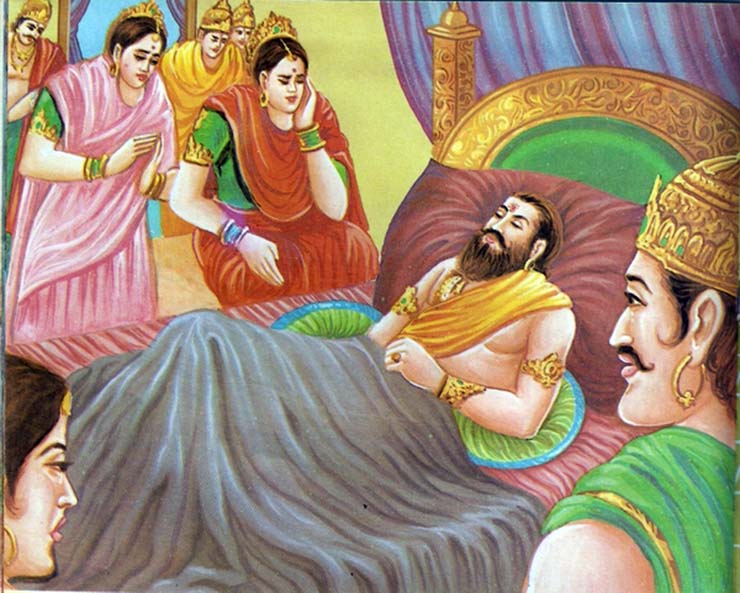 separation from Rama.  Not able to bear his son’s departure, remembering the curse from his early years, Dasaratha died with the same fate as that of Shravan’s blind parents.

Immediately Bharata was sent for.  Learning what led to such a catastrophe in the family, due to his own mother’s greed, Bharata looked at his mother severely, uttering very harsh words, “O!  Enemy of mine, in the guise of my mother!  You should enter the cremation fire or disappear into the Dandaka forest.  No other fate befits you.  I am no longer your son; neither are you my mother!  I can’t imagine, of all people, that you who loved Rama the most, can exile my dearest loving brother to the forest.  I will go to him, beg his forgiveness and bring him back with me to Ayodhya.  Or else I will join him in his path.  Do not ever come in my presence again, my demon-personified mother!”  Hearing these words, Kaikeyi realized the atrocity she had caused by her actions.

Bharata performed the funeral rites of his father.  As always, followed by his brother Shatrugna, Bharata gathered a large company of soldiers, preceptors, elders and the leaders of Ayodhya.  They went to the forest to search for Rama.

Meanwhile, in the forest, Rama, Sita and Lakshmana walked to the banks of the holy river Ganga.  There, Rama met Guha, the leader of the boatmen, who cordially served them well. 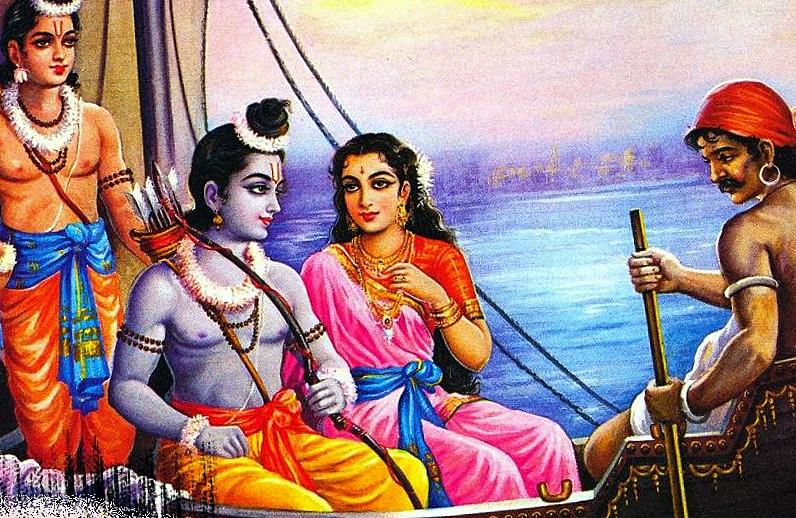 After a long and hard search, and with the help of Guha, Bharata and his entourage came to Sage Bharadwaja’s hermitage.  Bharadwaja first advised Bharata not to get emotional, telling him that what happened was not caused by a single human being, but was fulfilling a Divine Purpose.

Sage Bharadwaja then helped Bharata to find Rama.  Bharata rushed towards Rama’s hermitage.  The short tempered Lakshmana thought Bharata was there to fight Rama, and leapt up with his bow and arrow, ready to fight.  Lakshmana had to be pacified by Rama once again.

Bharata reached Rama and fell at his feet, not able to speak a word due to sobbing uncontrollably.  Bharata was wearing the same ascetic’s rags as Rama had adopted.  At once, Rama helped Bharata to rise/  Embracing Bharata, Rama asked why he was in such attire, since he was the King of Ayodhya.  Rama went on asking about their father and their mothers.

In the midst of sobs, Bharata broke the news that their father was gone.  At this, Rama lost his steadiness, then slowly regained his composure after a few minutes.  Then Bharata pled his case, begging for forgiveness for what his mother had done, and begging Rama to return to Ayodhya in order to rule the kingdom.  Rama replied that he had given his word and could only return only after fourteen years. 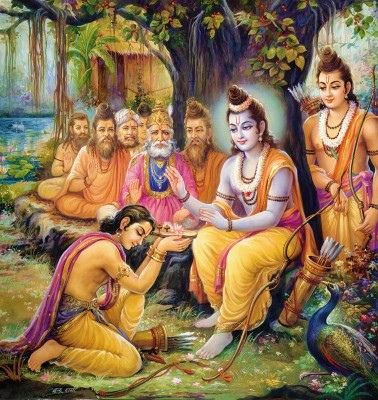 After a lot of hesitation and pushback, Bharata agreed to be the guardian of the kingdom, as the representative of Rama, until Rama’s return.  He set the condition that, if Rama is even a day late at the end of the fourteenth year, Bharata would take his own life.

He requested Rama’s sandals, so he could place them on the throne so that he doesn’t deviate from dharma.  Agreeing, Rama gave his sandals to Bharata.  Bharata carried them on his head all the way back to Ayodhya.  He ruled the kingdom as a guardian and representative, but not living in the palace.  He lived and ruled from a place called Nandigram, located in the outskirts of the city of Ayodhya.  More to come…