Brahma is the name we call the One God, when He/She is creating, also known as Creator-God.  Brahma’s own day and night is comprised of a few billion years each.  When Brahma’s day is over, He goes to sleep and utter darkness prevails with the earth is submerged in water.  This is called the Pralaya (Deluge), which continues throughout Brahma’s night.  When Brahma wakes up in his morning, the worlds slowly come out of the water and life prevails all over again.

Hayagriva was a very powerful Asura (evil being), a horse-headed demon who was causing a lot of trouble to the Devas (heavenly beings) and others.  Knowing that the Vedas were the breath of the Devas, sages and all virtuous people, Hayagriva conspired to take away the Vedas during Brahma’s sleep.  With the Vedas in his possession, Hayagriva planned to hide himself in the deepest abyss of the ocean so that no one could find the Vedas.  Without the Vedas, Brahma would not be able to create the universe, thus the Asuras could rule the worlds.  With this thought, Hayagriva was waiting for the Brahma’s night to come.

A great sage was living at that time, Satyavrata, who was a king who had become a great Master.   He was doing deep practices, absolutely devoted to Lord Vishnu, sustaining himself only on water, performing severe austerities.

Out of compassion, Satyavrata put the fish into his small water-pot (kamandala) and took it to his ashram.  The next morning, picking up his kamandala, he saw the tiny fish had grown to fill the size of the kamandala.  Hence, Satyavrata put the fish in a big tub.  The next day, the fish grew to fill the entire tub.  So the good sage put the fish and in a big well nearby.  Again, the next morning he saw the fish occupying the whole well, to his wonder.  He was really confused.  Out of pity, he carefully moved the fish to a big lake nearby.  To his consternation, he observed the fish growing, in a short time filling the entire lake. 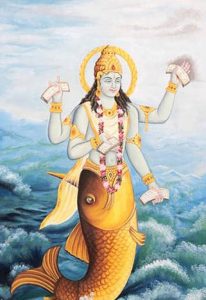 Now realizing that the fish is none other than Lord Vishnu, who has come in the form of a fish, the king-sage said, “Oh Lord Vishnu, it is you who has come in this form.  Accept my respectful salutation!”  Lord Vishnu in the form of the fish replied, “Blessings Satyavrata. Brahma’s night is coming in seven days.  This means darkness and severe downpours, resulting in an unprecedented flood covering the three worlds in water, destroying all life.  I have come to warn you of this deluge.  Gather the seven rishis, all the life species, life forms and seeds.  At the time of the Pralaya, a spacious boat will approach you.  Board the boat with all you have gathered and it will sail down the Ganges.  When it reaches the ocean, I will be waiting for you.  Tie the boat to my nose and I will drag you and the occupants of the boat on the turbulent water until Brahma’s night comes to an end.”  Then the fish disappeared in the water, saying, “I now need to go save the Vedas!”  Following Lord Vishnu’s command, Satyavrata gathered the seven rishis, along with all the life forms and seeds.  They waited for the seventh day and the arrival of the boat.

As soon as darkness fell and Brahma closed his eyes, Hayagriva stole the Vedas from the Creator and found his hiding place in the deepest part of the ocean.  As the Pralaya was approaching and the whole world was going under water, he thought no one could find his place.  But no hiding place was good enough for Lord Vishnu!  He found Hayagriva in the deepest part of the ocean and fought with him to get the Vedas back.  After a fierce battle, Lord Vishnu killed Hayagriva and took possession of the Vedas. 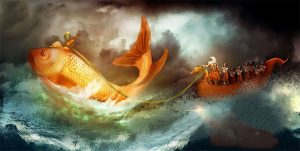 By this time, Satyavrata had boarded the boat with the seven rishis and all the life species, life forms and seeds he had collected.  The boat was sailing down Ganges, with the water was rising as the worlds were going under water.  When the boat approached the ocean, Lord Vishnu, in the form of the golden fish of an extraordinary size was waiting to help them to ride out the deluge.  As instructed, Satyavrata tied the boat to the fish’s nose.  Lord Vishnu pulled the boat through the Pralaya, and imparted to Satyavrata the eternal truth contained in the “Matsya Purana,” as well as all things connected with the secret knowledge of the soul.

Time passed.  At the start of Brahma’s daybreak, the floods subsided.  By the grace of Lord Vishnu, Satyavrata was safe in his boat with all the precious things, as well as the knowledge and spiritual wisdom he gathered.  It is he who became Manu, the son of Vivasavan, in the next eon-age.

After saving the worlds and the boat with Satyavrata and his collection, Lord Vishnu returned the Vedas to the rightful owner Brahma, who had risen from his sleep.  Thanking Lord Vishnu, Brahma continued his work, creating life in the worlds, never to lose the Vedas again.