Kamsa relentlessly worked on sending more demons to kill Krishna.  He sent Arishtasura the bull demon, Kesii the horse demon and Vyomasura the demon who took the form of a mountain.  They ended up with the same fate as the other demons, all of them killed by Krishna.  Seeing that all the demons were dead, even the very powerful and cunning ones, Kamsa panicked.  Kamsa was desperately trying to think of who to send next.

On the other hand, Sage Narada was impatient, wanting things to move faster so to have Kamsa’s tyranny come to an end.  Sage Narada approached Kamsa, seemingly in a helpful manner, praising Kamsa’s strength and power.  But Sage Narada injected more fear into Kamsa, warning not to let Krishna grow and get more powerful.  He reminded Kamsa who Krishna and Balarama really are. 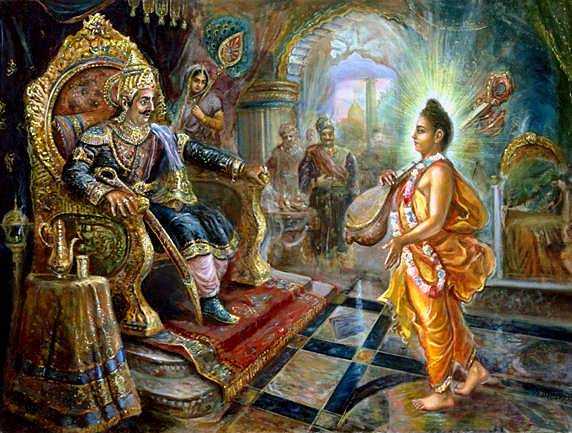 Kamsa summoned Akrura, a friend of his from the Yadava Kula, commanding him to extend the tournament invitation to Balarama and Krishna.   Devastated by the news, believing that this was a trap to kill Krishna, Akrura had to obey. Yet he was also happy that his longing to see Krishna and Balarama was becoming a reality.

Sage Narada’s aim of hastening the meeting of Krishna and Kamsa was accomplished.  The Sage left Mathura saying his usual words praising Lord Vishnu, “Narayana, Narayana,” knowing that the meeting will be Kamsa’s end.

Kamsa sent his best chariot to Akrura for fetching Balarama and Krishna.  Akrura traveled to Vrindavan with Kamsa’s invitation.  Being such an admirer of Krishna, when Akrura reached Vrindavan, he warned them about what he believed Kamsa was planning.  Krishna and Balarama looked at each other and smiled, as they accepted the invitation, even though everyone in Vrindavan was against it. 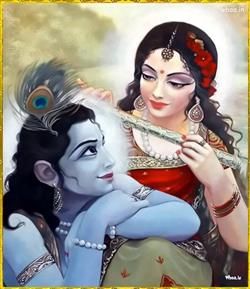 Knowing this will be his last day in Vrindavan, Krishna played his flute and danced, eating whatever anyone offered him.  There was heartache; as a human, Krishna knew this was the last day he would see Radha, his lifelong love.  Yet Radha, the other Gopiis and all the others in Vrindavan were singing and dancing, not knowing that it was their last day with Krishna.  At the end of the day, after dinner, he gave his flute to Radha as a token of love, asking her to keep it until they meet again, though he knew it was never going to happen.  That was the last day he played his flute until the end of his lifetime.  He knew that the playful mischief part of his life was over.

The next day, Krishna and Balarama got ready for their trip to Mathura, amid strong opposition from their parents and all of Vrindavan.  Yashoda was so worried that she didn’t know what she was doing, pacing up and down in the garden with no way to stop her son from going to Mathura.  Krishna calmed Yashoda, telling her it was the duty of a man to accept any challenge he received, and to face it with valor and dignity.  Balarama and Krishna mounted the chariot to leave for Mathura but getting out of Vrindavan took until noon, making it through the crowds to the outskirts of the village.

On their way, they stopped at the bank of River Yamuna.  At this stop, Akrura saw who Balarama and Krishna really were.  He saw the vision of Lord Vishnu on Adhishesha in place of Krishna and Balarama at the riverbank.  Akrura was in bliss and cherished that moment for the rest of his life. 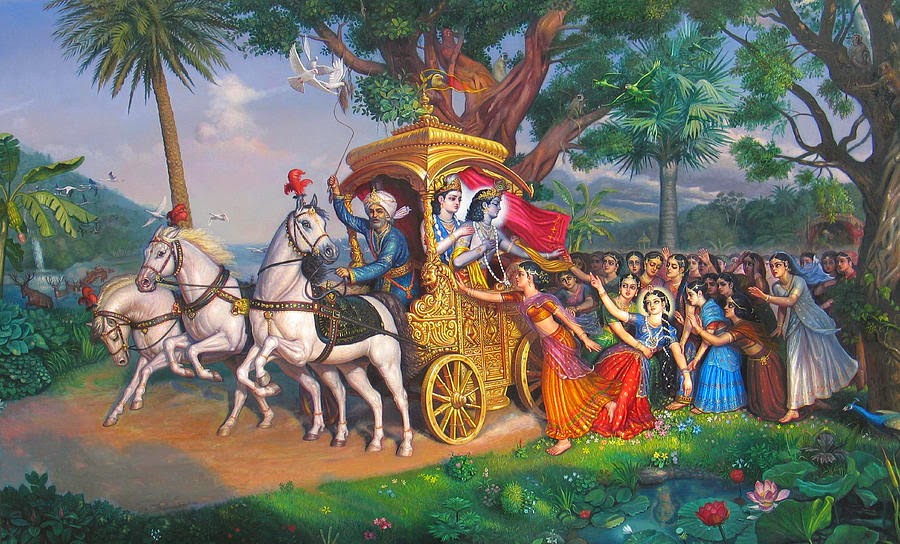 Akrura got them close to Mathura, wanting them to stay one night at his own home, on the outskirts of the city.  Krishna said he would definitely come and stay, but only after he ended the cruelty happening to his clan by Kamsa’s hands. Though Akrura was not happy, he accepted Krishna’s decision and dropped the brothers at the entrance of the city, then taking the chariot to Kamsa to inform him of their arrival.  Krishna and Balarama were delighted to see that Nanda and his clan from Vrindavan had arrived before them, having taken a shortcut.

Mathura was a very beautiful city with impressive gates including entrance pillars made out of marble.  The brothers walked around looking at the marvels of the city, clean broad roads, mansions, gardens, ponds and fountains.  While they were walking around, the news of their arrival spread like wildfire.  People gathered in huge numbers to see them.  Krishna performed a number of miracles while roaming in Mathura.  All the resulting pandemonium disturbed Kamsa.  He already knew that Krishna and Balarama had arrived, so he knew what the pandemonium on the roads was all about.  Kamsa felt he was on the brink of going mad; he knew no rest or peace that night. 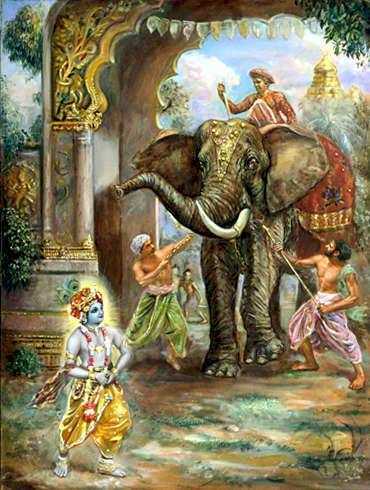 The brothers rested in a camp outside the wrestling tournament arena that night.   They woke from their sound sleep, had their baths and prepared themselves to go to the wrestling arena.  Hurrying along, they wanted to be there for the first event of the day.  They could hear the drums and the trumpets in the arena.  However, when they reached the gate to the arena, a huge elephant was blocking it.

They entered the tournament arena.  The arena was lavishly decorated with flags, flowers and garlands.  There were special stands, platforms and seats built for the kings, ministers, priests and other important people, including the wrestlers of Mathura.  The best wrestlers from the surrounding area entered the arena, ready for the challenge.

Kamsa entered the arena with his ministers and guards and sat in the special area arranged for him.  The drums were rolling and the music was playing.  According to Kamsa’s prior orders, Mathura’s chief wrestler, Canura, challenged Krishna for a match while the assistant chief wrestler, Mustik, challenged Balarama for a match.  They set the condition that the matches end only with death, thinking it was  going to be easy to finish off the cowherd boys.  Krishna and Balarama accepted the condition.

There was a lot of audience commotion in reaction to the conditions.  The audience thought the combatants were not equally matched, and some left the arena thinking it was unfair.  Others stayed to encourage the brothers, while those on Kamsa’s side wanted the match to take place.  There was support for both sides. 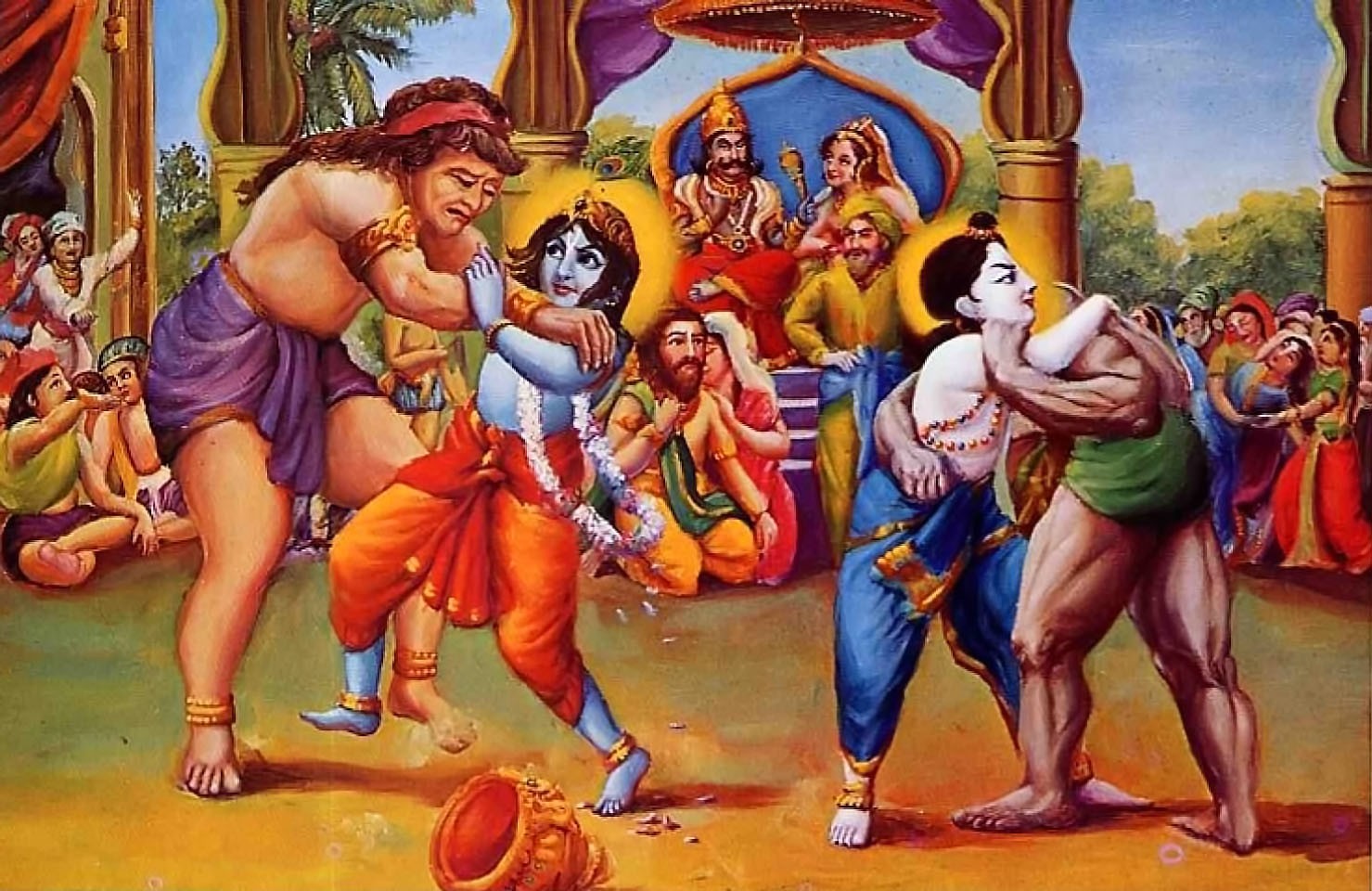 Filled with anger and fear, Kamsa jumped out of his chair.  He commanded his royal guards to drive the boys out of Mathura, to put Nanda in chains and to kill Vasudeva, Devaki and his own father Ugrasena, who were in the dungeon.  Before Kamsa could finish his command, Krishna jumped on to Kamsa’s royal platform.  Catching Kamsa him by his hair at the nape of his neck, Krushna pushed Kamsa down to the wrestling floor.  Kamsa’s crown and Kamsa tumbled down the stairs to the platform, falling on to the wresting ring. 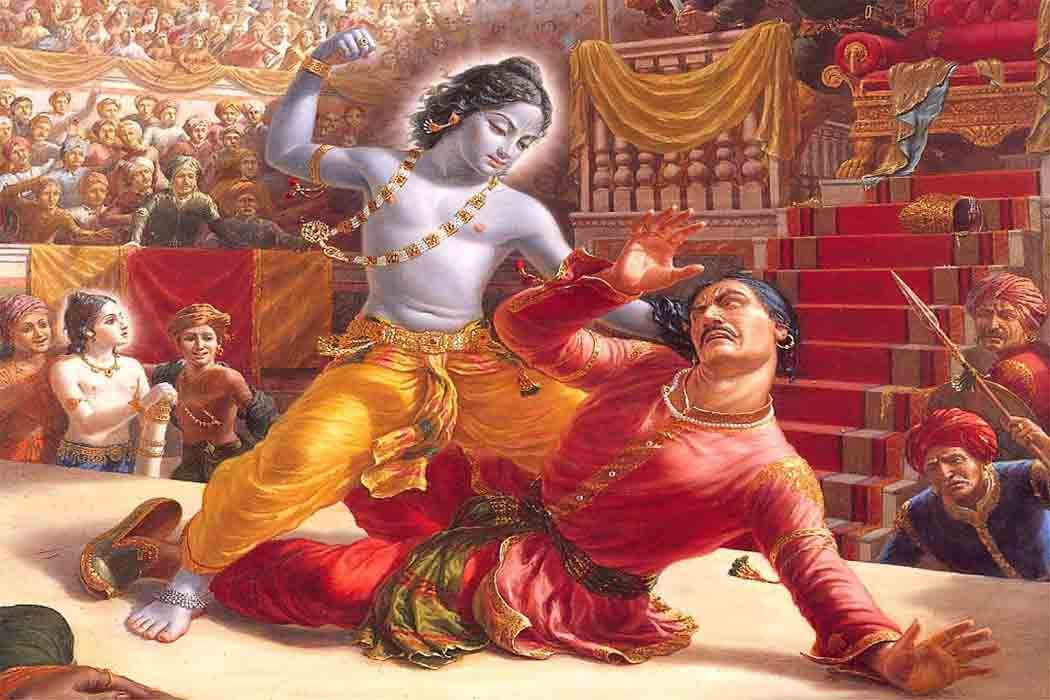 Krishna leapt from the platform down to the wrestling ring and straddled Kamsa’s belly.  Terrified, his past actions flashing before him, knowing the prophecy was coming true, Kamsa couldn’t say a word.  Krishna’s bare handed blows killed him.  A great roar and cheer went up from the crowd.   All the people who had earlier left the arena returned, surprised on hearing the news.  Kamsa’s eight brothers sought revenge for their brother’s death, ending up with the same fate.

Though Kamsa had been thinking negatively of Krishna, he was thinking of Krishna twenty-four hours of the day, three-hundred-sixty-five days of the past many years, since the day Krishna was born.  Due to this, Kamsa was cleansed of all his karma and became one with Krishna at his death.

After Kamsa’s death, Krishna and Balarama rushed to the dungeon and freed Vasudeva and Devaki from their chains.  They fell at their feet and bowed with utmost respect and received their blessings. Vasudeva and Devaki’s happiness at seeing their sons after all these years is beyond the power of any words to describe.

The boys then released Ugrasena, the rightful king, who had been in prison all these years.  They crowned him as the king again.  All the people of Mathura were in joy as their benevolent king was reinstated in full power once again.