The whole town of Gokul was in joy, especially Nanda and Yashoda, the new parents of Krishna, named for his dark complexion.  The cowherds of Gokul were so happy that their leader had a child to continue leading them that they decorated with garlands to celebrate Krishna’s birth.  From that day onward, the life of all the Gopis (milkmaids) and Gopalas (cowherd boys) revolved around Krishna, the divine baby.

But in the city, King Kamsa was very upset that he had been unable to kill Krishna, the prophesied eighth child.  Still targeting the children who were born in the month of Shraavana, Kamsa sent out one of his seven demons, Trinavarta, to hunt for the eighth child.

Trinavarta could change himself into a whirlwind.  He roamed all around and came to Gokul.  Krishna was at the crawling age.  Yashoda was cradling him on her lap but felt his weight as unbearably heavy for some reason, so she put him on a mat on the floor and went about household work.  Knowing Trinavarta was in the area, Krishna crawled to the doorstep so that Trinavarta could see him. 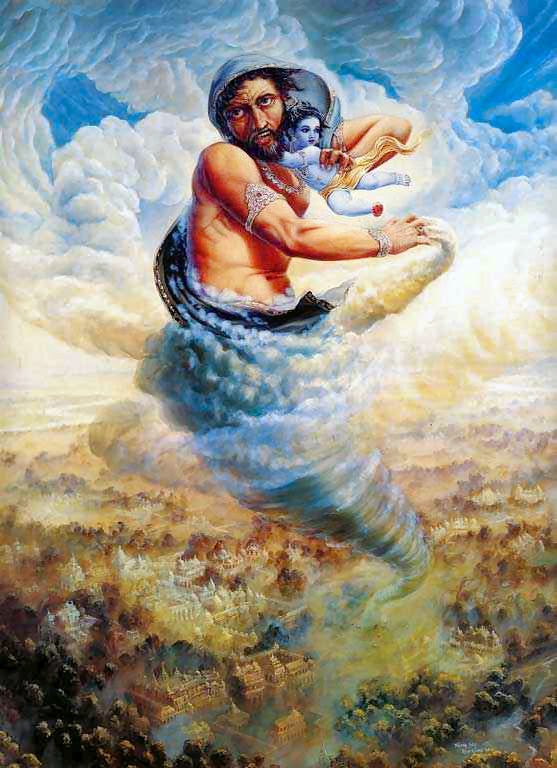 Trinavarta saw Krishna, whose appearance matched what he was seeking.  Becoming a whirlwind, he made the whole of Gokul dark with the dust, picked up Krishna and took him away.  Yashoda came checking on Krishna, found him missing and fainted.

Trinavarta carried Krishna for a while but found Krishna’s weight increasing.  It increased to a point where Trinavarta was unable to carry Krishna anymore and fell on the ground, coming out of his whirlwind form.  He fell with Krishna on top of him.  The weight of Krishna increased to a point where Trinavarta choked and died under the unbearable weight of Krishna.  The villagers found Krishna playing on the chest of Trinavarta’s body.  They picked Krishna up and Trinavarta’s body turned into dust.  This was another failed attempt by Kamsa.

Krishna was so powerful, as made evident on another occasion.  This happened on his first-year birth star (janmashtami) ceremonies.  The whole of Gokul was invited, including the wise and learned pundits who beautifully recited Vedic hymns to bless Krishna.

Yashoda gave Krishna a holy bath (abhishek) and got him ready for the ceremony but, after the bath, little Krishna fell asleep.  She laid him under a cart outside for shade, a cart filled with heavy items.  Yashoda asked some older kids to keep an eye on Krishna.  She got really busy, taking care of the pundits’ and the guests at the ceremony. 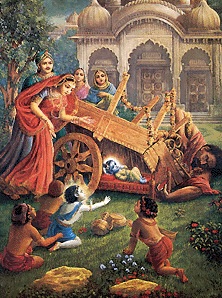 Baby Krishna woke up and started crying, wanting milk.  With all the noise around her, Yashoda couldn’t hear his cry.  Krishna got angry and kicked the wheel of the cart with his tiny feet.  The huge heavy cart crumbled down into pieces.  No one in Gokul could believe that Krishna was the one to wreck the cart.

These events confirmed to the Gokul residents that Krishna was not just any child.  But what they didn’t know was that cart wheel was none other than a demon named Shakatasura who was sent by Kamsa to kill Krishna.  Shakatasura attained mukti (liberation) due to the fact that the Lord’s feet touched him.

Krishna was growing up fast in Gokul, his brother Balarama by his side.  They loved each other so much that one couldn’t live without the other.  Both of them were very mischievous.  Especially Krishna, who would provoke Balarama and all their friends into doing mischievous activities.  Sometimes they would grab the ends of the tails of the calves.  The calves would then run here and there.  The children would hold on to the tails tightly, pretending they too were scared.  The Gopis would come to their rescue and it all will be very dramatic.

Krishna and Balarama would go into all the houses in Gokul, stealing the curd (yogurt) and butter from the household, most of the time escaping, but sometimes getting caught.  Everyday there were a few villagers at Yashoda’s and Rohini’s doorsteps, complaining about the kids.  But there was no way to stop the brothers from stealing the milk, curd and butter.

All the brothers did was sit silently, like good boys, yet they were planning the heist for the next day.  Different strategies and different techniques had to be planned every day as the villagers made hurdles and preventive methods against the previous strategies the brothers had used.

For example, the pots containing the curd and butter were usually kept on the floor. Then the villagers moved the pots to high tables.  When that too didn’t work, they hung the pots from the roof.  The brothers were so bad that, if they were unable to get to the curd and butter, they broke the pots and ate whatever they could, making the rest unusable.  The villagers were having quite a time with the mischievous brothers.

Krishna was always the leader, while he made sure he shared it with all the kids in Gokul, thus they were always on his side.  He shared it not only with his human friends, but also with his animal friends, especially with the charming monkeys, who were as mischievous as he.

Yashoda and Rohini didn’t know what could be done.  However, much punishment was given to Krishna and Balarama, they always found a way to convince their mothers to forgive them.  One day, Yashoda and Rohini sat the two brothers in the garden and made sure they didn’t get any food, as their punishment.  The brothers were hungry.  Krishna took a handful of dirt, ready to put it in his mouth.  Balarama saw this and thought their mothers would be angry if he let Krishna eat dirt.  Trying to stop Krishna, he couldn’t get the dirt out of Krishna’s mouth.  He took Krishna by his hand and pulled him over to mother Yashoda, telling her that he tried to stop Krishna from eating dirt. but Krishna wouldn’t listen. 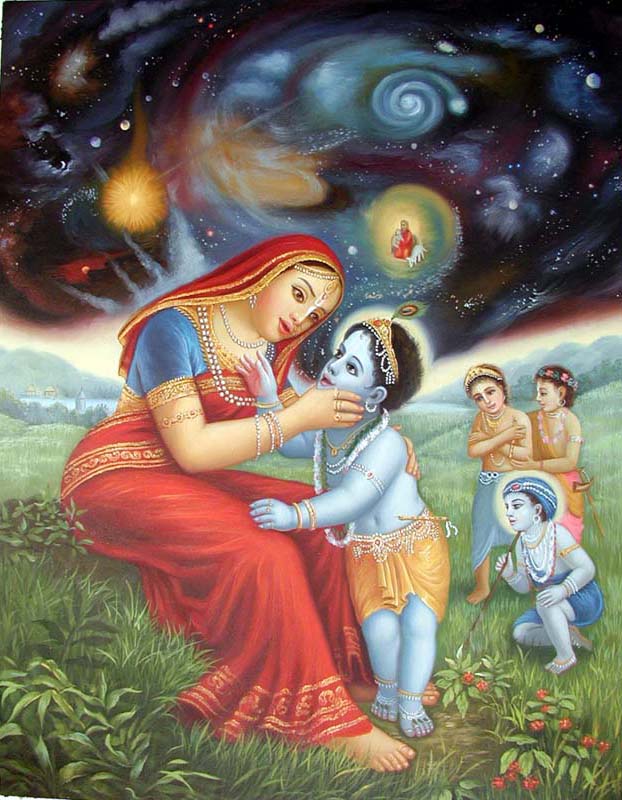 Yashoda was worried that Krishna was going to get sick and asked him to open his mouth so she could get the dirt out.  First, he refused to open his mouth, then later he opened it, due to his mother being persistent.  Yashoda looked inside Krishna’s mouth and saw all the worlds, stars, galaxies and universes in it, including all that exists, movable and immoveable.  Most surprisingly, she saw herself just as she was at the very moment, looking in her darling Krishna’s mouth.  Unable to comprehend, she fainted and fell on the floor.

On regaining consciousness, she was unable to describe what she had seen.  All she could do was hug Krishna and not let him out of her arms for the longest time.  It was the play of Lord himself, filling her with great maternal affection, making her forget the vision she’d witnessed.

The complaints about the butter thieves kept on coming.  On another day, Rohini locked Balarama in a room.  Yashoda took a stick in her hand and chased Krishna, who was running as fast as he could, through houses, courtyards and gardens.  At last she caught him!  She tied Krishna to a mortar.  Of course, the Lord let himself be caught by his mother.

She was bewildered and got tired of trying to tie little Krishna.  Lord Krishna felt compassion for his mother and decided to get bound, because of her true love for her son.  Yashoda thought that the mortar was so heavy that small Krishna would not be able to get around to his mischiefs.  She went to the kitchen to continue her household work.

Krishna couldn’t stay long.  He got bored so he started pulling the motor around the garden to try and get free from it.  He came across two gigantic arjuna trees, growing side-by-side.  Thinking that was the way for his great escape, he pulled the mortar between the two trees, thinking that will free him.  But, with his mighty power, he uprooted both the trees, which fell on the ground with a thud.  Two celestial beings appeared out of the trees.  They worshipped Krishna in a thankful manner and disappeared joyfully.  Who are these two celestial beings? 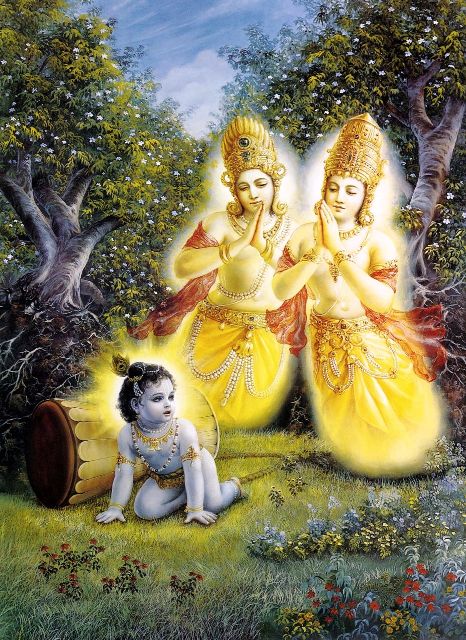 Once there were two brothers named Nalakubera and Manigriva, sons of Kubera, the king of wealth.  Handsome and wealthy, they were accustomed to worldly enjoyment such as drinking, smoking, dancing and pursuing other mundane desires.  One day they were so enamored of their wives that they didn’t notice the arrival of the great Sage Narada.  Insulted by their behavior, Narada cursed them to remain as two trees in Gokul forever.

Hearing this, their wives fell at the sage’s feet, asking him to forgive their husbands and take back his curse.  Narada relented, but a curse once given cannot be retracted; it can only be modified.  So Narada amended the curse, such that Lord Vishnu would release their husbands when he incarnates as Krishna.  Thus, Lord Krishna fulfilled the prophecy of his dear devotee Narada.

Yashoda and Nanda heard a thunderous sound, as if a thunderbolt had struck the village, and came out running.  The found that Krishna had uprooted the two huge trees which had been next to each other in the garden.  Shocked to see what Krishna had done, Yashoda stood amazed.  It was, after all, impossible for a little boy to knock down two huge trees.  But they remembered the words of Garga Muni, who named Krishna, announcing that the Supreme Lord had appeared as this child.