Though Devaki’s seventh child was presumed dead in her womb, he had been transferred to Rohini’s womb in Vrindavan.  When born, he was called Balarama, Lord Vishnu’s eighth avatar.

Kamsa knew the prophesied eighth child was next.  Thinking that prevention is better than cure, he ordered Vasudeva and Devaki chained to different pillars of the dungeon so that they could not be with one another.  Kamsa was happy with his brilliant plan to stop the birth of the baby.  Vasudeva and Devaki were so heart broken.  They prayed to Lord Vishnu, as they didn’t have any way to bring the eighth child, who would end Kamsa’s tyranny.

By the grace of Lord Vishnu, Devaki became pregnant.  Kamsa was both upset and puzzled as how his plan didn’t work.  With the help of his guards, he’d been monitoring every move of Vasudeva and Devaki.  He was so worried that he ordered extra guards added so that he will be informed as soon as the eighth baby was born.  Thus he could kill that baby too and get rid of the threat that came from the voice from the sky.

At the same time, in Gokul, Yashoda was also pregnant.  Nanda and Yashoda were jubilant about expecting a child, as they had been childless for a very long time.  As planned by Lord Vishnu, he himself was growing in Devaki’s womb while Yoga Maya was growing in Yashoda’s womb.  Vasudeva and Devaki were worried, not only for their baby’s safety, but for the greater good of their kingdom. 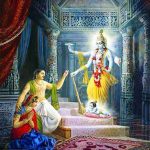 As she got closer to delivery, Lord Vishnu appeared to them, affirming he will be born as their eighth child.  He also revealed that this is the third time he is being born to them, according to their wishes from a previous birth.  He told them to take the baby to Gokul and switch him with Vasudeva’s friend’s (Nanda’s) baby.  Then he disappeared.

This brought great peace and joy to Vasudeva and Devaki.  Yet they wondered how to switch the babies while they were chained in the dungeon with all the added security around them.  Everyone has to have something to worry about at all times!

He was born on the eighth day of the waning moon, called the Krishna Paksha (dark side) Ashtami (eighth), in the lunar month of Shraavana (August-September), with the constellation of Rohini in the ascendant.  Late in the evening, the sky was dark due to it raining heavily with thunder and lightning.  Just before Devaki went into labor, all the guards fell asleep.

Devaki gave birth to a beautiful divine baby boy, who was as dark as the clouded sky and with beautiful curly hair.  As soon as this divine baby was born, the chains binding Vasudeva gave way and fell on the ground.  What a miracle!  The guards were asleep and Vasudeva was free. 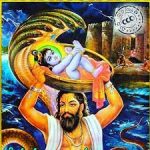 Though they didn’t want to part with the baby, Lord Vishnu’s command to switch the babies had to be obeyed.  With tears in her eyes, Devaki handed the baby over to Vasudeva.  As soon as he took the baby into his arms, the dungeon doors opened.  Putting the baby in a basket, he carried the basket on his head, right out of the dungeon.  He found the castle doors open.

It was so dark that Vasudeva couldn’t see the direction to go.  He looked up to the sky and another miracle occurred.  The clouds gave way for the moonlight to guide him, even in the midst of the thunderstorm.  Adhishesha, the five-headed serpent, immediately appeared and spread his hood over the basket, protecting the baby and Vasudeva from the gusty wind and heavy rain, doing his seva to his beloved Lord.

Vasudeva walked as fast as he could towards Gokul.  He came to the banks of the river Yamuna, flooded and flowing wildly due to the rain.  Vasudeva had to cross it.  Stepping into the river, he started across.  The water level rose higher and higher, up to Vasudeva’s nose, as though the river Yamuna was eager to touch the baby.  The baby put one of his feet out of the basket and touched the water; instantly the water level subsided.  The river Yamuna gave way, giving clear ground for Vasudeva to cross.

After walking for hours, Vasudeva reached Gokul.  When Vasudeva entered Gokul, everything stopped.  Nothing moved.  It was as though the universe had come to a standstill.  Vasudeva walked to Nanda and Yashoda’s home.  A baby girl lay next to Yashoda, who had been born at the same time Devaki had given birth.

Vasudeva switched the babies and carried Yashoda’s baby the same way he’d carried his own, on his head in the basket.  As soon as he left Gokul, everything was back to normal movement.  He was able to return to the dungeon before daybreak.  The doors remained open and the guards were still asleep.

As soon as he entered the dungeon, all the doors shut themselves.  Vasudeva gave Yashoda’s baby to Devaki.  The chains grabbed on to Vasudeva again.  Nothing looked changed.  All of what happened was incomprehensible to Vasudeva and Devaki, but they knew it was all Lord Vishnu’s doing.  They had a moment of relief when the baby started crying, which woke up the guards, startled from their slumber.  Not knowing what had transpired, one of them ran to Kamsa to inform him of the birth of Devaki’s eighth baby.

Kamsa jumped up from his bed and rushed to the dungeon.  He saw the baby next to his sister, Devaki.  Devaki screamed, begging for mercy, saying that it is a girl and not to kill her.  Neglecting Devaki, Kamsa picked the baby up by its leg as usual, laughing arrogantly. 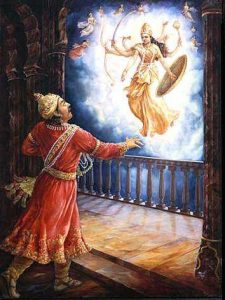 When Kamsa swung around to throw the baby into the dungeon wall, the baby (Yoga Maya) slipped out of his hands and appeared as a bright light in the sky.  With derisive laughter, she said, “Fool, you will not be able to kill me and even if you did, what is the use?  The one to kill you is safe elsewhere not too far from here.  You cannot escape from him, however mighty you may think you are!  The only reason I’m not killing you now, is due to you touching my feet.  Thus I bless you that the Lord himself will kill you.  It is so great to have the chance for this blessing!”

After saying this, Yoga Maya disappeared.  Kamsa was shaken to his core, unable to understand what had happened.  He returned to the castle, hearing his sister say that he cannot alter his fate however much he tries.  These words, reverberating in his ears, piercing his heart with guilt and sorrow, for torturing his sister and her husband.  Yet his arrogant mind won him over.

The whole town of Gokul was in joy, especially the delighted parents, Nanda and Yashoda.  No one knew how, what they thought was a baby girl the previous night, is actually a baby boy in the morning.  But no one cared and didn’t have the time to think about it, as the baby was with a smiley face, attractive radiant eyes and dark mesmerizing divine look.  For the dark complexion, the baby was named Krishna (Krishna = dark in Sanskrit).

The people in Gokul were cowherds.  Nanda was their leader.  They were so happy that their leader had a child to continue leading them.  They decorated the whole of Gokul with garlands and celebrated Krishna’s birth on a large scale.  From that day onward, the life of all the Gopiis (milkmaids) and Gopalas (cowherd boys) started revolving around Krishna, the divine baby.

Kamsa was very upset that he had been unable to kill Devaki’s eighth child.  He devised a plan to kill all the newborn babies who had been born in the month of Shraavana, so that Devaki’s son also will be killed.  He called upon a demoness called Putana to implement his plan.  Putana started her work, disguising herself as a noble lady, going around and poisoning all the babies born in the month of Shraavana.

This dreadful news reached Vasudeva’s ears.  Nanda, as one of the chiefs in Kamsa’s kingdom, came to pay his taxes in Mathura, the capital city.  Vasudeva took advantage of this opportunity to meet his dear friend Nanda.  After congratulating Nanda about his newborn, he also inquired about Balarama growing up in Gokul.  Then Vasudeva succeeded in warning Nanda about the danger to his newborn baby.  Hearing this, Nanda rushed back to Gokul right away, fearing for the safety of his beloved son.

Meanwhile, Putana entered Gokul.  It was the tenth day her search.  She heard about Nanda’s son, who perfectly fit the profile of who she needed to kill.  Looking to be a beautiful and charming lady, Putana comes to Yashoda’s house as a guest.  Yashoda and the other women in the house let her be in their midst.

Putana saw this most attractive, radiant baby in the cradle.  She started getting caught up in Krishna’s beauty when she remembered the orders of the cruel king, Kamsa.  Putana had come prepared, with poison to apply to her breasts in order to kill the baby.  This technique had worked on hundreds of babies around the area for the past ten days. 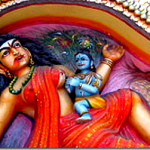 She took baby Krishna in her hands, kissing him, and put him to her breast.  Krishna suckled her life out of her.  Putana fell dead on the floor, revealing her true form as a demoness.  Her body was so huge, yet Krishna was smiling and playing on her lap.

The elder Gopiis immediately picked Krishna up from Putana’s lap, everyone amazed to see what had happened.  Nanda returned from Mathura just in time to see Putana’s body.  All thus knew that she was the rumored child-poisoning woman, roaming in the area and killing all the newborns.  They didn’t know how Putana was killed, but everyone was thankful and prayed to Lord Vishnu the savior for protecting their little Krishna.  They definitely knew that Krishna was not an ordinary child.

The people of Gokul cut Putana’s body into pieces and cremated it in a wood fire so that no one would know she’d died in Gokul.  She died at the hands of Krishna, so she was freed from her sins, completely purified.  The burning of her body parts produced an incense fragrance, as opposed to what everyone expected the smell to be.

Putana was missing in action, and Kamsa didn’t know what had happened.  He waited for her return for weeks, finally realizing she is no more and that his plan had failed.  Not knowing how and where Putana died, he was unable to find the eighth baby.  He continued with his atrocious activities against all the people, devising further plans to hunt and kill the eighth child of his sister.